In order to make up content from the cancellation of the NHL season, in what should really be an annual tradition, Fox Sports Ohio will be re-airing the Blue Jackets' historic sweep of the Tampa Bay Lightning. Game 1 starts at 8 PM EST Wednesday, with the rest of the series following each day at the same time. In celebration of this, I think I'd be fun to comb over the original GameThread from Game 1 in order to relive our reactions to the events of the game live. Fun fact: I actually missed most of this game live due to an Ultimate game, and didn't get home until the last 10 minutes!

WalterC1: "Prop bet…. How many minutes into the game until the first "Whelp" on the Cannon?"

The first Whelp technically came before the game started, but that was just PD being PD in order to claim the first one. We'll see when the first real whelp comes...

How much better would it be if we swept them? Ah, little did we know...

Dale B.: "Why is my NHL TV blacked out?!" FLSteve: "USA Network if you have it" MrSwift13: "On the other hand, the radio exists. Never Pierre" Dale B.: "I don't have a choice [in watching national] and I'm sad. This is just going to be a Tampa Bay love fest"

Because the NHL's broadcast system sucks. I honestly do not understand it. But I'd say it's less Pierre being bad and more McElligot being amazing at radio that makes listening to the radio not a terrible option. And yes, the national broadcast would just be a Tampa Bay love fest? Remember when they were saying they'd do a reverse sweep? Yeah...

GiantBuckeye: "I said it a week ago and I say it again tonight, if you look at rosters there’s one team deep enough to beat the Lightning— the Columbus Blue Jackets."

I'm pretty sure this was correct. Knowing how everything else turned out, I think only maybe the two finalists had a chance, and I'm not certain on the Blues. You're welcome, St. Louis.

Joe_Danger: "Hello Everyone. Bruins fan, we aren't playing today and I just wanted to talk about hockey with some people. Is it just me or was that kind of a weak call on the headshot in the playoffs? I thought the 2nd hit was more penalty worthy"

After a questionable hit by Girardi (questionable hits would be kinda a thing in this series), a line brawl followed. This is when we found out players could only get a minor penalty for a hit to the head, and also the first appearance of Joe_Danger, a Bruins fan who'd be a welcome guest throughout the two rounds. Upside, Blue Jackets get a powerplay!

Pale Dragon: "Whelp" "Let’s not let the shorty distract us from the fact that it was an atrocious power play prior to that turnover"

And... the Lightning score a shorthanded tally. PD got the first Whelp anyway. And PD was right, that power play was quite bad, as was Seth's turnover leading to it. Thankfully that'd get fixed later.

ALeeRocks: "I appreciate your optimism, but the problem is against that team, the Jackets need to play an almost perfect game so they cannot afford any of those… Plus, we are now chasing the game against that team…" WalterC1: "I’m not saying [Bob letting in the goal] was weak. But he’s gonna have to stop the near impossible of the Jackets are gonna win a single game." Elpalio: "On to Game 2!" 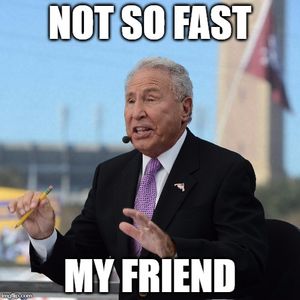 StinerMan67: "Yes. Angry Torts!!! The audio kept going out though" WVPiratesFan: "I think Torts dropped at least 10 f bombs in that excerpt."

And FSO just showed the now iconic "Mindset of Believing" clip. Easily the best quote in Blue Jackets history. Might even look good on a shirt or something.

So Lightning does strike twice (sorry). But this is an early contender for the best string in the series, looking back on it.

Korrupt: "Allowing goals like that last one is really going to lose Bob money isn’t it…."

I mean I'm not sure how much more he could've made... good luck with that, Florida.

WalterC1: "The real question should be, can we score a single goal?"

DevilPenny: "Every time we blow first periods we always come out like hellions in the second. So there’s that going for us."

Korrupt: "At some point do you consider switching out Bob for Korpi or Kinkaid? Or is that rearranging deck chairs?" Pale Dragon: "Korpi’s the backup tonight. Is it the difference between winning and losing tonight? No. Would it stop the bleeding? Maybe. But it could have more damaging impact on Bob’s psyche to get yanked so soon" LACoopa: "Devils advocate: who cares he’s not a Jacket after this is over? Look. I love Bob. He’s been my favorite since becoming a regular starter but he’s fragile under pressure and I’m over it." "This is me preparing to move on. He is my favorite player and it’s time to let go. I’ll happily eat these words if he can get his act together and win this series" WalterC1: "Spoiler Alert: He won’t."

And it's now 3-0, and everyone wants to pull the plug. Can't blame them. Then another humorous exchange on the impossibility of a comeback, but a bit saltier since Bob left.

GHPH: "Unless something changes drastically, it’s looking like a Lightning sweep…"

Announcer voice: Little did they know, something would change drastically.

Tango7: "Oh I think Carolina may have surprised you. they are not as mistake prone or fragile as the Jackets just lack the pieces of talent we have"

Pale Dragon: "Alright, there’s a nice save by Bob" AKbax: "According to Pierre Tampa was unlucky" Pale Dragon: "Look, I’m watching FSO specifically so I don’t have to listen to Pierre"

Bob makes a stellar save that probably was the turning point in the series, and Pierre gets called out for homerism. Great moment, all in all.

WVPiratesFan: "O CAPTAIN MY CAPTAIN!" Elpalito: "Woo.. converting a breakaway. CBJ have to take advantage of their mistakes too!" WalterC1: "Small momentum shift. Build on it Jackets"

And the comeback begins! We have life from the leader of this team. AprilFools with the Cannon photo. And they would build upon that shift.

DevilPenny: "Our 2nd periods are always better after we nap through the 1st. We’ve definitely stopped the bleeding, another goal for us would be YUGE"

Pale Dragon: "BOB!!!!!! Huge save. Now we go into the break with the most dangerous deficit in hockey"

Going into the locker room without letting in a goal was a huge confidence booster. Bob making stellar saves to start and end it was even better.

Pale Dragon: "Dubi’s in pain. Took a hard fall on his back"

This may have been when Dubinsky career ended, unfortunate considering Game 1 was one of his better games in his career.

And the Jackets are within 1! Huzzah! Life has returned to the GameThread!

Elpalito: "If I was a hockey player, I’d have a piece of razor blade taped somewhere to ensure blood every time. It works in WWF!" Pale Dragon: "or a ketchup packet"

And, the Lightning now have a four minute power play. Great. Bit of a flop, but blood was drawn. Need a big Penalty Kill here.

And we're tied! Anderson with the Shorty! I couldn't find a more eloquent response than Stiner's

Ernie Pantusso: "I’m trying to come up with words to say and I just can’t. I love the playoffs. LET’S FINISH THIS. COME ON JACKETS!!"

I'm pretty sure this is the only time this guy has ever commented here, yet it perfectly describes the emotions of this game.

Elpalito: "McElligot hasn’t given the time in the game since the first period. Can I get a time?" WVPiratesFan: "4:20"

CBJFakeGM: "They gotta keep the pressure on Tampa. If they give TBL room to settle the puck & make the pass, it’ll kill them. The Jackets have to make Tampa rush & the passes and be on top of the receptor. Body-up on defense & have active sticks !! Balls to the wall for 3 minutes. They look stronger than the last 15 minutes of the 1st period!"

My god, this was the most stressed I've ever been during a game. Basically that's what I was thinking the entire time. I hated it. I loved it.

Uhm, Nyquist wasn't on the team yet

BurkusCircus52: "Also what’s the difference between a gun and a cannon? Besides size"

I still don't have an answer for this question.