For those who don't know, there's a large community of amateur jersey designers on the internet. I'm one of these creator, and I post my designs on Instagram (@burkus_circus_studios), as well as submit them to multiple sites for review. The idea is pretty simple: You take a jersey you don't like, and make a mockup of a redesign that fixes it's flaws. Or just completely redesigns it. Or just completely makes something from scratch. Everything's up to the designer. If I wanted to, I could make a teal and yellow Blackhawks concept. It'd be a terrible idea, but I could.

In case I hadn't made myself clear, I don't like the Blue Jackets' Reverse Retro jersey. My main gripes come down to two main things: The red base, instead of Blue for a team called the BLUE Jackets and the main feature being the large full-length yoke, instead of actual striping. Let's start with a simple fix of that first issue: 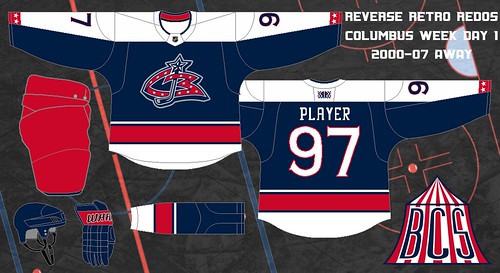 From the original away jersey, the blue and white are swapped. From the Reverse Retro, the red and blue switch. Insert the shoulder patches of your preference, be that the current primary, current alternate, Stinger, or hat logos. Is this jersey particularly great? No, I'd still put it as decently mediocre. But imo, it's miles above the unveiled jersey.

However, there's an even better option from the Blue Jacket's inaugural season: basing a jersey off the unused Prototype that was to be used for the 2000-01 NHL Season. Why this jersey never saw the light of day, we'll never know. But it does make for a sick Reverse Retro: 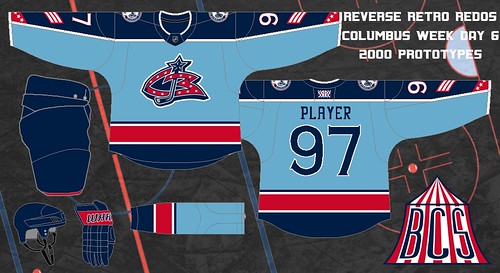 This is better than the above concept (and thus the Prototype is better than the actual original) for several reasons. For one, the yoke has more visual interest, with trim, the cuff stars in a V, and a military chevron that almost serves as faux-striping. It's a double blue color scheme, and double-blue is REALLY hard to screw up. Plus the powder blue color is a much more dynamic and interesting base color than navy. It's distinct from any of the other CBJ jerseys, it has actual visual interest, and would probably look great on the ice. Miles better. Plus the home has a yoke too!

Before we get into the non-CBJ designs, let's look at the idea that literally every concept designer has done: Take the Jackets' alternate and move the colors around. 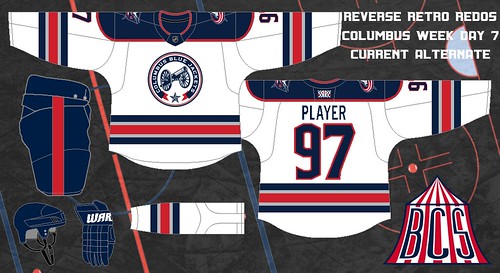 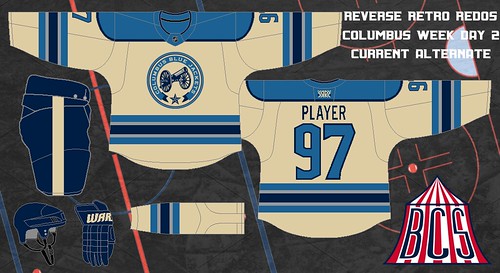 It's probably a bit too recent for the Reverse Retro series (the only team that used a current jersey was the Montreal Canadiens, mostly because they literally haven't used anything else since 1917). But that doesn't make this a great design. If you've read my comments on this topic, you'll know that I love this jersey, and that it's far and away the best jersey in Blue Jackets history. Using the primary colors allows us to add the primary logo on the shoulder, but I really like the vintage white base, as no other Reverse Retro used that color as the base, and it's secondary color is royal blue, which looks great!

Now, let's dive into the non-CBJ jerseys. First is a design taken from the first NHL team in Ohio, the Cleveland Barons: 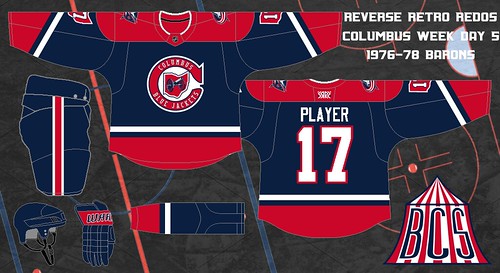 Now, this concept is a bit of a long shot, but I think it looks great! The Barons looked great for their two seasons in the NHL, and their brand is easily adaptable to the Blue Jackets. The Jackets have also never had a jersey where red was the predominant secondary color, and man does it look great here! Now, I don't think that this will ever happen for a couple reasons. For one, the Barons' franchise history is co-owned by the Dallas Stars and San Jose Sharks, meaning that two teams would need to give the Jackets approval. Also, no team has ever used a throwback to a different city for the Winter Classic, Heritage Classic, or Reverse Retros. It'd a fun idea, but the least likely of these.

Next up is a similar route as the Golden Knights went with, using inspiration from the city's first hockey team, in this case the Columbus Checkers: 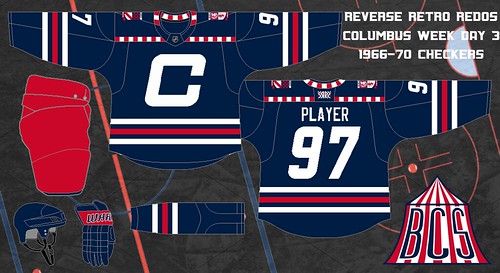 The Checkers played in the IHL at the Taft Colosseum on the Ohio State Fairgrounds. They wore these jerseys doing so, except the navy was black and swapped for the white. It's a unique look to be sure, but one that was definitely made in the 1960s. The Checkerboard pattern on the yoke is a nice and unique touch, but beyond that it's pretty basic. Basic striping. Basic logo. Basic colors. Definitely better than what they unveiled, but it isn't exactly a great design either.

Fast forward 30 years, and we go from a definite 1960s design to a definite 1990s design. The Checkers may have been the first Columbus hockey team, but it was the Chill that brought the Blue Jackets to Columbus. And what better way to honor the team's 20th Anniversary then to honor the club that made it all happen? 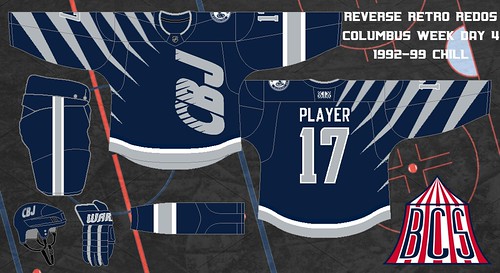 Here, the black is subbed in for the Blue Jacket's navy, and the white for grey to keep it closer to the Chill brand and distinct from other CBJ jerseys. The vertical "CHILL" has been swapped for "CBJ", and the Cannon patch has been added to one of the shoulders as well. This was probably the hardest concept I've ever made, but man does it look sick. I've always wanted to get a Chill jersey, and its a shame the Reverse Retro couldn't have been a substitute.

What do you guys think? Which of my redesigns is your favorite? If you enjoyed, go follow my Instagram page @burkus_circus_studios, which has redesigns posted for Anaheim through Montreal as well, with the rest of the league on the way!