After a long weekend of teasing, the Columbus Blue Jackets unveiled their entry into the "Reverse Retro" series, a new League-wide collection of jerseys from the NHL and Adidas for the 2020-21 season. 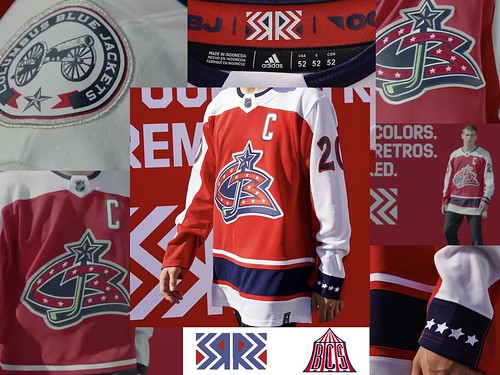 The jersey, as implied by the "Reverse Retro" designation, is a remix of the team's original away jerseys, as worn from 2000-2007. The only difference, aside from the switch to a new template, is that the white base has been swapped for red, the blue yoke subbed in for a white one, and red hem stripe made blue.

Columbus's original "CJB" monogram logo returns to the front, with the team's alternate cannon logo on the shoulder. The number font from those original jerseys returns, with player name and back number in white, with a blue outline on the numbers. The sleeve numbers are blue with a red outline. From the team's press release:

The adidas Reverse Retro program creates a new formula to showcase the passion of the fans. The overarching design theme during adidas' two-year-long process was to mine each team's jersey archive and team colors, remixing them to create something new and never seen before. With that in mind, adidas created uniquely distinct and desirable jerseys that incorporated inverted team colors. ...

Red, White & Blue, the colors represented on the state flag of Ohio, have served as the Blue Jackets' primary colors since the club's inception. This Reverse Retro jersey, however, marks the team's first primarily red jersey and features the original CBJ crest worn from 2000-07. The jersey features white piping around the neck that extends from the shoulders to the top of each sleeve, where a patch of blue resides containing four white stars. The bottom of the red jersey is white with blue and white piping. The jersey also includes shoulder patches featuring the club's secondary cannon logo.

The CBJ ligature served as the club's primary logo from 2000-07 and tied the theme of tradition and history to the modern day. It features a star-studded ribbon unfurled in the shape of the team's initials, CBJ, with an electric green hockey stick cutting through the center to represent the "J." The 13 stars represent each of the original 13 U.S. colonies and signify patriotism. The star on top of the stick signifies Columbus as the state capital of Ohio.

The jersey will presumably be joined by the blue pants Max Domi leaked on his Instagram earlier this month, the team's normal gloves and helmet, and the original socks with the same swap as the jersey (red for white, white for blue, and blue for red).

The new Reverse Retro jersey will be worn "multiple games against each other in designated rivalry games during the upcoming season" according to nhl.com. I'm guessing twice, once at home, and once on the road. I think the fact that they'll be worn against each other is one of the coolest things about the Reverse Retro series, plus it means that a color-on-color matchup is not only possible, but likely. Among the Blue Jackets' biggest rivals, only the Pittsburgh Penguins, Detroit Red Wings, and Buffalo Sabres have a white Reverse Retro jersey. In fact, only eight of the 31 jerseys League-wide are white.

Now, as the Cannon's local graphic design guru, I thought I'd give some of my thoughts on this jersey. If you've read some of my other FanPosts and comments (mostly in reply to a certain Eric), you might already have an idea of where I'm going with this.

This jersey is not only far from good, it was also far from the best option available. Even from this inaugural set.

My biggest gripe with this jersey is the base color. Red is a great jersey color - it's aggressive, looks sharp, goes with almost anything - but for a team called the Columbus BLUE Jackets, it's a poor choice. When your branding is centered on that color, that color should be the primary color on every non-white jersey in your uniform history. That's how the Red Wings, Blues, Cincinnati Reds, Ottawa Redblacks, and more have done it, and for a reason - it promotes consistency within the brand, it allows for instant recognition among newcomers, and it just freaking makes sense.

But, okay, say you want to have red as the base. Your loss, but that's the commitment you've made. Then Blue MUST be the secondary color and used heavily in the striping. This is not the case here. Blue takes a backseat here as an accent color, allowing white to take priority. As a result, this ends up looking more like a Washington Capitals jersey than a Columbus Blue Jackets jersey. It breaks the branding, as the look that the team has spent two decades building has been thrown completely out the window. Instead of a blue jersey with questionable little striping or a white jersey with a blue full-length yoke, we get red and white. You simply cannot have Blue as an accent in a jersey for a team called the BLUE Jackets.

In addition, the striping pattern on this jersey is not good. The hem's fine, but the full-length shoulder yoke is questionable at best. With no trim or curves to freshen it up, or striping to interrupt it, we're left with a plain, straight, white yoke going across the top from cuff to cuff. It looked dated when the Maple Leafs first used it in the 1970s, it looked dated when the Blue Jackets first played in it, and it looks dated now. It also dominates the jersey, as the more bigger and bolder of the jersey's three major elements (yoke, hem, logo). It's not a good feature.

Now, I will admit that it looks better than I thought it would. Especially how the logo plays off the red. But it still neither fits the team branding, nor improves the jersey over the original

So what would I have done instead? The most obvious option is to just keep this design, but swap the red and blue. You could also go with a Barons, Checkers, or Chill throwback. Or a road version of the alternate, either with its colors or the primary jersey's colors. I've been meaning to mockup those options, but school work has really been eating into my time. So for now, I'll just give this TLDR:

The Columbus Blue Jackets Reverse Retro jersey is a disappointing missed opportunity, that breaks the branding of the team, and isn't even that good of a jersey anyways. Sorry Swifty, but this jersey is actually bad.