The Columbus Blue Jackets have unveiled their 20th Anniversary logo on Monday, after rumors predicting so began circling over the weekend. 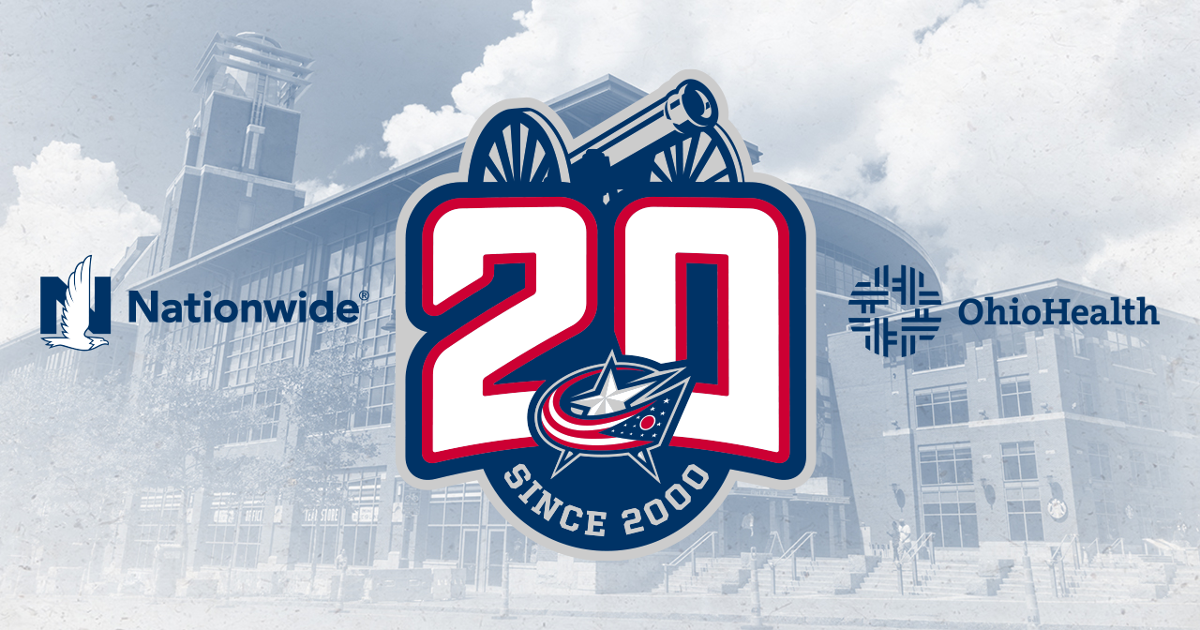 From the team's official press release, which can be found here:

The logo features a large number 20 that is white with red trim, outlined in blue and silver. Overlaying the bottom of the 20 is the club's primary logo, which is inspired by the state flag of Ohio with its pennant shape, red, white & blue colors and white stars in the shape of the letter C wrapped around the Blue Jackets star. The top of the logo features the club's signature 1857 Napoleon cannon that has become synonymous with Blue Jackets hockey since its introduction in 2010, while the bottom includes the phrase "SINCE 2000" in silver over a blue background with a silver border.

Team players will wear a patch featuring the commemorative logo on the upper right chest of home and road jerseys throughout the 2020-21 NHL season. A version of the 20th season logo patch in the color scheme of the club's third jersey will also be worn during designated Third Jersey Nights. Special 20th season merchandise including shirts, pucks, pins, polo shirts and patches are on sale now.

Interestingly, there appears to be an alternate version with the Alternate's colors on the way. Using the power of Photoshop, here's my mockup of that: 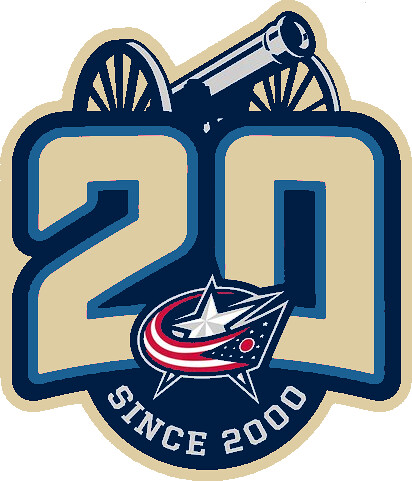 And here's some very quick mockups of how the logo will look on the jerseys: 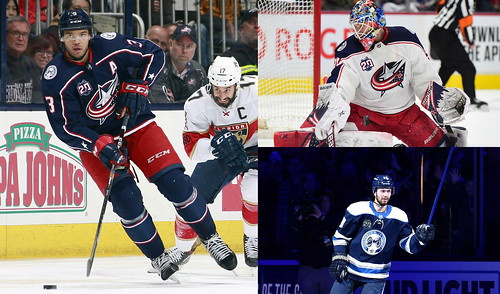 Now let's get into the breakdown!

The most interesting thing to note, at least for me, is the new font for the 20 and Since 2000 text, and it's interaction with the Primary logo. Let's talk about the latter first, as it's the thing I've seen this logo get the most flack for on social media. The main argument I've heard is that the logo's outline is too thicc, and the bottom corner of the 0 interacts with the double-point of the star and flag weird. I'm not entirely convinced on that. The logo is going to be used as a small patch primarily, so thinner outlines would cause the numbers to bleed over the logo. Look at my mockups earlier. The logo stand out, but just barely. Any thinner and it'd bleed.

Now the new font. Considering that the Blue Jackets have some of the most interesting fonts in NHL history, to see none of them being used here is kind of a letdown. It's not a bad font, but it also doesn't have much personality, and looks pretty similar to the Winnipeg Jets font. The only thing unique to it is the bottom arch. Speaking of which...

The Shape of You 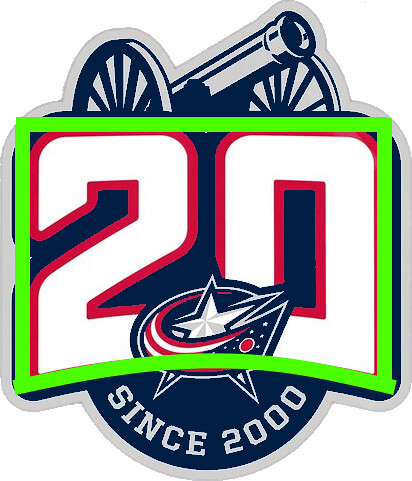 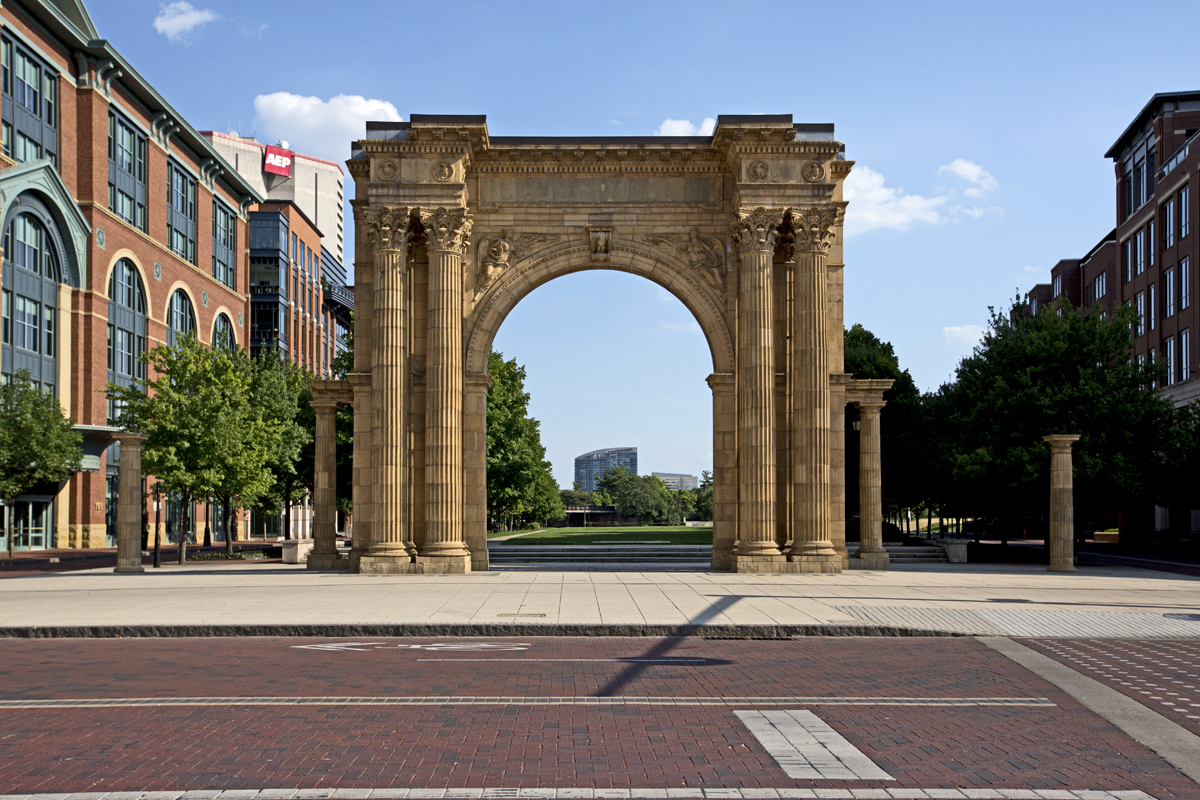 I mean, it's a stretch, but it seems like it you could at least mention it in the promo. The other thing with the text is the reverse-arch for the "Since 2000." It's a bit to steep for me. Reverse arches are something you need to be careful with, as they can look very unnatural very quickly. And that "Since 2000" looks wack.

Another missed opportunity comes in the general shape of the logo. Again, look familiar? 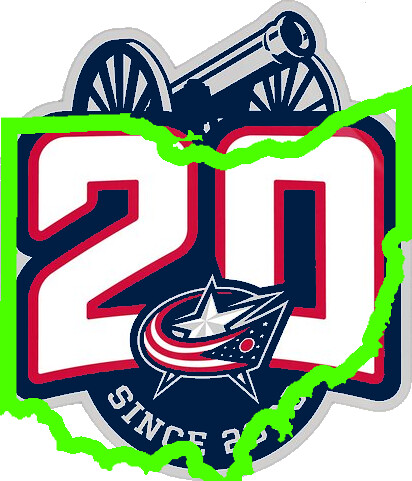 Again, a stretch. But it seems like a missed opportunity. And it doesn't have to be the jagged mess of the actual state logo, a simplified and modern adaptation would also work. Again, this is the type of subtle imagery that'd put this logo to the next level.

Now, one unanswered question is how the new logo fits in with the existing logos. Let's check it out: 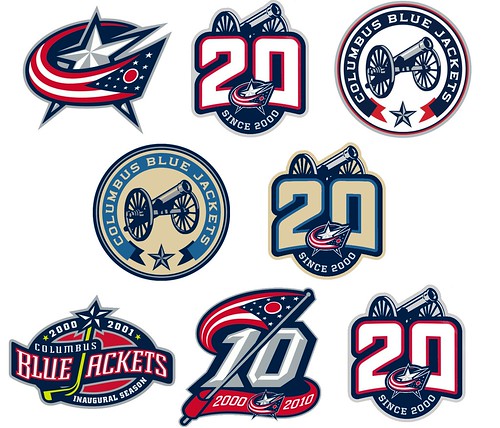 This logo, when you look at it, comes off like a combination of the two logos. And it doesn't work. The Primary logo is angular, sleek, and modern. The Alternate logo is a roundel, classic looking, and formulaic. And combining these qualities doesn't work. The anniversary logo is formulaic and classic like the Alt, but modern like the Main. And combining those two identities doesn't work. Look at the 10th Anniversary logo: it embraces the primary logo's elements fully. The Inaugural Season focuses on the Wordmark and Shoulder Patch. Having your focus on one element, with maybe some incorporation of others, should be the focus. Combining two distinct brands does not work.

Thing is, this logo works within the brand. Just slapping the two logos together in the template guarantees it, it's just boring and predictable.

And that's the main problem for this logo to me. It's boring. It's predictable. I probably could've made it in Photoshop in a day. It's fundamentally sound, but it doesn't do anything or go anywhere.

One of the greatest factors in how good a logo is it's symbolism, and this has none. It's a 20, and the founding date. It has the logo, and the Cannon. It puts them together, and that's it. There is no subtlety. It's just there.

I mean, it works, but it's hard for me to get excited about it beyond any straight up analysis. I mean, look at this article. A good portion of it was me trying to add some symbolism to the the logo. So that's my main takeaway. I'm glad they revealed SOMETHING, but it's underwhelming.