This year's Cannonfest featured a new venue, some new twists, and one big surprise. Despite the rain and the heat, fans turned out in style, and a great time was had by all.

I am always nervous about Cannonfest. After working to plan, even after the last few years, there's this fear of "will it work out?"

In particular, this year, we had a lot of moving parts. A new location, the addition of food trucks, the attempts to expand that were hampered by the weather, and a lot of behind the scenes logistics.

I was a bit of a nervous wreck from 11:00am - 1:00pm, but the moment that Mike Todd got on stage and said "Welcome to Cannonfest!", and the crowd responded with a cheer, I knew it was going to be OK.

The folks at Strongwater pulled out all the stops helping get things set up, and though the rain prevented us from setting up the patio / beer garden we had originally planned, we were still able to fit everyone in comfortably, including the raffles from the Jacket Backers, the art of Ashley Ware, the CBJ Artillery, and a massive memorabilia display organized by John Wooten and a group of fellow jersey collectors and fans, including the never before seen in public 1998 prototype jersey. (Which, for the record, I really dig the chevrons on. I know exactly why it never happened, but still, neat.)

Speaking of those food trucks, you guys seem to have liked them! In fact, you hit OH! Burgers so hard that they sold out of food an hour early! Plenty of fans also enjoyed Ajumama (and their Power Play brat sandwich) and Cilantro as well, and I'm excited to say that the trucks also donated a portion of their proceeds to the day's fundraising for the CBJ Foundation. 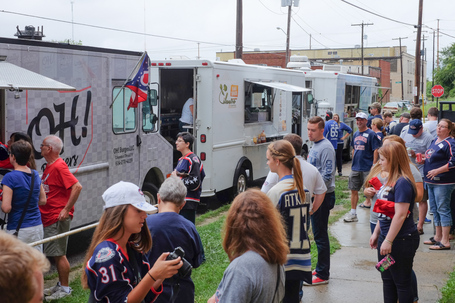 We were not able to show a video by fan favorite Tom Larrow (AKA Skraut) this year, due to real life commitments, and sadly Tom could not attend to an injury he suffered preparing to run in the Cleveland Marathon. He was missed, but perhaps we saw the torch passed, as Shane Gulifoyle came out of the blue to offer us three awesome videos highlighting the 2013-2014 season, including the playoffs.

But the really big surprise, one that we worked to keep under wraps until the moment it happened, was the appearance of Alexander Wennberg, who was good enough to come in and spend a little time with us. The future seems to be pretty bright for this team, and it's clear that Wennberg is as excited as the fans, planning to come into camp and make the best case he can for a roster spot on opening night. 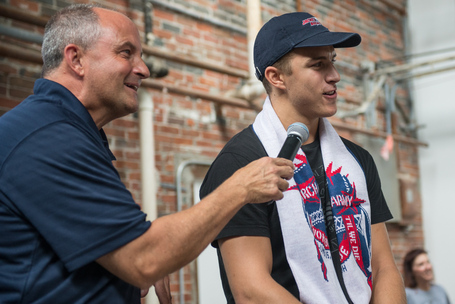 It was an amazing afternoon, and I am so grateful and glad to have been a part of it. A lot of people give me credit for creating Cannonfest, or having the "vision" to keep it going, but this isn't really true. Cannonfest is part of our community. It grows, thrives, and continues because of the love, passion, and commitment of every fan who takes part, from the people helping to put it on to the fans who attend. Without all of you, and your support, this never would have made it one year, let alone five.

Cannonfest is it's people. I am so proud that you include me in that number.

Here's to a fantastic event, a great afternoon, and to the season to come.