Way Down on the Farm: Coaching Change Leaves ECHL Affiliation in Limbo

The Evansville IceMen have fired their coach after another season without playoffs, leaving Columbus' ECHL affiliation temporarily in limbo.

Share All sharing options for: Way Down on the Farm: Coaching Change Leaves ECHL Affiliation in Limbo

In 2012 when the Evansville IceMen jumped off of the Central Hockey League's sinking ship and joined the ECHL, the transition to affiliated hockey carried a steep learning curve. Head Coach and General Manager Rich Kromm elected to sign a pair of one-year affiliation deals, inking contracts with both the Columbus Blue Jackets and St. Louis Blues. The IceMen dressed an incredible 59 different players and lost 425 man-games to injury in 2012-13, en route to a 25-40-7 finish and a home in the cellar of the ECHL's Eastern Conference.

Kromm's contract was not renewed, and longtime ECHL coach Jeff Pyle was hired as Evansville's new Head Coach and Director of Hockey Operations. Pyle chose to scale back on the affiliation front, walking away from the Blues but retaining the Blue Jackets relationship. The IceMen roster stabilized a bit in 2013-14, with Evansville dressing "only" 46 players and losing "just" 264 man-games to injury. Still, the team finished on the outside looking in at the playoffs again, with a 31-30-11 record and a 10th-place ranking in the 13-team Eastern Conference.

It was just the second winning season in Evansville's brief six-year hockey history, but not enough to earn Pyle another season behind the IceMen bench. Coupled with the team's late-season meltdown (the IceMen started 21-9-8 but went just 10-21-3 after that), Pyle's off-ice differences of opinion with IceMen Owner Ron Geary sealed his fate. Geary announced Pyle's dismissal on April 18, citing a commitment to winning and admitting that Pyle simply wasn't "a good fit."

Last off-season, Pyle's hiring was announced in conjunction with Kromm's firing, on April 11. This year, Pyle's departure did not coincide with his replacement's hiring. Geary has stated that the coaching search is well underway, numerous applicants are under consideration, and a decision should be made by June 1.

In the meantime, fans are left to wonder what will come of the agreement between Evansville and Columbus. Other ECHL teams are already locking up affiliations for 2014-15 and beyond - the expansion Indy Fuel have signed a 5-year deal with the Chicago Blackhawks, and the Elmira Jackals have announced an affilation switch from the New Jersey Devils to the Buffalo Sabres.

Last summer, the IceMen did not announce the renewal of the Blue Jackets affiliation until July 16, more than 3 months after Pyle was hired. It stands to reason that no decision will be made this summer until the IceMen have found Pyle's successor and the new hire has time to settle in and assess the situation, so it will likely be a while until we find out if the IceMen and Blue Jackets will continue to work together.

When the 2013-14 affiliation renewal was announced, Pyle confirmed that the Blue Jackets had been interested in a multi-year agreement. Pyle elected to sign a one-year deal, however, preferring to take a "wait and see" approach to subsequent seasons. He wanted to make sure that the relationship was "mutually beneficial" before inking a long-term deal. Of course, what Pyle didn't foresee was that his tenure in Evansville would not outlast the affiliation agreement.

So now, as the IceMen look for their third coach in as many ECHL seasons and the team's affiliation situation remains in limbo as a result, let's take a look at the Evansville/Columbus player development relationship from the IceMen perspective... 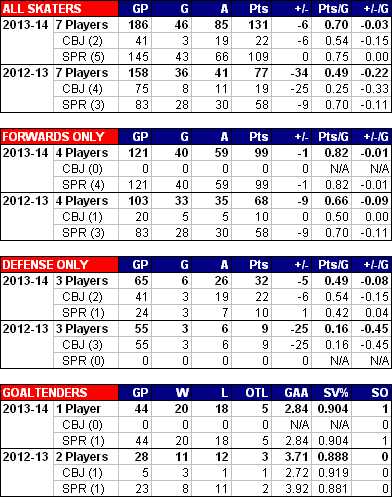 • A total of 8 different affiliate players wore the IceMen uniform in 2013-14, down from 9 Columbus/Springfield send-downs the previous season. Only 2 of the 8 were Jackets prospects, with the other half-dozen under AHL contract with the Falcons. (In 2012-13, 5 of the 9 were Columbus property.) But although the affiliate assignments were more of the AHL variety this time around, Evansville's affiliate player performance actually improved across the board - more total games played, increased offensive output, better plus/minus, and more reliable goaltending.

• Rookie defenseman Thomas Larkin started and ended the season with the IceMen, but in-between had 3 separate stints (totalling 19 games) in Springfield as well. Larkin finished with 20 points and a +2 rating (not to mention 4 fights) in 33 games with Evansville, always logging big minutes as part of the team's top defensive pairing at even-strength and on the penalty-kill. Second-year blueliner Austin Madaisky was the only other Blue Jackets prospect to spend time in Evansville, registering 2 assists in 8 games (all on the road) during 2 stints with the IceMen. Larkin and Madaisky, who are both signed with Columbus through the 2014-15 season, should be in the mix for significant playing time in Springfield going forward.

• Second-year Springfield-contracted goaltender Mike Clemente spent most of the season in Evansville, with a pair of call-ups mixed in. Clemente beat out former Jackets netminder Allen York for Evansville's starting gig in training camp, started the season with a shutout against Kalamazoo on opening night, and earned ECHL Goaltender of the Week honors during the following week. Over the course of the season, his performance mirrored that of the IceMen in general - excellent until late January, and then the proverbial wheels fell off. Clemente went 13-2-4 with a 2.33/.914 stat line in his first 19 appearances, but was just 7-16-1 in his last 25 games with a 3.24/.898 line. Though, to be fair, Evansville's overall team defense during Clemente's statistical swoon typically alternated between mediocre and putrid.

• Falcons-owned rookie forward Alex Aleardi started the season in Springfield, amassing 16 points in 41 games before the Falcons reassigned him to Evansville in February. He remained with the IceMen until season's end, overcoming a slow start (3 points in his first 8 games) to become Evansville's most potent offensive player down the stretch. Aleardi racked up 20 points in his last 15 games - including his first professional hat trick on March 26. Aleardi is small at just 5'9" and 167 pounds, but certainly has the skill to put together a lengthy pro career - especially if he can improve his defensive game.

• Rookie winger Peter Sakaris signed an ECHL contract with the IceMen last summer, then got an invite to Springfield's training camp. He impressed the Falcons brass enough to earn himself an AHL contract, but was sent back to Evansville when the regular season began. Sakaris was never able to get back to the AHL, battling injury and inconsistency in Evansville. He missed 18 games due to a groin strain, and sat out 8 more as a healthy scratch. When in the IceMen lineup, Sakaris tallied 24 points and a +5 rating in 46 games. His best stretch was the 12-game span immediately before sustaining the groin injury, in which he had a pair of 2-goal games and totalled 10 points. Sakaris, also small (5'9" and 172) but speedy, does not possess the same raw talent as Aleardi but does play with a physical edge well beyond that of most players his size.

• Rookie forward Jeremy Langlois started the season in Springfield, first joined the IceMen in early November, got called back up to Springfield twice, and became Evansville's best all-around player before the Falcons dealt him to Bridgeport at the AHL trade deadline. Langlois led the IceMen with 52 points in 49 games, and spent 16 games as interim captain (a rarity for a first-year player) while Josh Beaulieu was on the shelf with a broken foot. He finished the season as the ECHL's top-scoring rookie, and wound up third in ECHL Rookie of the Year voting. Langlois was traded for defenseman Dallas Jackson, as the Falcons attempted to shore up their blueline. Jackson spent the season's final month in Springfield, appearing in only 4 games and never dressing during the team's first-round playoff exit.

• Langlois was not the only player who played for Evansville this season before being traded by Springfield. Veteran AHL forward Tim Miller played 3 games for the IceMen, and was dealt to San Antonio on February 7. On that same day, third-year defenseman Joe Lavin was traded to Providence after having spent the entire season in Evansville. Lavin had joined Larkin on the top defensive pairing for the IceMen, chipping in 10 points in 24 games when not dealing with injuries (a sports hernia that required surgery and later a broken thumb). In his first 2 pro seasons, Lavin had exclusively played in the AHL and had proven himself at that level - so now in retrospect, IceMen fans are understandably confused about Springfield's decision to trade Lavin for future considerations, only to deal a talented prospect like Langlois a mere month later in order to add depth on defense.

IS THE FEELING MUTUAL?

So was the Columbus/Springfield affiliation "mutually beneficial" during the 2013-14 season, from Evansville's perspective?

For the sake of argument, let's exclude Sakaris from this discussion. He would have been in Evansville even without having signed an AHL deal with the Falcons, so it's not prudent to count his contributions as having been the result of the affiliation agreement.

Langlois and Aleardi were perhaps Evansville's most dynamic offensive players, 2 of the team's 3 players who averaged at least a point per game.

Larkin and Lavin were the best defensive pair Pyle ever had at his disposal, and some IceMen fans are convinced that Larkin will eventually become the first player to make his NHL debut after cutting his teeth in Evansville.

Madaisky and Miller weren't really around long enough to make an impact, but IceMen fans know from Madaisky's time in Evansville during the 2012-13 season that he has tremendous potential as an offensive defenseman.

Clemente proved over the first half of the season that he can steal games and almost always make the saves he's supposed to make, as long as the team is playing relatively well in front of him.

The Lavin and Langlois trades, when considered in context together, were indeed quite a head-scratcher. Those moves certainly did not benefit Evansville - but it's not a big stretch to suggest that Springfield didn't really gain much either.

Those "mutually detrimental" deals aside, the IceMen did benefit quite a bit from the affiliation - two very good forwards, two very good defensemen, and a solid goaltender. None of those players spent the entire season in Evansville, but that's life at the bottom of the food chain. Enjoy assigned players while you can, because you never know when they'll be gone.

So yes, it's probably fair to say that the IceMen did, for the most part at least, enjoy a "mutually beneficial" relationship with Columbus and Springfield. But with Pyle gone in Evansville and his replacement yet to be determined, there's no telling how much that will mean with regard to the affiliation's potential future.

Much like players in the ECHL, this story is still developing!