Dividends are being paid on the partnership between the Columbus Blue Jackets and the Springfield Falcons. Matt Calvert's two goal performance in Game Two versus Pittsburgh notwithstanding, the Jackets' roster featured five other skaters who have played for the Jackets' top affiliate.

Cam Atkinson, Boone Jenner, Ryan Johansen, David Savard and Jack Skille all contributed to the Falcons success before translating that to success at the NHL level.

Springfield fans saws the fruits of the affiliation last season when the Birds earned the Northeast Division championship.

The work ethic of the Jackets system paid off once again this season, as the Falcons chalked up a franchise record 47 regular season wins and 100 points, in capturing their second consecutive Northeast Division title.

The biggest blemish on the Birds' season, one that prevented best in the league status, was a five week run from late January until the first week of March. Over the course of those 18 games, Springfield struggled with 6 wins and 12 losses.

The roster saw something of a reset during the annual trade deadline frenzy. Gone were Spencer Machacek, Blake Parlett, Dalton Smith and Jonathan Marchessault. New to the roster were Paul Thompson, Carter Camper, Matt Taormina and Dana Tyrell.

Along with some other retooling, the Falcons proceeded to go on a 13-3 tear, before dropping a pair to close out the regular season.

The losses this past weekend came long after the Birds claimed their spot in the post season. Reportedly, much of the ice time in Hartford and in Albany was to allow the coaching staff the opportunity to make their final tweaks to the playoff roster.

Calder Cup Playoffs - Eastern Conference Quarterfinals
The best of five series opens up this Wednesday night. Springfield has home ice advantage, although the series opens in Providence. Games two and three will be at The Nest this coming Friday and Saturday.

The regular season series between the two clubs saw the Birds come away with a 6-2-0-2 advantage. The only game that was played after the trade deadline was a 4-2 Falcons win on March 15th.

Rookies Alexander Khokhlachev and Seth Griffin were 1-2 up front for the P-Bruins this season. David Warsofsky leads the D corps, with perpetual tough guy Bobby Robins (221 PIM) both ready to keep the play physical.

Between the pipes, the tandem of Niklas Svedberg and Malcolm Subban (PK's brother) will do their best to keep the Falcons off the board. Svedberg played 12 more games than Subban along the way.

Why the Falcons can win
The Falcons success over the past couple of seasons starts at the top. The culture of winning is not a novelty here, but is expected as a factor of the hard work that is put in night in and night out. 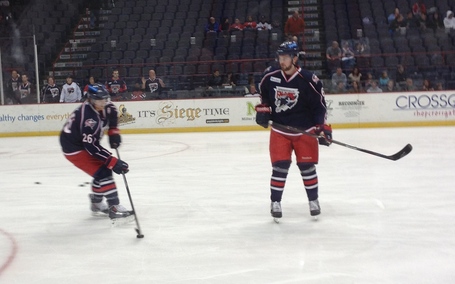 Chris MacFarland and Bruce Landon have done a great job in fine tuning the roster. The coaching staff of Brad Larsen, Nolan Pratt and Jared Bednar make sure that the Birds play an up tempo style of Jackets hockey.

Chaput continues his development right on schedule. He has become a smart hockey player in addition to becoming a reliable playmaker. Collins has also shown the speed and the ability to be in the right place at the right time, a factor which has led to his playing time in Columbus.

Mentioned earlier, Carter Camper is another playmaker on the roster. In his 19 games for Springfield, he has tallied 4 goals and 16 assists.

The leadership and the character of this squad cannot be emphasized enough. Captain Ryan Craig seems to do everything right, both on the ice and off. Alternate captains Andrew Joudrey and Cody Bass bring experience and a burning desire for success every night.

Not to be overlooked in either the playmaker or leadership department is Tim Erixon. Watching most of the games over the past three weeks, Erixon has become somewhat of a general on the blueline. Calling out open men to his mates, making key passes and still maintaining a defensive presence, Tim has looked really good down the stretch.

Mike McKenna has done well for the club this season. One year removed from Curtis McElhinney breaking every Springfield goaltending record, fans may have shown some concern when McKenna and Jeremy Smith became the last line of defense for the Birds. Both did well for the most part. With Smith recalled to Columbus, Anton Forsberg has stepped in and performed at a level that shouldn't surprise anyone.

Other key contributors for the Falcons this season have been Darryl Boyce, Jean-Francois Jacques and Jake Hansen at forward. On defense, Patrick McNeill, Frederic St. Denis and Cody Goloubef have all played an important part in Springfield's success.

Dana Tyrell (LW) and Matt Taormina (D) came over from Syracuse in the Marchessault/Smith trade. Both have played well for the Falcons.

On paper, one would think the Falcons should take the series. As we all know, that's why the games are played on the ice and not on paper or a PlayStation. Three of ten games went to overtime and eventually a shootout during the regular season. I expect an exciting, physical series between these two longtime rivals.