A goaltender who has quietly improved his game as the backup to one of the WHL's top clubs, Tristan Jarry is likely to go early in the second round, and could be an option for the Blue Jackets to expand their goaltending depth.

Even though Tristan Jarry appears to have a lot of talent, he's a difficult player to judge. Drafted by the Oil Kings, he's spent the last two years as the understudy to Calgary prospect Laurent Brossoit, one of the best goalies in the Dub over the past two seasons. When Jarry's had the opportunity to come in as the backup, he's played well, and also had a strong performance at the CHL top prospects game earlier this year. The issue is simply a small sample size. Is he really as good as he seems? Or is he good because he's been getting limited minutes with a lot of stellar talent in front of him to make his job easier?

The proof will come next year, with Brossoit expected to go pro and Jarry to take over the Oil Kings' net full time, but that's not soon enough for a GM who has to decide if he's willing to take a shot on the BC native.

Jarry is ranked #3 among North American goalies by NHL Central Scouting, and there's no question he has potential - but the jury is still out on if that potential can translate to performance.

Jarry plays a very athletic, butterfly style. His technique is good and he gets in and out of the butterfly very quickly and does not leave large gaps between his legs or between his arms and body. Jarry has quick legs throwing out his pads to take away the bottom of the net. His glove hand is excellent and takes away the top corners. He moves around the crease well, with good puck tracking and the ability to go post to post with ease. His backwards skating is also solid which should allow him to challenge shooters off the rush. While having solid technique, Jarry is also very instinctive and more than just a "puck blocker" as he has great reflexes and can make the odd diving save that wouldn't expect him to be able to get to.

You can never get enough goaltending, and even though the Jackets have some promising players in the pipeline, they continue to make increasing their depth a priority. Even with promising talent in the form of Anton Forsberg and Oscar Dansk, there are question marks around the long term future for Joonas Korpisalo. If the club thinks that their 2012 3rd round pick is going to stay in Europe, taking a swing on Jarry could work out nicely to give the club a good North American prospect who will have the opportunity to build up his game over the next two seasons. 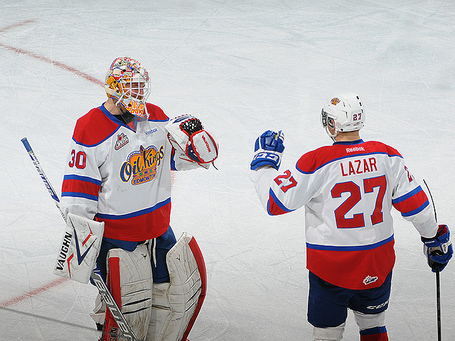