What started as a twitter joke by the LA Kings has turned into an identity for the Blue Jackets and their fanbase as the team continues their violent assault on the standings. It's become a shorthand for a huge mix of emotions - so perhaps it's a good time to talk about just what it is. 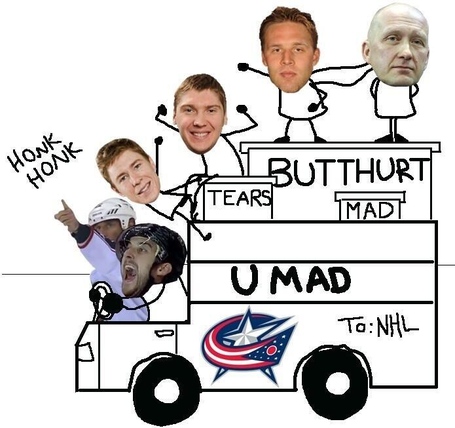 If you look in the dictionary for "Lumbus", it's a bit disappointing. (For the record? Lum - Bus (noun): Either side of the backbone between the hipbone and the ribs in humans as well as quadrupeds)

Urban Dictionary, on the other hand, is a little more on point:

An abbreviated, corrected and official new name for the NHL hockey team that plays in Columbus, Ohio. Prior to the correction, they were known as the "Columbus Blue Jackets." (Or something like that)

Originally abbreviated by the LA Kings via Twitter, "Lumbus" has thrived with the new, improved moniker.

Let's talk about that last bit - what has become a rallying cry for the Columbus fanbase...is a label hung on the club as a not entirely kind joke by another club.

The first time I caught it, it was when the LA Kings were retweeting some of the Black Tie, Blue Jackets photos with it and the nickname felt inappropriate to the situation - on the edge of mocking the point of the event, which is to help kinds in need.

But as the year has gone on, and the club gathered steam, it's changed. The community has grabbed hold of the label, and taken ownership. What started as a jab is now a badge of honor. It ties into the gritty effort that we're seeing, the insane goaltending, and the Roster Viking moves that made the entire NHL stop and take notice of what has been coming together at 200 West Nationwide Boulevard.

It's a team that is having fun playing for each other, the fans enjoying the ride, and maybe understanding that you can love the club without having to take them entirely seriously.

The more it's bandied about, the more you see fans using it - and not just in Columbus. Posts on Reddit, HF Boards, and twitter all over the country have started using the shorthand to talk about the team's success. Even some national hockey media are getting in on the meme.

Lumbus is the joy of the underdog.

Every time we talk about this Blue Jackets team, we keep saying "Even if it all falls apart, this has been an incredible ride." It's that spirit of "Holy crap, is this really happening?" that's carrying the idea through the NHL, as everyone watches and waits to see if the team nobody paid attention to can do what no one expected.

Get on the Lumbus. There's plenty of room.