Such is my life these past several months. Ville A asks questions on February 2nd. Another hectic week passes, all the while questions aging in my laptop. Interestingly enough, the questions have twisted and turned with some of the week's transactions. Holden and Goloubef go up. JAM goes up and returns. Then, surprising many, Johansen is sent back down. It was quite a week for all parties concerned. But now, on to Ville's questions!

Share All sharing options for: Q&A With Ville - Part 2

8PM update...David Savard has been sent back to Springfield.

Ville A: In Columbus we are very familiar with Cam, Calvert and Savard, but what can we expect to see from Erixon and JAM?

LB: IMO, Erixon is the real deal. Like most young players, his adaptation to the highest level of the pro game may take awhile. His season in Springfield showed excellent two way play, good puck sense, the ability to transition quickly. In other words, everything you'd want a D man to be. Now, with the Jackets already hurting on the blueline, and with Wiz getting banged up, there may be some more movement. I would suggest thinking about John Moore's development last season. When these high-ability guys are pressed into duty, more often than not, they take the baton and run with it. Expect the same from Erixon.

I can't say enough good things about JAM. He was a Falcons killer last season while playing for Connecticut. Unheralded at the time, I was glad to see the Jackets pick him up early in free agent signing season. My only concern is his size, and although most teams have at least some presence at 6'3" or larger, similarly some teams realize that what guys like JAM or Cam bring to the table is worth the size differential. Their speed and on ice ingenuity is off the charts valuable, and in the case of the Falcons, you've seen the production of Cam, JAM and although not as diminutive, but the same style player, Calvert.

(Note: JAM has since been re-assigned to Springfield. There is little doubt that he will be back in C-bus)

Ville A: I think that Goloubef is a very underrated prospect. How has he looked since returning from injury?

LB: Prior to his recall, Goloubef had become my favorite Falcon D-Man. I've liked his game since his first season in a Falcons sweater. He's the kind of underrated player that is a pleasure to watch play the game at this level. Also another thing that I have enjoyed immensely over the years, is to see somebody blossom as a pro.

Cody is blossoming right now. When with the Falcons, he takes to the ice with confidence. His mistakes are few and he is developing a dandy offensive touch. I will admit that I haven't seen the Jackets games this week with Cody in the lineup, but I suspect his style of play hasn't changed. He's in the final year of his entry level contract, so now is the time to show the front office what he's got.

Ville A: Who has stepped up in the absence of Atkinson, Johansen, Calvert, Savard, Erixon and JAM (wow, that’s a long list)?

LB: It is a long list. Especially vexing for a Springfield fan who hasn't seen a sniff of a championship in over 20 years, and the playoffs for nine, this was the big money lightning-round question. With those guys gone, now who?

To most people's surprise, Johansen has been sent back to the Falcons. This could be attributed to JD's "building for the future" mantra. Maybe I'm reaching by saying that, but to somebody on high in the Jackets front office, the demotion made sense. Obviously, I am excited to see him back.

For a close look at just how the recalls affected the Falcons, take a look at the following screencap: 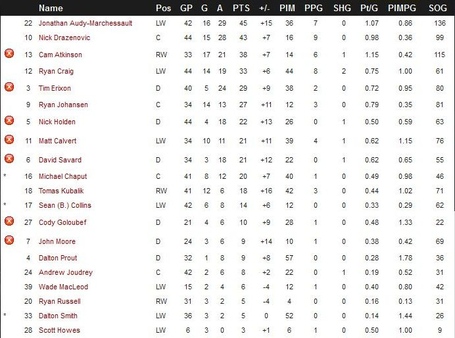 When you go beyond the names with the X's beside them (X's indicating "not currently on the roster"), you can tell guys like Drazenovic, Craig and Chaput have been in the mix. What's as important to me though, are the guys whose names don't appear on the scoresheet.

Joudrey, MacLeod, Russell along with rookie Dalton Smith and recent PTO signee, Scott Howes have all stepped up. Some with the occasional point, all with outstanding two way play.

Ville A: Are any of our current Springfield forwards like Kubalik, Drazenovic and Chaput talented enough to be NHL players and what do they bring to your club?

LB: Kubalik - Some nights you'd think he was the second coming of Evgeni Malkin. Then other nights, (this is a true story) I have asked "Why isn't Kubalik playing tonight?" only to be answered by, "He is playing tonight". Need I say more?

Drazenovic - Nick was heralded as a slick, playmaking center upon his arrival here last year. His season was limited to 41 games by injuries. He still put up 41 points in that time, his best pace ever. I like everything about Nick's game. He does it all. He does it right. He does it like a pro. Likely his biggest downside right now is his age. He just turned 26 and has only 3 NHL games under his belt at this point. With the Jackets sending Johan back to Springy, Draz would be a sensible choice next time there's a need for a center up top.

Chaput - I have been very excited by Chaput's play the first half of the season. Coming off an unbelievable Memorial Cup tournament where he was the leading scorer, MVP and Cup champion he has transitioned nicely to the pro game. He has shown poise beyond his 20 years of age. Statistically, he has 8 goals and 12 assists for 20 points in 41 games. The future is very bright for him. He's starting to look like a steal in the Tom Sestito trade.

Ville A: What do you think of the current goalie situation in Springfield? It seems to me that you are getting results no matter who is playing between the pipes.

LB: That's a great question. Especially when one thinks about the Jackets. I've always believed that there is a synergy between goaltending and defense. Looking at the big picture, both have to be locked in for a club to succeed. How many times have you seen a game, or a run of games, where either the goalie or the D came up short and as a result, games are lost?

So far, Curtis McElhinney, Allen York and Paul Dainton have all been great. The important thing to take away is that they have been as good as they have needed to be. Which, on many nights, they have not had to be Jonathan Quick good. By the same token, the confidence they have brought to the Falcons defensively has helped the defensemen play a little looser than they might have. And, with as many different D-men as they've had in front of them, that really attests to how the one position plays off the other.

With the defensive callups (5 of the starting 6 D are in Columbus right now), the reliability of the goaltending has added a Borg-like collectivism to the Springfield defense. The Falcons were probably happy to have the snowstorm postpone Friday night's game. The extra couple days of practice with some new and healing bodies should have them ready to play on Sunday afternoon.

Ville A: How is the Falcons’ system different than what we are seeing in C-bus? Is the main difference execution or do you see something else?

LB: I firmly believe that with each NHL team having its own AHL club, the NHL club dictates to the AHL club how they want that team to play. The relationship between Columbus and Springfield is no different. The Falcons are playing Blue Jackets designed hockey.

There may be conditioning and coaching differences. But the bottom line is that the Jackets have told Brad Larsen what they expect.

Regarding differences of perception between the clubs, at this point in time, and I don't think this will come as a surprise to anyone, the Blue Jackets currently don't have the depth to compete with some of the upper echelon teams in the NHL. A positive to take away though shows the Falcons having a successful season because the Jackets were able to put this team together. Success at the minor league level is the first step to success at the major league level. Maybe this isn't the year for playoff hockey in Columbus, but it is on the horizon.

My take is that the latest retooling of the Jackets, now influenced by John Davidson and Craig Patrick, will not create overnight success (witness the "Seismic" posts here at The Cannon) in Columbus. What it will create, is a stable, long term successful product on the ice. As players mature and develop, the Jackets have the potential to be a model for other clubs on how team building is done right.

Ville A: From a Springfield point of view, how much are you looking forward to this year’s deep draft and all of the picks we have?

LB: Truthfully, this has been such an enjoyable season so far, I haven't given much consideration to anything other than the default number one pick in Nathan MacKinnon.

I read in The Hockey News that they didn't feel there was a lot of depth beyond say, the top 10 picks. If that's the case, perhaps the Jackets can put together a package of players/picks that could move up the timetable for winning hockey in C-bus. The past couple of drafts have added some impressive pieces to the puzzle. The only thing that can't be rushed is the time needed for some of these young men to develop.

Also, in addition to Cody G's deal expiring, so are the deals of others. Savard comes to mind right off the bat. These are more decisions that need to be made. As in, have these guys developed at the pace that Howson felt they should?

It might not be a fair comparison, but some of these guys will be judged by the lack of success the Jackets have experienced. So for other up and comers (Erixon is a good example), this is a great time to show your stuff on the big stage.

Thanks for the questions Ville! I'm already looking forward to Volume III!