After Blue Jackets beat writer Aaron Portzline went on a long twitter rant following last night's loss, it's worth considering where the club is at. 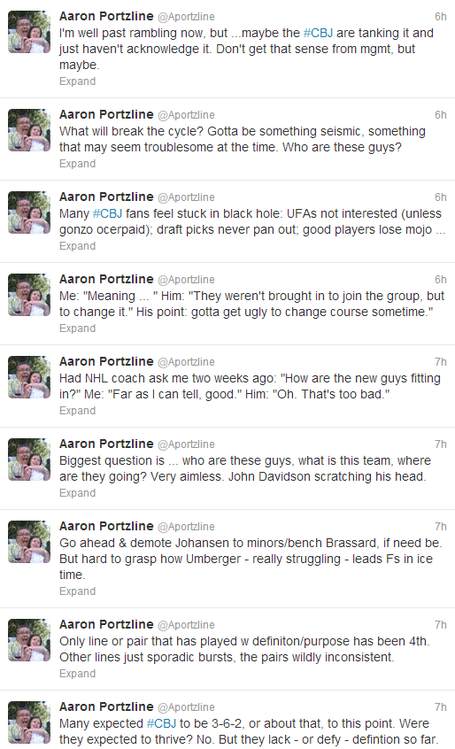 Well, thanks for telling us how you really feel.

If you're like most Blue Jackets fans, you probably gave a shrug after last night's OT loss, drove home or flipped channels (anyone else think Sheldon got a HUGE break on Top Chef?), and probably eventually headed for a good night's sleep.

On the other hand, you may have logged onto Twitter, and watched Aaron Portzline ...well, erupt isn't quite the right term. Eruptions imply a force or violence to the event. This was more of a seep, perhaps.

By his own admission, Porty is rambling. He's trying to come to grips with this thing that is Columbus, and it's not an easy task.

In a strange coincidence, I was mulling over a few things, and was planning to write today about them, so let's see where we can get if we go down the Black Hole.

Are We Who We Thought We Were?

At the eleven game mark of an 82 game season, you'd look at a team and think you'd have an idea of what they can be, but there's always room for change. (Remember that in Scott Arniel's first season behind the bench, this club was at the top of the Western Conference after 11 games. How'd that work out?) It's generally still considered a feeling out period, and there's a reason most teams aren't completely "locked in" until much closer to the 20-25 game mark.

The problem with a 48 game season, particularly with a telescoped schedule, is that we're basically at the quarter pole, but the club still doesn't really have a firm handle on their identity. Even without injuries, this team was turning over more than a third of the roster. When injuries are factored in, we're closer to half at this point, and while many of the defensive pairings have some familiarity, the forward lines had a near total lack of chemistry that has become more and more obvious.

Things are not helped by players like R.J. Umberger, Brandon Dubinsky, and Ryan Johansen going through scoring slumps. Things are not helped by Cam Atkinson being injured or Vinny Prospal showing his age some nights. But there have been signs of some improvements: Passes are getting better. Shots are being taken. Guys are starting to know where their linemate will be. It's not as good as we want it to be, but you can see improvements gradually developing.

When John Davidson came in, he promised fans that they will get a team that works hard for 60 minutes every night. We're not there yet, but you can see flashes of it. Not surprisingly, some guys have adapted faster than others. Mark Letestu has been one of the best players this season for the club, and he's earning more ice time as a result.

The defense, even when tied into a massive patchwork quilt, has been doing OK. Not setting the world on fire, but there have been some solid efforts amid the frustrations.

Sergei Bobrovsky has had one really bad game, three really good games (one of which was lost in the shootout), and a couple of games where he was OK but unable to steal a win. Steve Mason has put up two good games and three that ranged from mediocre to terribad.

Tell me again where this team isn't what we expected?

Yes, I hoped, like many, that they might come together and find chemistry quickly, and use that to surprise some opponents. But we knew this was going to be a work in progress. At this point, the team is batting .360. Maybe, if things had gone a little differently (looking at you, phantom interference calls), they might actually be about .500 instead.

That doesn't honestly strike me as tanking.

You want tanking? Go take a look at the Washington Capitals. That's a club that has been crushed under the weight of their expectations, and despite pulling two major coaching switches in the last two seasons, the wheels are clearly coming apart. With just two wins and one OT victory, they're pretty clearly headed for a black hole, particularly since Alex Ovechkin, the guy they've built around, is increasingly ineffective. Players don't want to be there, and most of them are starting to duck post-game interviews. It's a very, very messy situation.

Don't mistake this for false optimism - I don't see the Jackets magically rebounding and tearing into the playoffs. In fact, while it would be good for the immediate fans, that would probably be one of the worst long term effects. As has been mentioned again and again, this club needs a talent injection up front, and we have a VERY deep draft class ahead. Getting a lottery pick with at least one, if not two of their first rounders (notice that LA is not making much headway this season either, and who knows what is going on in New York), would be a major step towards fixing the problem. A slate of mid to late round picks wouldn't hurt, but being able to snag a blue chip player (or two) is exactly what this club needs.

(In a way, the worst possible thing that could have happened to Scott Howson in his tenure as GM was making the playoffs so early in his tenure. Not only did it start to load a lot of expectations onto the team that were difficult to answer, but it badly handicapped him in the draft. Suddenly he was expected to get the club back to the postseason, when he really needed more opportunities to seed the ground with better prospects.)

It's also worth considering that the same guys that Portzline is claiming aren't doing enough to change the culture are dealing with some pretty major culture shocks of their own. Guys who are transitioning to a new city, a new conference, a new team (and still making mental adjustments from getting back to the NHL after spending time in other leagues during the lockout) are going to need some time to get their feet down before moving heaven and earth.

Brandon Dubinsky hasn't been afraid to call out the team's issues with sustained effort. Bob seems to be content to push by example, and by all indications people are paying attention to his work ethic and following suit.

I'm not going to say there aren't still issues - the problematic situation with Umby is a pretty major one that I don't see a good solution to right now, barring a trade or potentially targeting him for a compliance buyout if he doesn't get his ass in gear, but there are reason to think that things are moving forward.

The Nash trade was a seismic event. But if we're going with that analogy, earthquakes don't magically get fixed overnight. You rebuild. Sometimes painstakingly slowly. You deal with aftershocks. You see problems exposed that may have been concealed in the past. You clear the debris. You fix your foundation. Then you rebuild.

John Davidson may decide there's more demolition work to be done. He may review the ground and try filling some holes back in. Or he may decide that he's satisfied with the recovery to this point, and start building something that will withstand abuse from a future 'seismic event', and give the fans what they've waited patiently for.