OhioHealth has provided us with four tickets to give away to their #GiveEmHealth Tweetup and the March 7th game against Vancouver. But, you've gotta give to get!

As part of that night, they're hosting a pre-game reception at the Nationwide Arena Founders Club as well as their #GiveEmHealth TweetUp. OhioHealth's Dr. Dapore, a team physician for the Blue Jackets, along with other sports medicine experts, will be on-hand to answer all of our hockey health related questions, including questions about concussions. There will also be complimentary hors d’oeuvres and beverages.

I'll be there; and now you and three of your bestest pals can be, too! The contest winner will receive four tickets to the game as well as four passes to the Founders Club reception and #GiveEmHealth Tweetup.

But, it's not just as simple as saying, "Hey, Cannon guys! I want to go!" You've gotta give us some details. We want to hear the story of your most memorable sports injury. We'll select the winner at random from all stories shared in the comments here by March 3rd (Sunday).

We're selecting the winner at random, so we're asking you to stick to the honor system and not embellish/make up a story. We're not going to pick the "best" or "craziest" story, so let's just stick to the facts, please.

Back in May of 2011, my wife was two months pregnant, and I--for some reason--was trying to learn to play hockey at the same time. I'd been skating since January, including an eight-lesson session at The Chiller. I could skate forward and stop, and sort of skate backward. My transitions were shit, I couldn't really use my outside edges, but just the same I thought it was time to graduate to the hockey classes the Chiller offers.

I made it through the first class just fine, though the skating drills exposed some weaknesses. You would think I would have dialed it back a bit, maybe realized I wasn't as good as I thought I was, and enjoyed the classes. But, nope. I'm super competitive. And I have unrealistic expectations for myself.

So it was that, during the second class session, I was doing a 50/50 offense-defense drill, and thought that--even though I couldn't really skate--I'd go all-out, and when the puck was tipped away from me, I HAD TO GET IT AT ALL COSTS.

I tried to turn to my right and reach behind me to get the puck back onto my stick. My edge caught in the ice. I fell for what seemed like forever, but because my edge was caught my leg went down but my foot stayed vertical. Something had to give. Turns out it was my ankle.

I felt a sharp, stabbing pain in my high-ankle. I was sure I had the dreaded high-ankle sprain, and as I drifted over to the bench on my good leg I thought, "No wonder pro athletes hate these so much." But, I thought I was fine. The class was almost over, and so I rode the rest of the lesson out on the bench. I drifted to the door, walked to the dressing room (limped, really), and changed out of my gear. I limped to my car, and drove home--ironically, right past the emergency room at Dublin Methodist.

My ankle was swollen to at least twice its normal size. I elevated it with ice for the rest of the night. The next day, I went to an urgent care center, all the while limping on my bad leg. The doctor there said, "It's probably just a bad sprain, but we should get an x-ray done to make sure." I went and had my x-ray done, and this is the moment I knew I was in trouble:

After the x-rays were done, the nurse came in and said the radiologist would be in shortly. I asked, "It's not broken, is it?" She said, "Let's wait for the radiologist." DEATH. 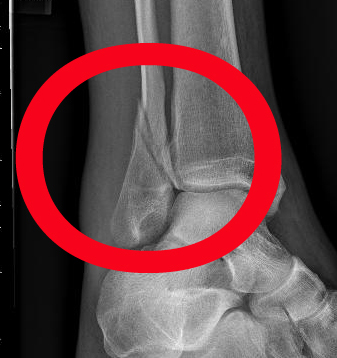 I circled the break. As you can see, a small piece of my fibula broke in two spots, and had moved out of position just enough to cause a problem. Most doctors will tell you that a simple fibular crack is treated with ice, a wrap, and maybe a walking boot. But, this break was juuuuuuust enough of an issue that two doctors recommended to me that I have surgery to fix it, since I was young enough (and wanted to be active enough). Basically, the doctor at Ohio State broke it down this way: "You're going to be in a cast for six weeks either way, so you might as well get it fixed right."

So, I had the bone reset, and a plate with six screws put into my ankle. It's still there today, and will be presumably for the rest of my life.

And all because I simply didn't know my limitations, forgot I was in my mid-30s, and figured I'd just pick up hockey like it was no thing.

I have nothing but positive things to say about my surgical experience. I got my cast off six weeks later on July 7th, and by September I was on the ice for the first time. I've played softball on my church team, and I played with no pain last summer. I play in the CAHL Monday E-league, and generally find a drop-in game once a week. I have no pain in my ankle. So, in the end, it wasn't all bad. I do, however, still have this: 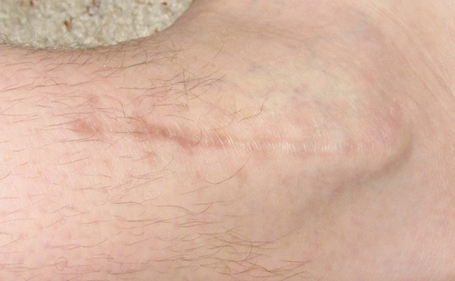 This is much better than it was, but you can see that I'll have a nice reminder for many more years.

So, there you go. Idiot guy thinks he's good at hockey, breaks his fibula, loses an entire summer.

And now, it's your turn!