It's being reported that Jarmo Kekalainen has been hired as the new GM of the Blue Jackets.

Share All sharing options for: Report: Jarmo Kekalainen Named GM of the Jackets

The speculation was rampant last night regarding who would take over as General Manager of the Blue Jackets, with Scott Howson being fired. One name started to dominate the conversation- Jarmo Kekalainen. Most of us woke up this morning and went directly to the one man who always has the answers, Bob McKenzie.

Here's what he had for us: 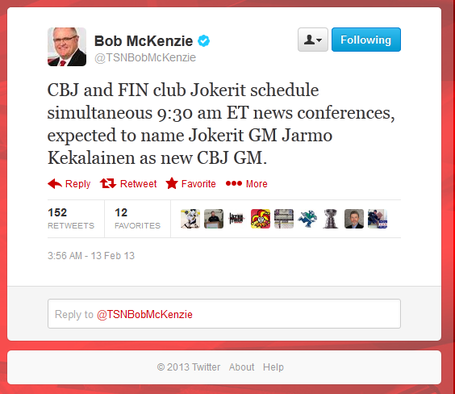 The move makes sense on so many levels.

The first and obvious point to look at is the fact that Kekalainen and team President of Hockey Operations John Davidson worked together previously with the St.Louis Blues. While with the Blues, Kekalainen was known as a draft guru, the guy to hand the keys to the bus to at the end of the season.

Not only is his draft record stellar, but he also has experience in the front office. After his playing days, which included NHL stops in Ottawa and Boston, he was General Manager of IFK Helsinki before taking the job as Director of Player Personnel with the Sens. In 2002, he was hired by the Blues as their assistant GM and Director of Amateur Scouting. This is where he started to really make his mark as a talent evaluator.

In 2010, the Blues shuffled their front office, removing Larry Pleau as GM, replacing him with Doug Armstrong. Armstrong was an outside hire, when many, including myself, thought that Kekalainen was the favorite to take over as GM. When he was passed over, he returned home to Finland to take over as GM of Jokerit.

Fast forward to today, and it looks like Jarmo has returned to the NHL. In taking the Columbus job, he becomes the first European General Manager in league history. With the Jackets desperately needing to build through the draft, the team is in great hands with Kekalainen. He can use his vast network of sources in Europe to evaluate talent there, in addition to the work he can do on this side of the pond.

With three first round picks this coming June, and with a master drafter at the helm, the Jackets will no doubt come away with a bounty of talent. The misfortune that has plagued the Jackets on draft day is history.