The Jackets continued their losing ways in a 4-1 loss to the Capitals.

Share All sharing options for: Game 7 Recap: The Skid Continues

As you may or may not have noticed, the boys and I rotate the game recaps. We all have our own methods and execution. When I'm covering a game, I have the game on the tube, with my notebook and pen at the ready for note-taking. The DVR gets a good workout, re-watching certain plays. If it's a weekend game, I usually have an adult beverage or two, as part of the creative process, of course.

Usually I fill a couple pages with notes. Tonight, I had three-quarters of a page.

This game was hot garbage, man. The first period, from both a Columbus and Washington perspective, was a sloppy bore. I thought to myself, these new division rivals compare favorably to each other. Outside of the fact that they have a top-3 player on their roster, of course.

Midway through the first, Ryan Johansen had a decent chance, hitting iron after getting a shot off on a partial break. The good news is that Joey was one of the best players for the Jackets on a what turned out to be a tough night. The coaching staff shuffled the lines prior to the game, with Artem Anisimov moving to the top line, centering Marian Gaborik and Cam Atkinson. More on Arty later, but at some point I'd love to see what Joey can do with weapons like CamJam and Gaby on his flanks.

The teams were tied at zeroes after the first, but 1:26 in to the second period Brandon Dubinsky was whistled for tripping. On the subsequent Washington powerplay, the Caps' Nicklas Backstrom showed why he's one of the top setup men in the game, forcing a Columbus defender to bite, sliding the puck to Marcus Johansson down low, who fed Joel Ward in the slot for a one-time snapper past Sergei Bobrovksy.

I was eager to watch Backstrom play tonight, with Columbus first rounder Alexander Wennberg's preseason comments on my mind. Wennberg compared his game to Backstrom's. If the Jackets can even come close to getting a player like Backstrom out of Wennberg, it's a total coup. Backstrom is a playmaking stud.

Interjection: The Caps really need to get a blue third sweater with the "Weagle" (their shoulder logo) as the primary. That would be a sick sweater. I may even have to buy one if they ever went down that road. Chimmer, of course.

About five minutes into the middle period, an incident occurred which typified the night to be for the Jackets. Clumsy and disjointed, with a touch of black humor. Nikita Nikitin, David Savard and Jared Boll found themselves drawn to the same point on the ice- the parcel of real estate occupied by Tom Wilson of the Caps. What followed was like something out of a sci-fi film, with Wilson employing a force field, knocking the three Jackets players to their respective asses. To whit, hastily-taken smartphone pics from my television: 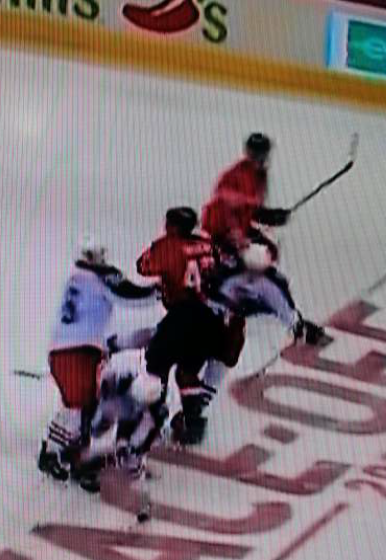 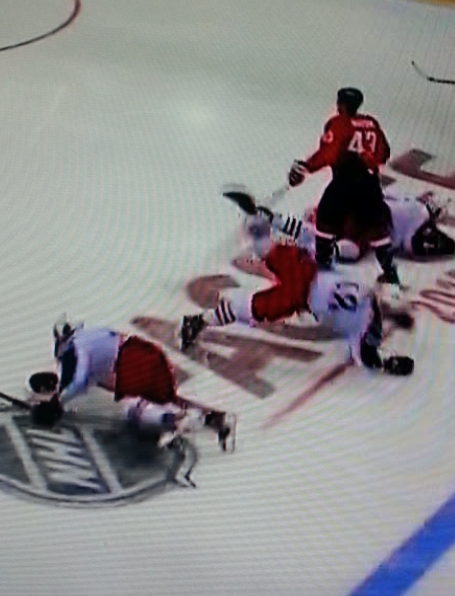 A few minutes later, offensive-friggin dynamo Steve Oleksy pulled off a toe-drag to Bob's left, fired off a wrister, with Bob making the save. The rebound, however, went to Brooks Laich, who made no mistake in giving the Caps a 2-0 lead.

I mentioned my notebook earlier, remember? At this point, I wrote the following: "crack wise about Adam Oates' shit haircut". Consider the burn delivered, Oatesy.

I'll tell you what, though. The Jackets pressured the Caps to end the second. Braden Holtby decided to end his (now common) habit of slow starts with this game, shutting the door time and time again. He had a terrific game.

4:20 in, (I'll stop myself there. A rule- you can't start a sentence with a digitized number. It must be written). Guess what, this is a blog, so let's start again:

4:20 in, after a turnover by Nikitin, Troy Brouwer gave the Caps a three-goal lead. Brouwer had all day to pick a corner of the net.

The Caps, though they had a big lead, really hadn't dominated play to this point. They started to tilt the ice in their favor after the Brouwer goal, and moments later Alexander Ovechkin, parked in one of his many dangerous areas, one-timed a blast past Bob from near the faceoff dot.

The goal was on the powerplay. Martin Erat, who so far this season has been a disappointment, tapped in to his former Central Division familiarity with the Jackets to put up three assists. I'll be honest, I've always liked Erat as a player. I wish him well, but only when the Caps aren't playing the Jackets.

Later in the third period, with the Jackets on the powerplay, frustration finally boiled over. Brandon Dubinsky, an emotional player at the best of times, dropped the gloves with Oleksy, after the latter gave him an extra shot after a scoring attempt. Dubi's passion was apparent, as he laid a few blows on the Caps' defender. Dubi is undoubtedly the heart and soul of this Columbus team. Stop dicking around and give him the "C" already.

I said I'd mention Arty later, and here it is. He foiled Holtby's shutout  bid with 4:55 left in regulation. Marian Gaborik, who missed last game with the flu, flew up the right wing, and ripped a backhand pass over to an umarked Anisimov. Arty made no mistake.

That was your final score. The Jackets are back at it tomorrow evening at home against the Canucks.

For you stat junkies, here's the Extra Skater Advanced Stats for the game.