Inside The Arena - It's Not Just A New Scoreboard

Share All sharing options for: Inside The Arena - It's Not Just A New Scoreboard

Though we've all been getting updates on the new Dispatch Media Center courtesy the Blue Jackets' live stream, it's one thing to read about the massive new HD scoreboard, and quite another to get a look at the new beast.

The interesting thing is, once I started talking to Game Ops director Derek Dawley, I realized how much of a revamp Nationwide Arena is getting.

"This arena is, pretty much, still the top of the league. The layout, the facilities, the design, they all stand up against any building in the NHL. But the electronics...all of the equipment dates back to when it was built. That's twelve years. Do you remember what your phone was like twelve years ago? Your computer?" The previous server rack that controlled the team's lights, sound, etx was the size of a small counter. Now they have a respectable closet's worth of big iron, plus a sizable data center in the video production room at ice level.

It's somewhere between shocking and staggering to consider what the team has been doing with that equipment, and how much has been accomplished before these upgrades.

So, now that we know that, what else is being done? Well, let's start from the top...

The area that now houses the lighting operations (including the goal horn), sound, our own CBJ DJ, and Derek's chair where he manages the game is now a large extended "suite" on the press level, where before each was split into separate rooms that not only required the group to communicate by headset, but occasionally restricted their view of the game action. 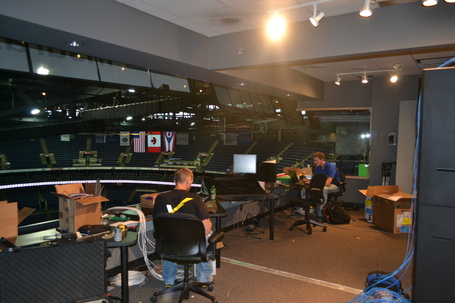 Things are much improved now, and even as the equipment is still being installed, it's clear to see that the new suite will offer better visibility and better communication for the entire game ops team.

At the moment, the arena floor is dominated by the scoreboard and the attendant equipment being used to install it. 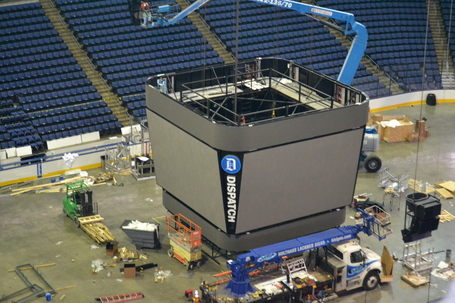 The old scoreboard came down the day after the Blue Jackets welcomed OSU's new freshman class in late August. Once the new equipment was delivered on August 22nd, crews have been working constantly to bring the new gear online. "7 days a week, guys are in and out day and night", Dawley explained, and it's starting to pay off. The new LED displays ringing the arena are already functional, running calibration patterns as they confirm that everything works as intended. The "media center" itself is actually in the final stages of assembly - the crew hopes to be firing her up for testing in the next few days.

(Just to point home how big this new scoreboard is...here's a look at the INSIDE of the scoreboard, including the catwalks that will be used both for assembly and maintenance.) 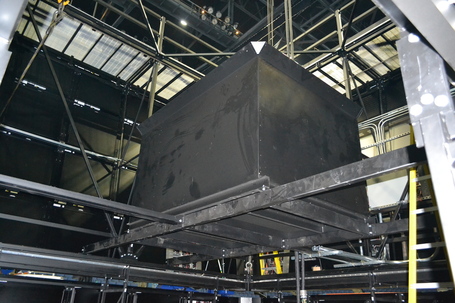 Fans will also be able to see new displays handling out of town scores, stats, and penalties where basic displays had been providing information at either end of the arena. In fact, fans are going to be seeing a lot of new features, starting from the moment they enter the arena.

"With everything we're doing, it doesn't make any sense to keep those old tube monitors all around the concourse and suites. HD flat panels will be going in all over the arena. Not one for one, because we'll try to improve how they're arranged for fans, but you won't see a single CRT once we're done."

Once you find your seat, there are a few other improvements you'll notice, and perhaps a few that you might not.

At the party towers, the current sign boards are in the process of coming down, starting with the large ads located at the top of each tower. 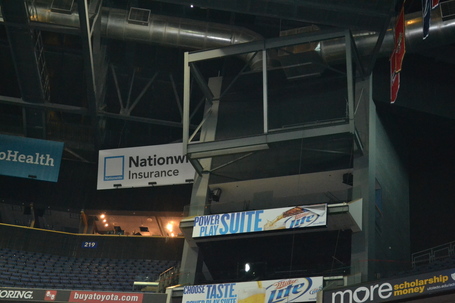 In their place will go an all digital display system, mostly for advertising, but Derek promised "a few special things" in store once the season begins. The new frames are massive, being welded into place section by section (I happened to see one of them being hoisted up while we walked the arena floor), and each of the larger display boards will have upper and lower maintenance catwalks to make them easier to maintain.

As to the boards themselves, the displays on the tower won't be true HD, but they will feature much higher quality than the old system. Here's a look at a few of the component sections waiting to be assembled. 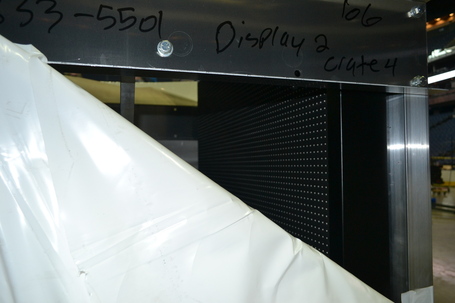 Another improvement? The new stanchions and dasher boards. 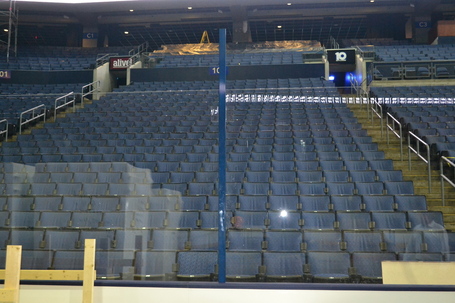 In addition to the thinner blue stanchions, the dasher boards now feature a "seamless" construction that eliminates the "rim" around the bottom that could cause problems with odd bounces or sometimes even skates getting stuck. In addition, the tops of the boards are now made from an absorbent rubber that will offer better protection on impact than the previous hard plastic material.

Last but not least, the final major improvement for the fans will be a new sound system to bring the noise.

"It's ambitious. Normally all these projects would take a year, easily. We'd been talking about it off and on through most of last season. Then the all star game and the arena lease came together and really spurred this into high gear."

The most impressive change, however, may be in an area that fans won't be able to access, though the results will be obvious for everyone - the video production room. 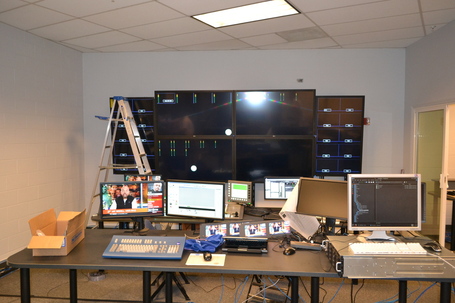 In addition to the new displays and layout tools, the production room now features an editing room (the door to the right), server racks, and terabytes of storage to support the all digital video system.

The arena will feature in-net HD cameras, above ice cameras, and more angles than ever before, all of which will be transmitting their footage down to the production team. As they review the footage, they'll be able to edit highlights and replays within moments, to share them on the main scoreboard or publish them online. "We're going to be able to do so much more than just cut basic replays. We'll be able to add digital effects, help to show highlights, and much more."

The more I talked to Dawley, the more obvious his enthusiasm for the new upgrades becomes clear. "Players who have been to Nationwide before aren't going to recognize it! There's so much that we'll be able to do."

He also recognizes that with all the changes this offseason, there will be a lot of challenges in the new era of Blue Jackets hockey. "This is...really a fresh start for everyone. I've talked to guys in New York, Ottawa, Phoenix...learning about all the guys coming in. We're really starting from scratch in a lot of ways."

With that fresh start comes plans to focus more and more on the city itself as they build the new game ops environment.

"One of my goals is to show that we're not just the Blue Jackets - we're the Columbus Blue Jackets. This is an amazing, beautiful city, and I want to make it a big part of who we are and what we do."

If everything goes well, and the CBA negotiations get back on track, the club will start to unveil the new game experience with the pre-season match on the 24th.

It's likely to be a lot of hard work and sleepless nights before that happens, but the more I see, the more I believe that fans in Columbus are in for a real treat, particularly when the time comes to welcome fans from around the NHL in for the All Star Game festivities.

Thanks to the Blue Jackets and Derek Dawley for the opportunity to go behind the scenes!