Tweeting Me Out To The Ballgame

Share All sharing options for: Tweeting Me Out To The Ballgame

Because this is a hockey blog, you're going to have to forgive me for a bit while I talk about...baseball.

The Blue Jackets reached out to several CBJ bloggers and "social media" personalities to ask if we'd like to go up to the Jake (yeah, yeah, I know what they call it now. It's still the Jake) and check out their "Social Media Suite".

In the interests of full disclosure, the team paid for our tickets, the transportation to and from Cleveland, and pizza for the drive up plus a meal at the game. I was not offered any financial compensation to write about the trip.

So now that that's out of the way, let's talk about the suite, and how it matters to the Columbus Blue Jackets.

Our party for the trip consisted of myself, several members of the Blue Jackets digital media / marketing team, members of the Pepsi Power Patrol and other in-arena promotion crews, Leo Welsh, and two other CBJ bloggers whose identities I will not reveal in case they also plan to write their own bits.

Once we arrived in Cleveland, we were met by Curtis Danberg, the Indians' senior manager of Communications, and got a brief tour of the park, including a chance to walk on the field during the Tigers batting practice. 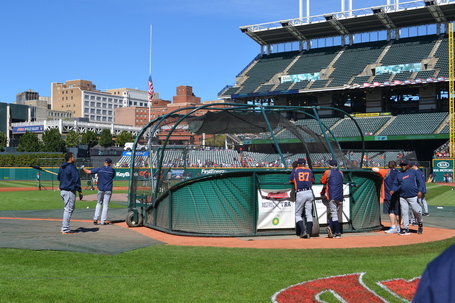 During the tour, one thing I noticed around the ballpark was promotions by the team to take advantage of fans packing their smartphones. QR codes around the ballpark let you scan them to sign up for giveaways and the official Indians fan club. Fans were encouraged to take pictures and tweet them with a "#Tribe4life" hashtag to get them up on the scoreboard. But nobody really talked about the social suite itself outside of the sign on the suite railing.

After the tour and lunch in the club's press cafeteria (perhaps not as gourmet as the spread at Nationwide as made famous by Ryan Holtmann, but a beautiful view), we were shown to the suite.

On the one hand, it's about the same as most suite boxes, and the basic amenities are about the same as a suite at Nationwide Arena, but on the other, there are a few key differences. For one, the suite has it's own dedicated Wifi access for the fans sitting there (it holds about 20 total, but because of our visit the club only had 8 guests on hand). Banners were hung on the wall for fans to tag with their twitter accounts, favorite hashtags, or general silliness, and a wall of chargers to support phones or laptops were there to make sure you wouldn't run out of juice during the event.

Oh, and the view isn't half bad. 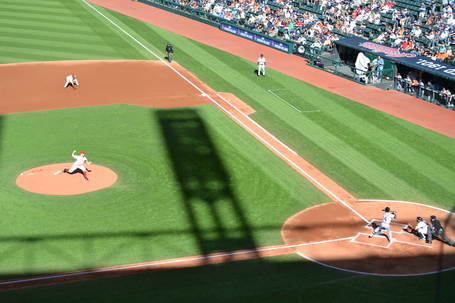 When I talked to some of the fans at the suite, I found out they had to apply to get in. Two of them are big fans of the club on facebook, and responded to their updates there. The others were mostly on twitter, though one was the father of the club's "Rally Baby". (Sadly, if you know the score to Saturday's game, you know that the Rally Baby was not quite enough to overcome three early errors and the Tigers' big bats, but hey, the baby was pretty cute.)

Most agreed that they liked the way the Indians reached out and connected with fans, even when the club went into the toilet this summer, and they felt like the suite was a good perk for fans who interacted with the club online. We discussed the challenges of rooting for a struggling team, and shared in lamenting the existence of Detroit fans. On the other hand, they also mentioned that it was rare to see the club actually retweet or share stuff posted by fans from the suite, and as the game went on they were less concerned with talking about the game, and more focused on their fantasy football and just how badly the Browns were going to lose to the Bengals on Sunday.

Oh, and a certain bearded gentleman may have done an interview for Jackets TV. 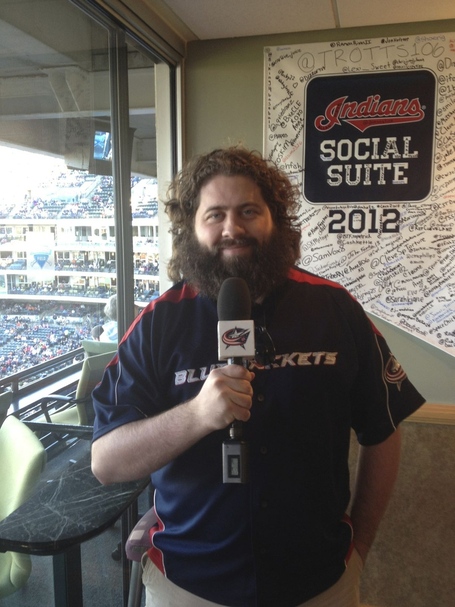 By the end of the night, the Tribe's late attempt to get back in the game petered out, the fans in the suite said friendly goodbyes (and took invitations to come down to Columbus to visit for a hockey game some time), and we had a ride back to Columbus thanks to our friendly bus driver.

It was a very fun afternoon, but more importantly, I took away a few keys that I think the Blue Jackets can embrace, especially if they plan to offer a "social suite" of their own.

Perhaps one of the things working against the Indians is the general pace of a baseball game. It's a languid sort of sport, and it pairs well with lazily sipping your beer as you wonder when something interesting might happen. With the faster paced set of hockey, I think it's actually better suited to fans getting up to tweet about a sick goal, a bad call, the big hits, or a crazy fight, helping to fill in those feedback loops.

The more intimate atmosphere at a hockey rink may also help to bring fans in - it's easy to feel closer to the team when you don't need binoculars to see a guy's face after he celebrates a goal, after all, and the way NHL players have taken to twitter and facebook helps to build more connections to fans using those platforms.

All in all, it's an experiment the Indians have made and handled well, and one that I hope that we'll see the Blue Jackets take as a baseline to improve on.