Share All sharing options for: Canada-Russia Challenge - The Columbus Angle

This week featured a special treat for my fellow Haligonian hockey fans and I, as games three and four of the Canada-Russia Challenge were hosted by Halifax, following games one and two in Yaroslavl, Russia.

The just-completed tournament was a first of its kind, replacing the summer tryout camps that have traditionally helped determine the World Junior team, which takes part in the World Junior Hockey Champiosnhip every Christmas.

The Canada-Russia Challenge this year honored two events, one somber, and one that is considered to be one of the greatest hockey moments ever. The former pays tribute to the loss of the Lokomotiv Yaroslavl squad in a horrific plane crash in September of last year, while the latter of course honors the 40th anniversary of the 1972 Summit Series between Canada and the Soviet Union.

The series featured some of the best junior-aged players in the world, and there were two Columbus prospects featured on the Canada roster- Boone Jenner and Ryan Murray. 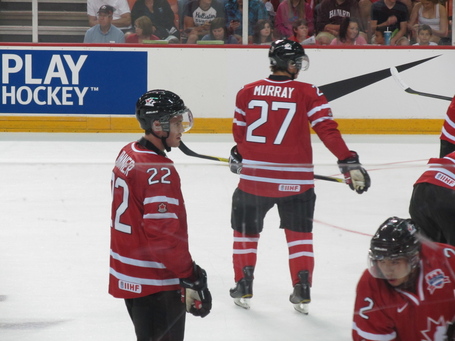 Want to know how they looked in those two games? Read on.

Game three was wild. Canada fought back from a pair of two-goal defecits, but ended up losing 6-5. This was Murray's best game, he was incredibly steady with the puck, and even joined in on the offensive action, finishing with a goal and an assist.

Five-on-five Murray was paired with London Knights defender Scott Harrington in a shuitdown role. The pair also killed penalties together as the top unit. Murray was also on the top powerplay pairing, lining up beside Carolina draft pick Ryan Murphy. Murray's goal was scored off his own rebound after his point shot was saved. He followed up, jamming the puck home. Murray also wore an "A" on his sweater. 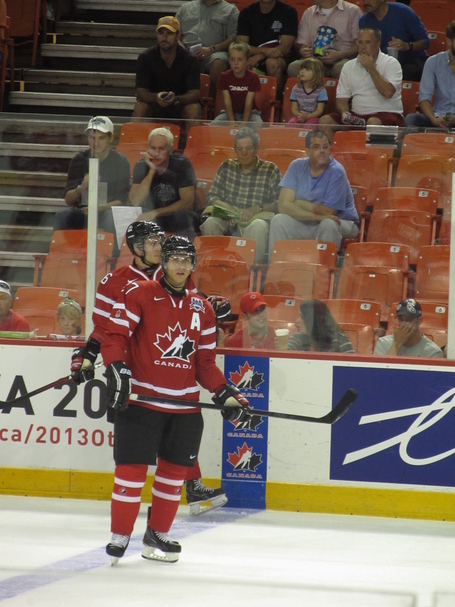 Jenner was used in a checking role as the center between Charles Hudon and Phillip Danault. He showed keen defensive awareness, performing very well on the backcheck. He also had some bursts in the offensive zone, but was unable to get on the board. He also wore an "A" on his sweater. 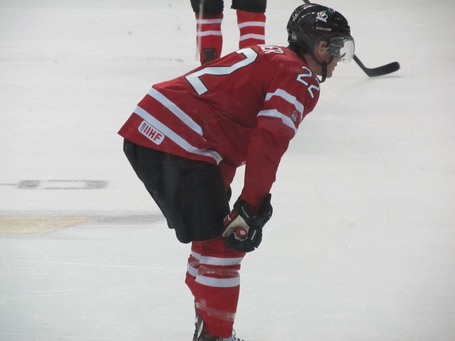 Game four was far more structured defensively than the previous contest. Murray continued to play very steady hockey, but was paired with Murphy for the majority of the game. If both of these players are released to play for Canada this Christmas, they will form a phenomenal top pairing for Canada. Murray showcased his skating on various occassions, and made a fantastic play to break up a late chance for the Russians in-close on Malcolm Subban. He looked like a man among boys at times.

Jenner continued to bring strong defensive awareness, and had a pair of memorable hits. He has a ton of jam to his game, and was doing a great job of breaking up plays in all three zones. He has future Columbus checking center written all over him. The biggest disappointment was the fact we didn't have an opportunity yell "Boooooonnnne!" if he scored a goal.

Canada went on to win 4-2 in regulation, but the tournament organizers planned to have a decisive victor from the start. With Canada's win, that tied the series up at two games apiece. After a full intermission, the teams returned to the ice, four-on-four for a full 20 minute overtime period. If the game was still tied after 20, they would go to a shootout. Just minutes in however, Ryan Strome, and Islanders draft choice, scored to win the series for Canada on home ice. What a moment! 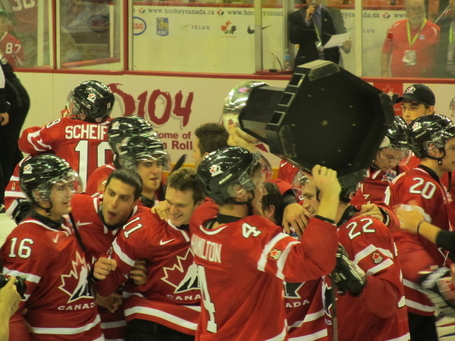 The two players, both returness for Canada, were great. It would have been great to see Boone rewarded with a goal or two for his effort, but nonetheless Columbus should be very excited about these two young men. They have what it takes to be fixtures in the Columbus lineup, sooner or later.

Some other thoughts and observations from games three and four:

- Prior to game four, in a bit of a surprise, some of the members of Team Canada and the Soviet Team were honored and perfoirmed the ceremonial puck drop. The highlight for me was the fact that Vladislav Tretiak and Ken Dryden were both there, the two goaltenders that battled each other back in '72: 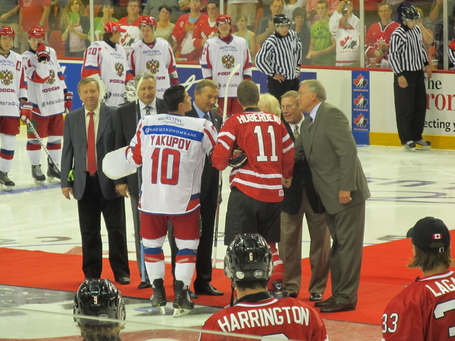 - Nail Yakupov is the real deal. He was rested for long stretches, but you always knew when he was on the ice. He didn't light things up offensively, but he was dangerous every time he had the puck. Some of his passes left you with your chin dragging on the floor. There was a very nice moment after the game, while Canada was celebrating on the ice, he skated around with a Lokomotiv Yaroslavl flag: 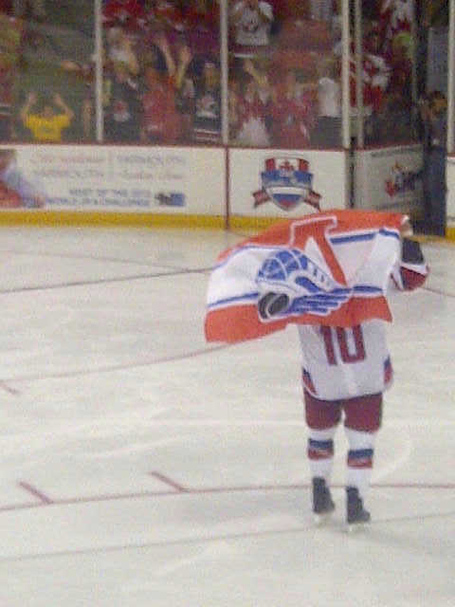 - Game four was interesting in that it featured a matchup of the two goaltenders taken in the first tound of this year's draft- Malcolm Subban and Andrei Vasilevski. Vasilevski faced more rubber, but both goaltenders were rock solid.

- The Russian team was a cocky bunch, celebrating with "hush" motions, salutes and other such nonsense. I'll give them this much though- they are a fast, talented bunch. You make a mistake, and they'll burn you.

- My MVP for Team Canada is Ryan Murphy. The guy is just a stud, playing well in both offensive and defensive situations. There was one point in game four where he shredded the Russian defense, just missing the net by inches. He also has a booming slapper, and was breaking up plays all over the ice.

- Three of Canada's snipers- Mark Scheifele, Jonathan Huberdeau and Ty Rattie were a treat to watch. Rattie should be a lock for Canada, but here's hoping that Scheifele and Huberdeau are released by the Jets and Panthers, respectively.

- I am firmly on the Tom Wilson bandwagon after seeing him play live. The Capitals' first rounder in June, Wilson is a wrecking ball on the ice, but maintains control, generally speaking. He is so physical, but can also contribute to the overall game plan as well.

- The two 2013 draft eligible Canadian forwards- Hunter Shinkaruk and Sean Monahan-each gave me different impressions. Shinkaruk only played in game four, and aside from some nice dangles, he didn't contribute much. I did notice that he seemed a bit immature, being the only guy bouncing around like a maniac during the opening ceremonies, and doing silly tricks with the puck when the camera guys trained their equipment on him. Monahan, on the other hand, was a fixture for the Canadian squad. He was heavily involved in the offense, and has great size. I really look forward to tracking this young man's career going forward.

- Dougie Hamilton didn't wow me, but maybe that's the point with a guy like him?

- Ottawa first rounder Cody Ceci really impressed me. He looks bigger than I thought he'd be, and brings a little bit of everything to the table. When paired with Toronto top pick Morgan Rielly, the two had some decent offensive opportunites, but were a little inbalanced to be a pairing long term.

- Islanders draft pick Andrei Padan is a lanky bugger, but for a big man can skate very well. You couldn't miss him, what with his gangly appearance and clashing Islanders gloves.

- Nikolai Prokhorkin, a fourth round pick of the Kings, looked pretty good. I seemed to notice him quote a bit in the offensive zone. He was taken late in the CHL Import Draft by London, which tells me he may be looking at making the move to the OHL.

- Anton Zlobin looks like a draft steal to me. Pittsburgh took him in the 6th round in June. He plays in the Q, and is known as the player who scored the winning goal for Shawinigan at the Memorial Cup.

- Speaking of Zlobin, he mostly played with Yakupov and Mikhail Grigorenko. I'm sure he'll be just fine, but Grigorenko was a non-factor in the two games in Halifax. It was disappointing for me, because I am used to seeing he and Nathan MacKinnon duke it out on Metro Centre ice.

Overall I am over the moon that little ole Halifax was chosen as a host city for this tournament. I think Halifax was a good host, and the two teams put on a real show. High-level hockey in August is a treat for any hockey fan, and I was especially happy to see Columbus prospects Ryan Murray and Boone Jenner in action.

*All photos by Holly MacLean and Iain Taylor.