He has yet to play a regular season game for the Jackets, but the Jackets drafted more than just a stud defenseman in the first round of the draft this past June. In all likelihood, they nabbed themselves their future captain.

Everywhere he's played, Ryan Murray was considered to be ahead of the curve, a man among boys, so to speak. I've created a quick (and dirty) timeline to show just how much his leadership and maturity has earned him the respect of his coaches everywhere he's been. 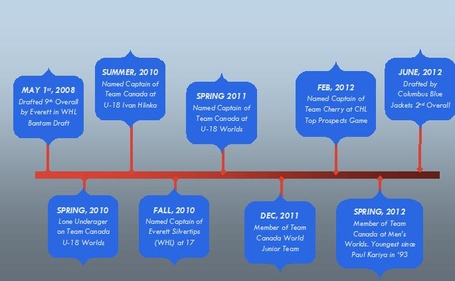 Not only did he impress his own coaching staff in Everett, making him their youngest captain in franchise history at 17 years old, he also was a leader at the international level, wearing the "C" for two Under-18 Team Canada squads. Just to add to the resume, he was also captain of Team Cherry at the CHL Top Prospects game- an honor in its own right.

One of the biggest signs of his maturity is his inclusion on Team Canada at the Men's World Championship. This is no small feat- Murray is the second youngest player ever to play at the Men's level at this tournament- the youngest was Paul Kariya back in 1993.

The next step in his career is to make the jump to the NHL. Many scouts beleive that he is NHL-ready, and if his career thus far is any indication, he's more than ready to step in and contribute.