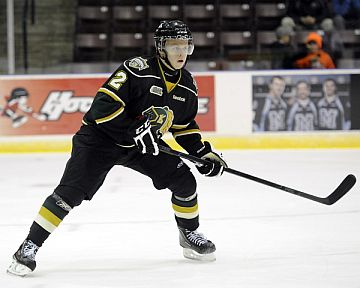 The London Knights saw the potential in Maatta. Enough so, that they traded third year defender, Reid McNeil, their own first round pick (25th overall) and 2013 second and third round picks so that they could take him as the number one pick in the CHL Import Draft.

Presently, it looks like some pretty shrewd shopping as the Knights are embroiled in the OHL Finals against the Niagara IceDogs. Maatta leads all rookies in playoff scoring, adding a helper on Monday night in a 3-2 win over Niagara, giving the young Finn 6 goals and 15 assists for 21 points in 17 playoff games. He also potted the game winner on Saturday night for London. His scoring prowess should come as little surprise. He led the Knights defense corps in scoring this season (5-27-32 in 58 games), while registering a +25.

"Olli is a very focused, level-headed kid. He’s very cerebral, with a very high hockey IQ. We knew when we drafted him that the transition from playing in Finland to playing here (in London) would be seamless, because of his work ethic. He’s a tireless worker."

"Olli picked up the new style of the Canadian Hockey game rather quickly. Still, as a young kid, there are certain aspects of the game that he needs to develop. From the strength and the release of his shot from the point to being in the right position to take and deliver big, physical hits, it takes time … still, I believe that Olli is willing to do all the work to excel."

"Olli will have a long career as a pro. He’s definitely in the discussion with all the other defensemen expected to go near the top of the draft."

A defenceman with a good frame. Very good overall skills, though better defensively. A very patient player who positions himself well. Excellent hockey sense. Doesn't usually go for big hits, but likes to play the body enough to steal the puck.

Olli's adaptation to the smaller North American rinks has been another positive in what has been a fine season thus far. His consistency as a puck moving defender, something always desirable for the Jackets, can be documented reasonably well over the past few seasons as his assists to goals ratio hovers around 3:1. Currently, the 17 year old at 6'2" and just over 200 pounds, asserts that he will continue to develop physically and claims any added mass won't affect his skating. He draws on fellow countrymen Teppo Numminen and Kimmo Timonen as inspiration, if not outright role models.