For most of the season, Grigorenko was the consensus number-two option behind Nail Yakupov, though the NHL ranked him third in their final North American skater rankings. Grigorenko was the highest scoring rookie in the QMJHL this past season, and finished second in team scoring in the regular season. He is an offensive whiz with a big frame, earning comparisons to Evgeni Malkin. While I doubt Grigorenko will ever come close to putting up the points that Geno does in the NHL, Grigorenko remains a high-end offensive player.

There is some concern over his play in the playoffs- he put up a respectable 10 points in 11 games, but that was only sixth-best on the Remparts. The team ended up losing in the second round of the QMJHL playoffs, going to a seventh game against the Halifax Mooseheads.

In addition to the playoff series, I was also able to see Grigorenko earlier in the year when the Remparts came to Halifax. In the regular season matchup- billed as a battle of the top two rookies in the Q, Grigorenko and Nathan MacKinnon- the latter stole the show, potting five goals. Grigorenko had a so-so game in the lopsided loss. Here's a photo of him at the end of serving a two-minute minor from that game: 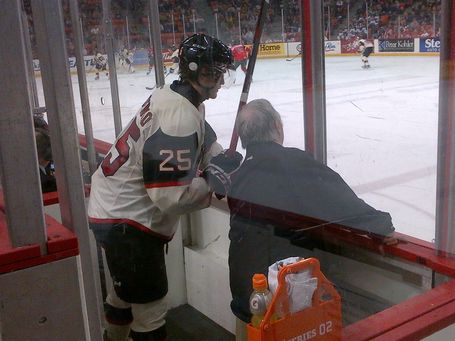 In the playoff series against Halifax, I watched him closely, and found him to be largely ineffective. The Remparts were able to win the first three games of the series, but Halifax came back to win four in a row to move on to the next round. Had Grigorenko been the offensive weapon he was in the regular season, it'svery likely that the Remparts would still be playing today.

That said, if he can add some toughness to his game, both mentally and physically, he'll be a premier offensive forward in the NHL. Otherwise, he'll be KHL-bound sooner, rather than later.

"He's the type of player that controls the whole pace of the game. He can play with the puck at the same pace he plays without the puck. He sees the ice and opportunities really well. He can hang onto it longer than most players; some players might feel that they have to move it quickly, but Mikhail has the patience and the ability to see opportunities and let them develop, which is a special skill. He's got a big, long reach and an ability to move in traffic with his size (6-foot-3.25, 200). He's the kind of forward who will control the play and make things happen."

Grigorenko is a big-time talent who will be taking his game across the pond to play under Patrick Roy as a Quebec Rempart this season. He’s got a big frame that he uses well in unison with an elite skill-set. Has very good hands and does a good job of controlling the play with his ability to fight off checks and create scoring chances. Should be one of the top scorers in the QMJHL this season and could wind up leading the league in assists. Needs to show a little more consistency and prove that he can handle the tight-checking that teams are sure to challenge him with. One of a number of players who will challenge Yakupov for top honours.

Though I think he's a better fit with the Canadiens at third overall, Grigorenko could be of interest to the Jackets when they pick in the second slot. With the likely departures of Rick Nash and Kristian Huselius, the Jackets will need a dose of scoring. Grigorenko provides that in spades. Overall however, I think the Jackets should pass on this player and focus on forwards like Yakupov, Filip Forsberg or one of the many excellent defensemen available.