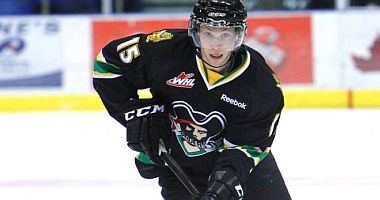 The 2011-12 season had to be a bittersweet experience for Mike Winther. After adding just 10 points in 61 games in his rookie season, Winther saw his point productivity improve to 32-24-56 in 71 games for Prince Albert. The downside to the season was the dead last finish of the Raiders.

Focusing on the contributions of Winther, he became a special teams expert this season, scoring 20 (16 PPG, 4 SHG) of his 32 markers in man advantage/disadvantage situations.

Diminutive in size, but long on ability, Winther has the makings of a compact power forward. His special teams work speaks for itself. However, looking deeper, he plays a smart game. He is dedicated to the team and is willing to play a more physical game when the conditions demand it.

His quick, soft hands make him especially dangerous. His size complements his ability to locate open ice, where his skating speed comes to the forefront.

"He's sneaky-good; he's very deceptive with his skating. Not breakaway speed, but enough speed to get in and out of trouble in close quarters. … Mike has great on-ice awareness. He knows where guys are before they even get there. He does the little things that aren't in the book and you can't explain; you just have to see it for yourself."

Although Jackets fans have only had a brief glimpse of how Cam Atkinson might operate at the NHL level, a comparison can be made between the two forwards.

How that would affect the Jackets three, four, five years down the road is anybody's guess. With some of the changes the Jackets have made in the past couple of seasons, it became apparent in the waning days of the Scott Arniel regime, that the players expected to jump start an offense weren't responding and the Jackets needed to revert to a more physical, and less comfortable, style.

A player of Mike Winther's caliber could further deepen what could someday become an offensive juggernaut at Nationwide. Todd Richards in his half-season audition, showed to an extent that he's able to get some more mileage from his forwards.

A bonus is Winther's willingness to mix it up. Here's a fun little scrap with Ryan Olsen of the Saskatoon Blades: