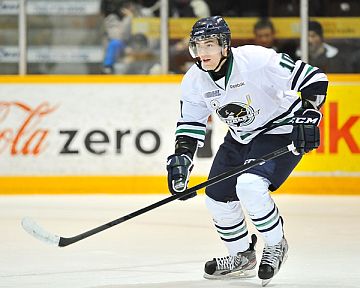 Wilson's exuberance did not go unnoticed this season. Not by his opponents in the OHL, and especially not by the NHL's Central Scouting Bureau. Wilson's stock rose from a mid-term rank of 33rd and improved all the way to 15th among North American skaters by the end of the season.

Employing a style reminiscent of Milan Lucic didn't hurt the 18 year old either. Despite his obvious ability to play a punishing, physical game, Tom showed a bit of a scoring touch this season, capping it with a point per game pace in the playoffs.

Despite the comparisons to Lucic, Tom is approaching a crossroads in his young career. While most are in agreement that he'll likely be drafted late in the first round or early in the second, the consensus isn't as cut and dried when it comes to the type of player he'll eventually become. Some say he's a certain top six forward, others feel he may be relegated to a third or fourth line enforcer. I tend to think that he can be somewhere in the middle, as he's shown an ability to put points up with regularity, something that ordinarily doesn't come along with an enforcer.
Scouting Report:

Wilson is a very imposing winger who has thrived with the Plymouth Whalers this season as a forward who brings plenty of size, grit, and physicality to the team’s lineup. Wilson is versatile and has enough ability to play with skilled players while playing a physical role. His skating has steadily improved and his willingness to take the body with his size creates a lot of space for teammates. He’s good in the corners on the cycle and does a good job wearing down opposing teams as well. It is concerning that he only has 6 goals while playing with players like Stefan Noesen, Rickard Rakell, and JT Miller, but Wilson is a player who is likely going to take some time to grow into his frame and find out just how high his ceiling is.

Having Jared Boll and Derek Dorsett in the lineup, the likelihood of adding another similar style gets reduced greatly. That is, unless Columbus pro scouting sees a greater upside in Tom Wilson's offensive skills, than in his readiness to drop the mitts.

Kings pick aside, if there are no takers for Wilson in the first round, the Jackets might be faced with such a quandary. While I feel Wilson is entertaining to watch, as he matures, I keep returning to the Lucic comparison. And while I like Dorse, the imposing 6'4" and potential 215-220 pound frame says a lot more than Dorsett's 6'0" and 192 pounds which invariably make Dorse an underdog just about every time out.

Tom Wilson is at a point in his career development where he needs to work on his playmaking and scoring. The physicality has already taken care of itself and as his body matures, that too will continue to improve. Wilson would also do himself well to examine the career paths of two other ex-Plymouth Whalers - Jared Boll and Tom Sestito. Neither Boller nor Sestito have developed their scoring knack thus far, and at this point in their careers, have become primarily enforcer types. After that, the comparison to Lootch looks pretty good.

Finally, I like to add a video or two here at the end of these draft prospect profiles. Culling youtube produces endless Tom Wilson fight videos. Here is a goal he earned in the Ivan Hlinka U18 tournament. What I like about the play, is Wilson cycles and ends up in the high slot and having the presence of mind to still get stick to puck in time to redirect the point shot.