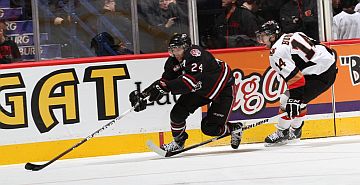 Matt Dumba is a diamond in the rough. His physicality, scoring ability and maturity are key ingredients in making the Red Deer Rebel defenseman one of the more sought after players in the upcoming draft. The bruising defender has been favorably compared to Dion Phaneuf in some circles. Dumba plays a similiar style to the Leafs captain. It's a style that has suited him well thus far, and provides the building blocks to someone, who some day, should be a legitimate NHL star.

Red Deer selected him with the fourth overall pick in the 2009 WHL Bantam Draft. In the 2010-11 campaign, Dumba played 62 games for the Rebels (15-11-26 +23) where he established himself as a 16 year old. The Rebels fell short of playoff action this season, but it was another strong year for Dumba, as he competed in the U18 World Juniors. As team captain, he recorded 5 goals and 7 assists in just seven games.

Matt Dumba is a strong and swift skater with a big shot and a knack for delivering open-ice hits with his six-foot, 172-pound frame. Scouts are also very impressed with his lateral movement and the physical element of his game. Rebels VP of Hockey Operations Randy Peterson says that Dumba can run a powerplay well, and is a big-time player with a great shot. Offensively Matt is just as good, if not better than he is defensively. He has a hard and accurate shot that he gets through to the net consistently. Matt’s puck control is top notch, he’s able to beat players one on one and drives the net like a power forward. One of the biggest things about Matt’s game is that he makes very few mistakes, and the few mistakes he does make, he’s able to recover from by using his good hockey sense. The Calgary native was the WHL Rookie of the Year for the 2010-2011 season, and certainly has the potential to be a top notch force in the NHL some day.

Due primarily to where the Jackets will pick (barring a trade), I think it's unlikely that Columbus will have the opportunity to draft Dumba. Although it seems like the Jackets are finally starting to experience stability with the number of defensemen in the system, the potential in adding Dumba to the mix would further enhance what is shaping up as a strong defense, both up top and down in Springfield. Regardless of where he ends up, it will be interesting to watch his progress over the next few seasons.