2012 Blue Jackets Season Wrap Up: The End Of The Tour

Share All sharing options for: 2012 Blue Jackets Season Wrap Up: The End Of The Tour

After the Jackets' 7-3 victory in their season finale, the mood in Nationwide Arena was an odd mix of pleasure, frustration, and regrets.

There would be no crowd. The ice surface still remains, silent, for at least a few more days. Members of the equipment staff ducked in and out of each hallway, gathering sticks, pads, tape, jerseys, and other equipment.

In a strange bit of "bittersweet but appropriate", the only members of the media who arrived at the appointed time for press access on Easter Sunday were myself and 97.1's Lori Schmidt, who shared her thoughts at her blog, Fear The Hat.

The first player we had a chance to talk with was Derek Mackenzie, who was in a reflective state of mind. Finally given medical clearance to practice and play after passing concussion testing, he's in the same spot as many fans. He doesn't really know what the summer will bring, though the Unrestricted Free Agent is very interested in returning to Columbus.

"We started something. I want to finish the job here."

Not every player was there - and of those who were, some had their own priorities. Rick Nash, for example, spent some time talking to teammates after meeting with both GM Scott Howson and interim head coach Todd Richards, but it was understood that he would not be meeting with the press. R.J. Umberger spent over a half hour discussing matters with the GM and coach, but then had to get out the door because his family was expecting him for Easter Sunday.

Cam Atkinson is one of the few who will be playing again soon - as part of the Springfield Falcon's clear day roster, he'll be heading to Massachusetts along with Ryan Russell and Maksim Mayorov to help them in the last chance playoff push - though the Falcons' loss to St. John today makes that road even harder.

James Wisniewski stayed long enough to give defensive partner Jack Johnson some fairly serious ribbing from the sidelines as he met the press, but needed to leave soon after so he could take care of issues with his car. Like a pro, however, Johnson kept his cool and just kept answering questions through the commentary.

We forget that even though these players get to travel around the country playing hockey and basking in the crowd, they also have lives away from the rink, and sometimes that takes a major toll.

Curtis Sanford, for example, never saw his family this season. They remained in Owen Sound, 500 miles away. Unsurprisingly, he hopes to return to Columbus next season in a mentorship role. He's seen what this town can offer, and he would love to share it with his family.

For Shawn Hunwick, once he finished his meetings, his goal was to load up his truck as quickly as possible. After all, he needs to get back to Ann Arbor for his Astronomy class tomorrow morning.

For the record? It's a lucky truck. 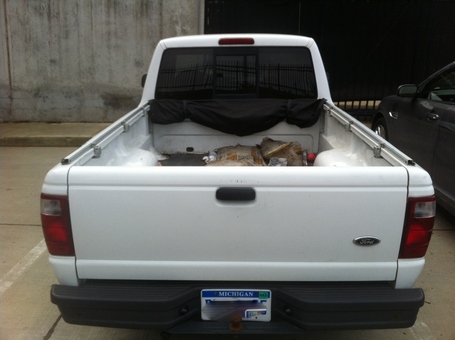 "My brother drove it around Boston after he went pro", Hunwick said, "It's been good for me - and it got me down here the last 10 days."

He doesn't know if the Jackets will take a look at him in the offseason. He isn't sure if another NHL team is interested. He might not even end up in pro hockey - once he finishes his degree, he plans to polish up his resume and keep an eye on the job market.

Then there's the partner who asked coach Richards to make sure Hunwick got into the game - Steve Mason, who appreciates the struggles of the position. He's felt the roller coaster of this season, and continuing to find the consistency that both he and the fans have craved for so long.

As several players finished wrapping up sticks or bagging gear for shipment to their offseason training, homes, or stranger destinations, a few more media members stopped in for brief soundbytes, but left soon after. The few guys left were the grinders, the muckers, and the required. Brett Lebda, Aaron Johnson, and Jared Boll would be some of the last players to meet with Howson and Richards, trading jokes and giving each other good natured grief as they relaxed in the hallway outside the locker room.

There is a sense of pride that they finished better than they started. Satisfaction at the trade union beatdown they administered by the end of last night. But it's still packing up in April, when every player wanted to be playing until June. For many, the goal is to go home, rest up, then start preparing in mind and body for the next challenge. For more than a few, they hope that they have made their mark in Columbus, and that either the Blue Jackets or another NHL club will be interested in their services. Each hopes to be here (or another NHL camp) in September with a fresh start, a clean slate, and a new chance.

For the man who has to make those decisions (among many others), though, the job is just beginning. It's a very open question if Scott Howson will still be here in Columbus, but for now he's the man in charge, and he's working on deadlines. Heading to Europe to scout at the U18 World Championship tournament, he'll be evaluating players like Nail Yakupov and Filip Forsberg, among others. He's also looking at making sure the team's RFA players are qualified and re-signed - he was quite firm that Nikita Nikitin, Derek Dorsett, and Jared Boll would all be addressed before July 1st - and to make decisions on players like Sanford and Mackenzie before they reach the open market.

He also had to keep track of the health issues for his players, and for a team plagued by so many injuries it had to be satisfying that all but three - Kristian Huselius, Mark Dekanich, and Radek Martinek - were medically cleared to practice and play at the end of the season. No offseason surgeries, no major question marks. Had the team been able to go on, everyone would have been ready to compete.

Oh, and there's the matter of Rick Nash. When asked about the situation with his team captain, Howson stated that the two met in Denver - and that they planned to talk again in the next few weeks.

Have all the changes over the last 20 games been enough to change his mind? Did the performance of the team give him reason to think that perhaps he could be part of a winner here? Will the rifts between the star and the management heal?

These are the questions that will occupy everyone from fan to franchise over the next several weeks - but we may not truly know what this team is going to look like next season until the very end of training camp. 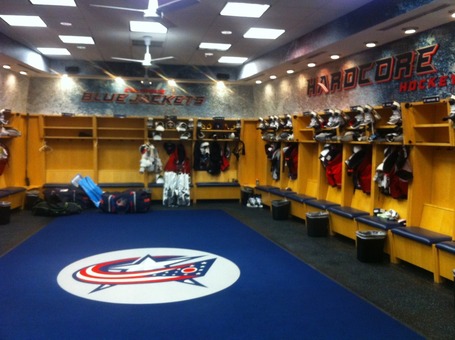