A Night at the Nest 2

Share All sharing options for: A Night at the Nest 2

Saturday night was a disappointment on the ice for the Springfield Falcons. However, some 40 feet above ice level, in the southeast corner of the MassMutual Center something truly memorable was taking place.

The occasion was "A Night at the Nest 2", something that has become an annual event for the Springfield Hockey Heritage Society. The night coincided with the Falcons honoring the city's first five Calder Cup championship teams.

Now that the night has come and gone, I can say without hesitation that the Falcons worked very hard to make the celebration just that. Planning for the Calder Cup nights started last August, and at several times during the process, we were asked by the Falcons to find players of the past. Even in the Google age, that can be a challenge. Some of the more memorable players were unavailable. Two that come to mind are Hall of Famer, Billy Smith who had a scheduling conflict. Also unavailable was Butch Goring, now the color commentator on MSG's New York Islanders telecasts.

In the end, it didn't really matter so much about who wasn't there, as who was. The Falcons own President and General Manager, Bruce Landon was among the honorees. Landon was a goaltender on the 1970-71 Springfield Kings. Also on hand, truly one of the faces of Springfield hockey, Eddie "Ted" Shore, Jr. Shore started his career in hockey under the tutelage of his famous father at age 9, when he was listed as "Vice President and General Manager" of the Springfield Indians. 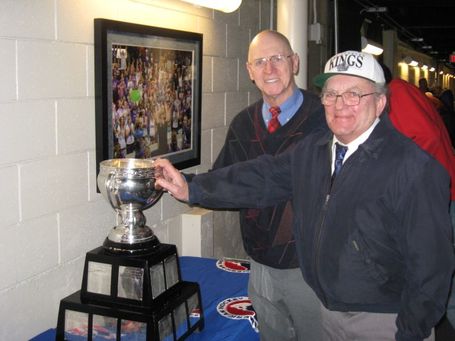 
Also honored was AHL Hall of Famer, Jimmy Anderson. By the time I had attended my first game, Anderson's career was winding down. In his prime though, the NHL only had six teams, while the AHL sported eight. Anderson was legitimately one of the greatest wingers of all time. Trouble was, he was playing at a time when there were only 120 jobs available in the six team senior circuit. By the time he got a taste of the NHL, he was a fading 37 year old who still managed to put up one goal and two assists in seven games on the expansion Los Angeles Kings of 1967-68. It seems a shame, but those were his only seven games on an NHL stage.


Anderson's playing days came to an end as he transitioned to duties behind the bench. In 1969-70 he played one game for the Springfield Kings, before taking over as the head coach when Johnny Wilson was temporarily promoted to Los Angeles. In the ensuing four seasons, Anderson coached in four different leagues: CHL, IHL, NHL (first coach of a putrid Washington Capitals expansion team) before returning for one last fling in '75-'76 with the Springfield Indians.

He was a member of the inaugural class of the Springfield Hockey Hall of Fame in 1996 and was honored by the American Hockey League in 2009 when he became an AHL Hall of Famer. Anderson remains a local resident to this day, where at 81 years young, he still takes to the ice a couple times a week, teaching area youth how to skate. A truly remarkable man!

At the other end of the championship spectrum is Steve Rexe. Most, if not all of you, are saying "Who?". Rexe was the #1 goalie of the 1974-75 Kings, when around the midpoint of the season he recalled the following:

Eddie Shore had taken the club back over from Jack Kent Cooke. After practice one day, I was outside the dressing room in my underwear having a smoke. Shore walked by me, patted my on the belly and asked if I was rasslin' in the main event tonight. I told him to f**k off. Next day, Ron Stewart (coach) tells me that I'm not playing any more home games the rest of the way. And that's how I became the road goalie and Rick Charron became the starter.

It should also be noted that he was the #1 draft pick of the Pittsburgh Penguins in the 1967 draft. Steve admitted that he was his own worst enemy, back in the days of thin, unprotecting goalie equipment. Rexe said that playing back in the 1970s was just like the movie SlapShot...except worse! 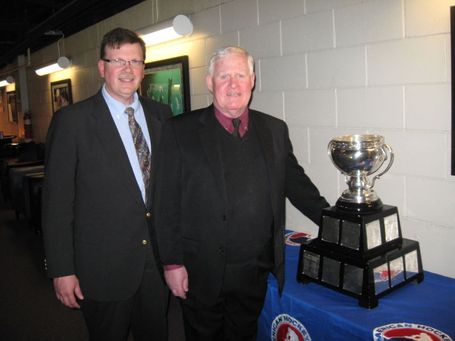 
The Society was also honored to be joined for part of the evening by none other than the President and CEO of the AHL, Dave Andrews. Andrews, as you'd expect is a terrific hockey mind and a pleasure to talk to. I asked him if the league had any expectations attendance-wise for the game at Citizens Bank Ballpark between the Adirondack Phantoms and Hershey Bears. The game drew a crowd of 45,653 in Philadelphia, the former home of the Phantoms. Andrews said that neither he nor anybody in the league anticipated a crowd of that size. He also said that the league's All-Star Classic, after a successful weekend in Atlantic City, NJ last week would be returning to traditional AHL member cities for the next two seasons.

I would be remiss if I didn't mention the entire Falcons front office, who have been so supportive of the Society's efforts. Bruce Landon stopped by after a difficult first period. Bruce still took the time to visit and say hello to everybody. Also paying a visit at various times during the evening were broadcaster and all around good guy, Mike Kelly. Director of Media Relations, Damon Markiewicz checked in as did Senior VP and Alternate Governor, Bob Oliver. Chris Thompson who had worked in the AHL office in the past was instrumental in getting the Calder Cup up to the Perch for a night full of photo op's...thank you! (Author's Note: the Cup is deceptively heavy!)

The gathering was also lucky to have in our midst several of the behind the scenes people, all of whom were responsible for making the Springfield area one of the most colorful and memorable places in the hockey world. All in all, a forgettable night on the ice and a memorable "Night at the Nest".