Springfield is not the same city that it was when I was growing up. Then again, what city is? I remember an ad campaign from at least a quarter century ago referring to Springfield as "the city in the country". Presumably in hopes of limitless convention and tourist revenue. It didn't last. On occasion, a local reporter will still refer to Springfield as the "City of Homes". I'm not sure where that one came from.

More recently, in the continuing coarsening of these United States, the city in which I was born has been referred to as "The Jungle". Strangely enough, the city is both all of these things and none of these things. A mind much brighter than my own describes it thusly:

You see, Springfield is not that much different than many other cities. The headlines in the local fishwrap generally point out the "what's wrong", while the "what's right" is destined for the second or third section. 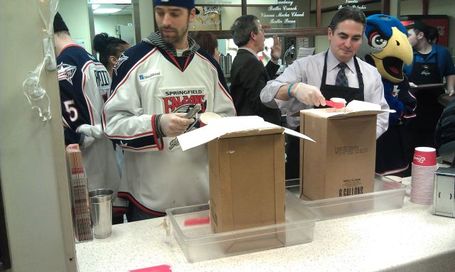 Something that is right - check that, very right with Springfield are the Springfield Falcons. I admit that in my weekly recap, I mentioned that the last time we saw playoff hockey here was when my oldest son was nine weeks old. Next week, he will be nine years old. That was not a knock on anything Falcon-centric. Not in the least. Much like Blue Jackets Nation, we Falcons fans have waited long and patiently to turn the page.

There is a synergy with this affiliation that none of the previous three had. Yes, Columbus geographically is closer than Phoenix, Tampa Bay or Edmonton. But this time, there is something much deeper to the community spirit.

I recall during the last couple of years of the Oilers relationship that the players were, for lack of a better word, distant. Maybe because the current crop is fresh in my mind, I tend to speak more positively about them, but those last couple of Oilers years didn't seem to be as fan-friendly.

No, it's different now. Whether it's Andrew Joudrey yukking it up with Alexandre Giroux on the video board (an in-arena commercial that makes me chuckle every time I see it..."that wasn't bad, eh?") or Cam Atkinson bowling with local kids, dare I say, these guys (gulp) seem to enjoy what they're doing. 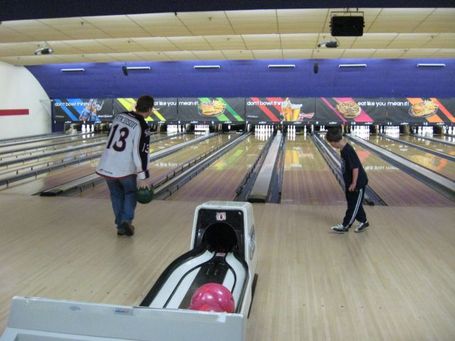 And what they're doing is spreading the word of the Springfield Falcons, and by extension the Columbus Blue Jackets throughout the greater Springfield area. If it's not in-house ads or bowling, they are out skating with junior hockey teams in the area. There are no false airs, no pretentiousness.

I can speak firsthand of these experiences. I've mentioned my soon-to-be nine year old. His little brother just turned seven, and he has turned into somewhat of a Mr. Hockey Encylopedia. He could name all 30 NHL teams when he was three. Now he can name them, the 30 AHL teams and their affiliations, is working on some ECHL teams and has a few hundred hockey cards, and a story behind each one. And did I mention that he loves the Falcons?

After a recent Sunday afternoon game there was a team poster signing event. The Falcons lost the hockey game 5-2 to the Providence Bruins, yet there they were. All of them.

Many of the fans took part in a public skate after the game. Now in his first full year of skating, my son was thrilled beyond words to be on the same sheet of ice that his heroes had been on mere moments earlier. After quite some time and the requisite "just one more" spin around the rink, we went upstairs. We didn't really know if any of the players would even still be there. And there they were...all of them. 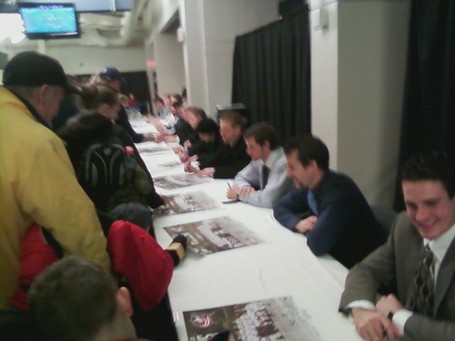 The line for autographs had worked its way down; we didn't have long to wait at all. As we made our way down the long line, starting with Mark Dekanich, each Falcon was gracious, polite and charming. Heroes all to a seven year old. They didn't have to be. They just lost a tough, tough hockey game. Yet, there they were for their fans. From Dekanich to Lebda to Calvert and St. Pierre, they might not know it, but they made an impression on a seven year old that, thanks to the autographed poster, will last a lifetime.

And so it was again this past Wednesday. Another day of practice, and another day of getting ready for the real work of meeting, greeting and helping the community. This time it was a two-fer. In the afternoon, three Falcons (Ryan Garlock, Greg Amadio and Andrew Joudrey) participated in Reading Day at an elementary school. Then, Wednesday night it was time for a "Celebrity Scoopers" event at a Friendly's Restaurant in Springfield. The "Celebrity Scoopers" were Alexandre Giroux, Cody Goloubef and pulling double duty, Ryan Garlock. The ice cream scooping event was for the benefit of the local Easter Seals chapter. 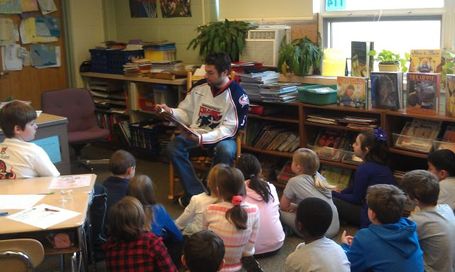 Greg Amadio with an attentive class

The one constant between hockey and ice cream are kids. In the competitive spirit of the evening, Giroux won the competition with 16 completed dishes of ice cream in the minute and a half cycle. Following the scooping event, Falcons players, team mascot Screech and the mayor of Springfield, Mr. Dominic Sarno, delivered free ice cream to everyone in attendance completing a special night for the Falcons, Friendly's and Easter Seals.

Earlier in the season, I saw John Moore on a FSO pre-game show helping out at a school in Columbus. The same John Moore who just about one year ago was taking the time (along with David Savard) to teach Springfield area kids a thing or two about stickhandling and shooting. 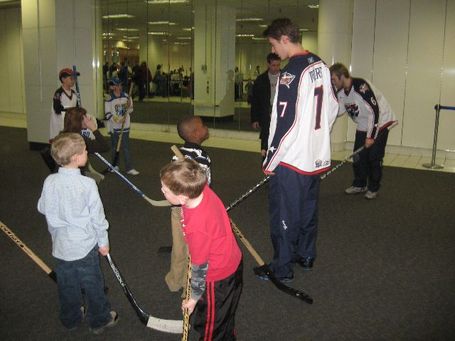 These young men aren't household names, even to the most ardent of hockey fans. Well, not yet. The guys like Moore and Savard, Calvert and Atkinson...if all goes as expected, yes they will be household names someday. But even for those who might be career AHLers, or those who have come to Springfield on a PTO, they proudly wear the Falcons sweater, both on the ice and in the classrooms...or behind the ice cream counter.

The glue that has held this club together since its inception in 1994 is President and General Manager Bruce Landon. I won't get back up on my soapbox to tell the world what a special guy Bruce is...I did that back in September. Whether directly or indirectly, he leads by example, and that example is a credit to the Springfield area.

Whether it's scooping ice cream for Easter Seals, teaching kids some hockey fundamentals, signing posters, visiting hospitals or banding together after last summer's tornadoes, the staff, management and players of the Springfield Falcons go above and beyond. While we would all like to see the Jackets and the Falcons hoisting the hardware one of these June's, rest assured that they have built a strong foundation for their eventual on-ice success: they are champions to the communities they call home.