One of the things that I enjoy the most here at The Cannon is the diversity of opinions and the respectful manner in which they are discussed. Ville A is one of our regulars. From his comments, I take away the fact that Ville is an astute hockey observer. From the small nuances of the game to things more problematic, Ville speaks his mind and does so in a thoughtful and clear manner. After a recent Falcons game, Ville asked several questions of me. I had hoped to answer these in post form on Monday, but a bout with Hurricane/Tropical Storm/Frankenstorm Sandy scuttled that. Western Massachusetts, by and large, fared well. Others have not been so lucky, and my thoughts go out to those who are still forced to deal with the storm's aftermath.

Share All sharing options for: Ville Asked, I Answered!

The Falcons are off to their best start in 14 seasons. Take a look at this screen capture: 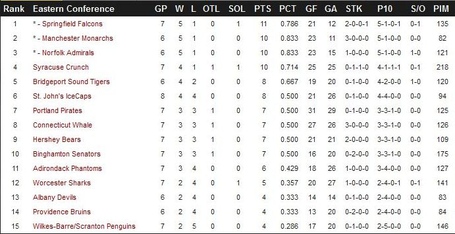 No, your eyes do not deceive you! As we enter the month of November, the Birds are alone at the top of the Eastern Conference of the AHL. OK Mr. Glass Half Empty, I am fully aware that the boys are only 7 games into a 76 game marathon. But as a lifelong Springfield hockey fan, I'm not ashamed to say, I really like the look of Springfield at the top of the standings! Take it away Ville!

Ville: What trends are you seeing with the Falcons’ so far this season?

LB: I am seeing a strong team that is built from the net out. How many times or for how long have we, as Falcons or Jackets fans, had no choice but to wonder "what if" we had been the beneficiary of some outstanding goalkeeping? Curtis McElhinney has been sensational in the early going. His calmness under fire has helped earn him two shutouts thus far. In the only game C-Mac didn't start, the ultra-capable Paul Dainton (late Thursday edit: Paul was injured at practice this week and Mike Clemente has been called up from Missouri of the ECHL) stepped in last Saturday night and did an admirable job in a shootout loss. Let's not fail to recognize that Paully D turned in a 38 save performance through 65 minutes of play and earned the game's #1 star for his efforts.

While there are players currently with the Birds who would otherwise be up top, Springfield has put together a lineup that is both deep and well rounded. The defense has been excellent so far. And when I say "excellent", I take into account that this is the AHL, not the NHL, and some mistakes are inevitable.

Ville: I would also say that there seems to be an emphasis on a fast transitioning game and involving the d in the offense as much as possible. Is that an accurate description?

LB: I think that the play of Tim Erixon and Cody Goloubef has been extremely reliable. While Erixon comes with the "can't miss" label, he's in a new environment now with Columbus and instead of being lost on Broadway, now he can be the big fish in a small pond.

Goloubef, now in his third season in Springfield, has come back from a shattered finger and the ensuing surgery which cost him quite a chunk of the season last year. The times that I have spoken to him, he is a focused, dedicated player and he works very hard at his game and quite frankly, it shows.

John Moore and David Savard, also in their third seasons, are showing more of what is expected of them by the Jackets. Namely, the ability to move the puck in Coach Larsen's "north-south" manner. Moore's considerable experience from last season has shown through clearly. He now regularly accelerates through the neutral zone, rather than coast from red to blue lines. His skating remains a viable weapon in his arsenal. This contrasts with Savard, a defender who appears to this observer to have a more natural defenseman's tendency. Savard can also move the puck along, but it appears to be more of "lugging" than "carrying". A different shade of gray, if you will. He has been caught flat footed on a few occasions here in the early going, but again the AHL that I've seen in the first few weeks of the season is about a step faster than what it usually is.

I also think that Nick Holden has had a solid start to the season. Nick was shut down in January after season ending shoulder surgery. Up to the time he was injured, he was one of the Falcons top D-men last year.

Ville: Other than C-Mac, have there been any standouts?

LB: On D, I'd give a slight nod to Erixon right now. He's shown a knack for being in the right place at the right time.

Up front (how could a post this long not have mentioned any of the forwards yet!), predictably, Ryan Johansen has been excellent. On the same line, Cam Atkinson has complemented Johansen and they have been a lot of fun to watch.

The depth of the club up front extends to Tomas Kubalik and Jonathan Audy-Marchessault. Both of them have found the back of the net early on, and in both cases, given some open ice and a little dangle room, they will be positively lethal on offense.

Let's not forget the veterans line (my personal favorite) of Cody Bass, Andrew Joudrey and Ryan Craig. So much of what these guys accomplish never makes it to the score sheet, and that's a shame. Bass showed a truckload of guts in the dying seconds of Sunday afternoon's game with Portland. With the Pirate net empty, Bass went full speed into the corner all alone, among three Portland skaters. Cody lost an edge (he could have been hit...hard to say for sure) and hit the wall at full speed. With two seconds left on the clock, he lay on the ice motionless. Attended to by the trainer and a doctor on the ice, finally he sat up. He got up with the help of Goloubef and skated toward the bench to head down the runway. Slowly energized at the bench, after withstanding a crash that would have left many stretcher-bound, Bass found enough strength to chirp at the Pirate bench. That last part was where I questioned if he purely lost an edge, or if there might have been a hit that led to the crash.

Ville: Is there any tangible evidence that the increased competition has led to players stepping up their game?

LB: I'll use Cody Goloubef as an example here. This is the guy who realistically coming into camp was maybe #5 or #6 on the defensive depth chart. He came to camp ready to play and in my opinion, hasn't looked back since. He's definitely top four at this point. Let's go one step further and say the lockout ends today and the Jackets want Moore and Erixon - just sayin'.

While that opens things up to a more regular usage of Greg Amadio and Ted Ruth, Cody G in the meantime potentially moves up to the top pair. Think he doesn't know that?

At the other end of the spectrum, there are talented guys who haven't had a sniff yet. Amadio has played in just one game, while Tim Spencer has yet to dress. These are two more well rounded, character guys who are under contract to Springfield that are having to wait their turn until the NHL resolves its issues.

Ville: Do you sense that the coaching staff is playing a system that will be similar to what coach Richards used with the Jackets last year?

LB: I absolutely believe that is the case. Long gone are the days where an AHL club exercised its authority by trying to institute its own coaching philosophy or style of play. Brad Larsen and his staff are hired by the Jackets. Scott Howson, Chris MacFarland and Bruce Landon have put together a squad whose nucleus will learn the Columbus system, because that's the system that these guys will be playing in when (not if) they make it to Columbus.

As a matter of fact, both Richards and MacFarland have spent time here in Springfield in the early part of the season. If the lockout continues, I expect them to continue to be a presence with the club. Maybe not as far as being on the ice at practice, but definitely watching and likely making suggestions to Coach Larsen based on their observations.

Ville went on to close with some forward looking comments about the hiring of John Davidson and what it could mean long term for the Jackets.

I love the hiring of JD. I guess I must be getting long in the tooth, because as a goalie follower, I've watched him his entire career (including a rehab stint right here in Springfield when they were a New York Rangers farm club!). When he transitioned into broadcasting, it was a pleasure to steal his "Oh Baby!" for commentary that I did. Initially, I was surprised to see him make the jump from broadcasting to the Blues presidency. But sometimes, that's a fan's perspective. Over the last several years, his executive abilities overshadowed his career in the booth. Having the autonomy he needs to oversee the hockey operation, the Jackets of the future - the Falcons of today, are in good hands.