Brick by Brick - John Davidson Looks to Build in Columbus

Share All sharing options for: Brick by Brick - John Davidson Looks to Build in Columbus 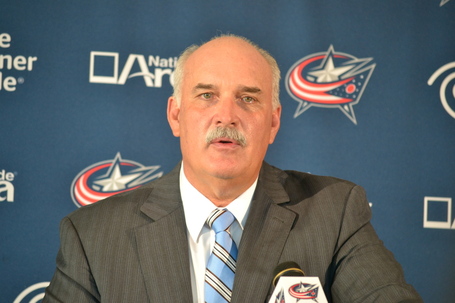 Before an invested and excited audience that included the entire Blue Jackets' coaching staff, GM Scott Howson, advisor Craig Patrick, the ownership group, and nearly the entire Columbus sports' press corps, Blue Jackets team president Mike Priest stepped to the podium and announced the hiring of a man who will likely be seen as his replacement by many fans.

That, of course, isn't entirely accurate - it would be more appropriate to call him a partner, and in fact, a partner whose presence in the organization may be the capstone of several major victories engineered by Priest this past year.

Experienced, expressive, and intelligent, John Davidson is man with a boisterous soul, and it comes across when he speaks to you, in person or as a group. He's happy to make a joke or two, he doesn't like to be called "Mr. Davidson", and he's basically like the drinking buddy / Dutch Uncle you always wanted to have. When he talks, it comes with a sense of grounding. He's seen things like this before, and he's ready to tackle them.

Things are going to be OK.

That calming certainty may get called upon quite a lot over the next year or two. Davidson is certainly optimistic about what the club has, particularly on defense, but he made a point of stressing that he wants this team to build itself up. "Brick by Brick" might just become his catchphrase here in town as he deflects questions from fans and media who want to see a winner sooner than later. I don't doubt that he thinks we have some good bricks in the mortar already - he seemed pleased with the way the team got bigger over the offseason - but I suspect he wants to see several more passes laid down before he tries to push things too hard.

Today was talking about goals - finding a home for himself and his family, getting a chance to sit down with Scott Howson, Craig Patrick, and Chris MacFarland, establishing and expanding on the club's identity, and bringing victories to Nationwide Arena.

The details will take time, but the blueprints are drawn, and the builder has arrived.

Now it's simply a matter of bricks, hard work, and time.

John Davidson Hired by the Jackets