Hunter S. Thompson once wrote about the psychology of dealing with a highway traffic cop.

As a strategy to win a hockey game, this is dangerous but sometimes workable advice. In the afternoon matinee between the Blue Jackets and Kings, Scott Arniel seems to have embraced the tactic, ending up with a team that generally allowed the Kings to come to them all day - a plan that relies on the goaltender to be razor sharp if you hope for a win.

Fortunately, Curtis Sanford was poised, polished, and perfect on the day.

Even strength stats are a mess since so much of this game was spent on special teams, but you'll at least get something of an idea.

Both teams clearly made minimizing chances a priority, and it worked. The Jackets got very lucky, but at the same time, consider how much rubber Curtis Sanford stopped, and how little of it really came from "dangerous" areas.

The problem I see is that the Jackets put so little pressure of their own out there - especially in a game where they had six power play opportunities. Even facing a stellar PK (which they did), the lack of success is confusing.

A few things stand out here: 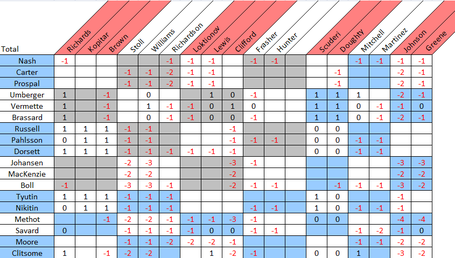 No typo in the forward fields - LA's late scratch of Dustin Penner due to back trouble left them with no time to get a replacement, so they only used 17 skaters. (11 Forwards, 6 D)