If you didn't stay up to watch the game, you had a pretty good idea that the Jackets got sunk by the second period.

Outchanced by almost double (and the only reason we got that little bit of respectability is due to a last second Carter attempt), wiped off the board in the second period, and dominated by San Jose's PP. Yep, that about sums it up. 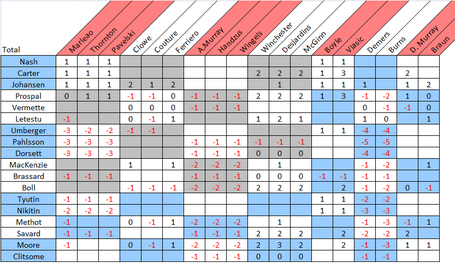 San Jose pretty clearly keyed on Rick Nash, taking him out of the game as much as possible, but what really boggles me is the total ineffectiveness of the third line against San Jose's top unit. Some of this was due to the long stretches of PK, I'm sure, but it seems like Sammy Pahlsson had another candidate for "worst game this season" at the exact wrong time.