Stacking the Jackets' last two back to back games, even in review, is a pretty thick crap sandwich. In two games, I think the Jackets perhaps scraped together 40 minutes of respectable NHL hockey, and I'm not even completely certain about that.

The numbers, as you'd expect, are not pretty.

So, let's start with Nashville. Unsurprisingly, the Jackets didn't get many chances - in fact, they only registered 9 scoring chances in the entire game, and 7 of them came in the second period.

I give them credit: The D actually seemed to work hard to limit the Preds, only allowing 16 scoring chances against Steve Mason, 12 at even strength and 4 while on the PK. But the lack of offensive firepower and a 50% rate on the PK is not going to win games in any league. 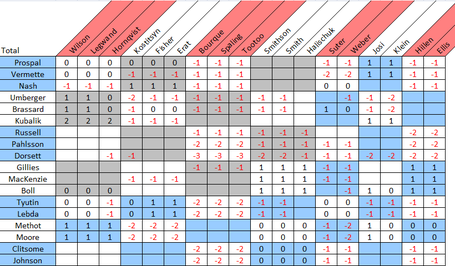 Then, there are games like Tampa Bay, where the Jackets seemed to do everything right, on paper, but it would be the goaltending and special teams that failed them...and mostly the goaltending, at that.

You are not getting a more dominant performance by Derek Dorsett this season. The only thing he didn't do was score, and it wasn't for lack of trying. Frustrating to see it so wasted. 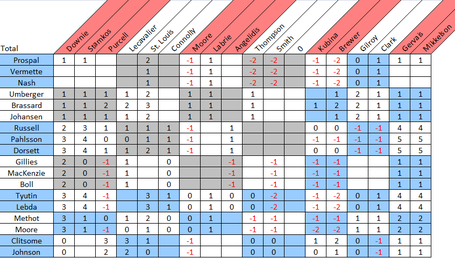 The blank value is because Tampa only dressed 11 forwards, and their 7th d-man, Oberg, only played 1:21 and had no scoring chances for or against.