As promised, here's a nice wrap up of the scoring chances from the Thursday night home game and last night in Detroit.

Something that I have to admit surprised me from both games was how low the scoring chances for the opponents were in both games. The Jackets were badly outshot in Detroit, and didn't look so great vs. Nashville either, but kept both teams around a dozen chances for the entire game.

If this lasts for a few more games, I think we may finally be seeing the Jackets' defense do a solid job of protecting the dangerous areas and forcing opponents to take shots from bad areas of the ice, reducing the workload on their goaltender.

Of course, this also assumes the team can get their defense back to full health some day...and perhaps get the offense rolling again.

Was some of that third period outburst due to score effects? Almost certainly, but it's worth pointing out that the Jackets were pretty consistently getting the puck in on Rinne from where they needed to be.

Head To Head vs. Nashville: 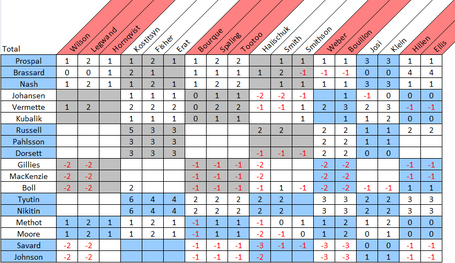 All in all, a surprisingly strong performance from the top line all night, and our third line also turned in some good work.

Honest opinion: Keep an eye on Derick Brassard the next few games. I'm betting he breaks out for a goal or two.

Now, on to Detroit:

Unlike the game against Nashville, the Jackets had an excellent first period and then slowly let the Wings back in. I'm sure the deflating feeling of seeing Detroit score on some of their earliest chances of the game didn't help with that, but it's still a credit to the team for minimizing the Wings' opportunities, particularly in the third period and OT.

Still going to point out that the power play didn't generate any chances at all during the Zetterberg major, though. One real chance there might have changed the entire complexion of this match. 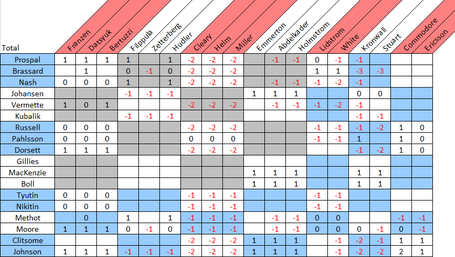 Not quite as good of a performance by the top line, but put a lot of that down to more matching and the lack of last change.