As I've noted, it's a lot more fun to do these when the Jackets are walking away with a win.

It also doesn't hurt when the Jackets do a good job of limiting the chances - after a first period that was completely dominated by the Oilers, the home team pulled even in the second period, and locked down in the third.

The Oilers clearly had no shortage of opportunities, and the Jackets generally let them by while looking for chances of their own. It's one of the first times we've seen the team play well in a "wide open" game this season. Perhaps it will bode well going forward. 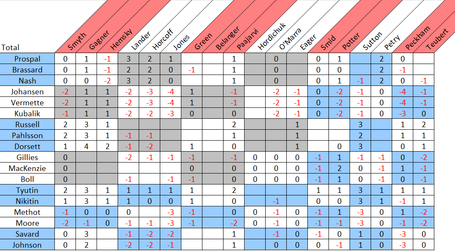