Share All sharing options for: Shooting Percentage and PDO: The Picture Stinks

Recently, the stats wizards at Behind The Net (who now also cover the Jets as Arctic Ice Hockey) began producing tools to help teams' 5 on 5 shot levels vs. goals and PDO performance for a given season.

I decided to look at the Jackets, and it really isn't pretty. 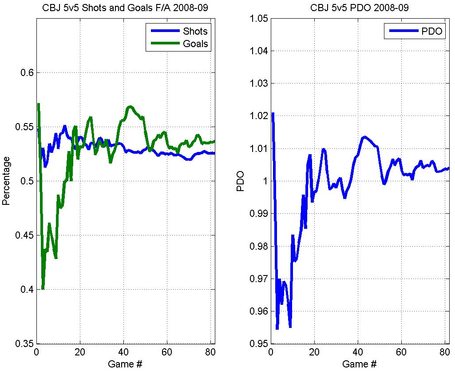 Shots and goals is pretty self-explanatory, but PDO, in case you need a refresher, is measured by the team's shooting percentage plus save percentage. The most important thing for the Jackets, in my mind, was that the playoff squad consistently showed a higher goal scoring ability vs. shot levels through most of the season, particularly in the final 20 games (ie: the playoff push).

How important is it? Well, let's look at last season: 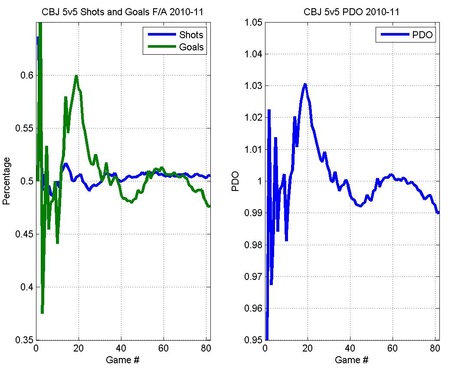 Not only did the team's PDO drop sharply (meaning they weren't getting solid goaltending or scoring), but you can see the team's scoring had long droughts beginning midway through the season that they never really recovered from, particularly compared to the spike from about 15 games in until ~30 games in that had helped to put them in a playoff position for much of the early season.

Now, what about this year to date? 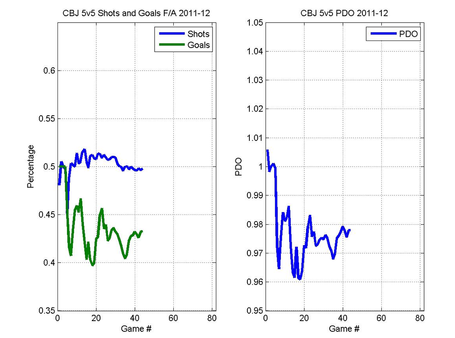 We've talked before about the Jackets underperforming this season, but this is probably the clearest visual representation you could ask for. Not only has goaltending been below average, the team's scoring ability is a record low. Perhaps it's finishing skills, perhaps it's coaching questions, but regardless, it's pretty clear that as much as we bemoan the state of our netminders, there are plenty of problems up front.

I don't think better scoring would have necessarily saved the season, but at the least a closer approach to the mean might have made this team more competitive (not to mention fun to watch.)