After a game right out of the Wild, Wild, West, the second half of the back to back vs. San Jose was a much tighter affair, with heavier checking and a surprising tendency by the Sharks to slip into the trap at times.

Unsurprisingly, chances were much more limited, and Columbus' tendency to spend so much time on the PK really cut into their efforts.

Was Columbus playing better? Absolutely. Did they get enough chances to really put pressure on Thomas Greiss? No, I don't think they did, but that's also partly their own fault.

These numbers are deceiving, though. San Jose didn't threaten the Jackets at even strength nearly as much as they did on the PP....

If there's an area I'm dissatisfied with Todd Richards in, it's the fact that he let the team fold up with three minutes to go - particularly the decision to wait on pulling Curtis Sanford until well into the final minute. If the Jackets had gone with the extra skater with two minutes, or even 90 seconds left...well, who knows?

At even strength, Columbus did an excellent job of managing this game. The major problem came with the PK, and a willingness to play for OT in the last 5 minutes instead of playing for a win. 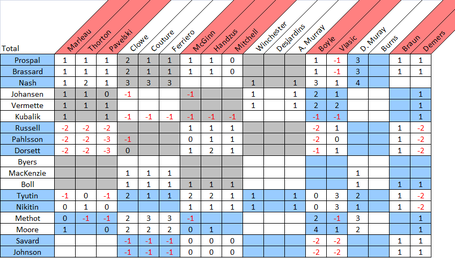