Today in the "A": Falcons Unveil Calder Cup Sweater

Share All sharing options for: Today in the "A": Falcons Unveil Calder Cup Sweater

The Springfield Falcons have released the final design of the club's special Calder Cup jerseys that the team will wear on three special nights during the upcoming season. 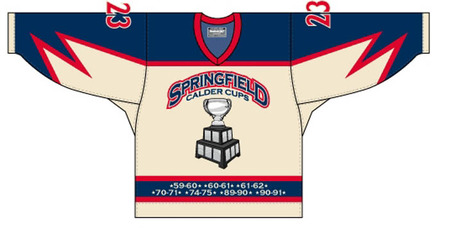 The first of the three will be for the home opener on October 15th when the Falcons host the Providence Bruins. It is the first of three Calder Cup nights that will take place this season. The opening night honorees will be the championship teams from 1989-90 and 1990-91. What made those victories so compelling was that the wins came with two different NHL affiliates. The '89-'90 Indians were affilated with the New York Islanders. The following season the Tribe was the farm club of the Hartford Whalers.

The two other Calder Cup nights in Springfield this season will be on Saturday December 3rd when the Falcons take on the Connecticut Whale. The guests of honor on December 3rd will be the Calder Cup championship teams of 1970-71 and 1974-75.

The third and final Calder Cup night will be held on Saturday February 4, 2012 when the Norfolk Admirals provide the opposition. The Falcons will salute the only back-to-back-to-back Calder Cup champions in AHL history, the 1959-60, '60-'61 and '61-62 editions of the Springfield Indians.

"The history of hockey in Springfield runs very deep and we are excited to be honoring former championship teams this season," said Falcons President and General Manager Bruce Landon. "The special jerseys tie all of the past championship teams together and this is a great opportunity to remember many of the great teams and players who have been part of the Springfield hockey tradition."

It is expected that the commemorative sweaters will be part of a charity auction, possibly as soon as the February 4th game. More information will be here on The Cannon as soon as its available.