Today in the "A": Old Barns

Share All sharing options for: Today in the "A": Old Barns

Apparently I am much older than I feel. There seemed to be an emphasis on "old" in reference to a pair of articles recently featured on the AHL website.

After all, I've been to some old, and in many cases no longer existent arenas and stadiums.

In no particular order, Yankee Stadium (yes after the 1974 renovation, but still "The House that Ruth Built"), Shea Stadium, Fenway Park, Exhibition Stadium (Toronto) and Schaefer Stadium (predecessor to the Patriots' Gillette Stadium).

There's no reason to add any of the superstructures of the last 10-20 years or so. The concrete, steel and brick facilities complete with their high definition video boards. No, today it's all about "old school". 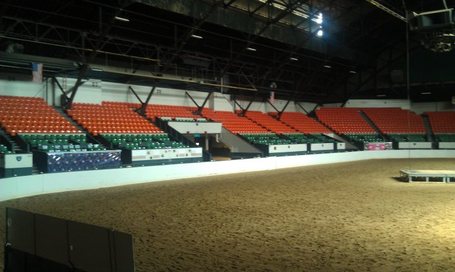 
Over the years, there have been some buildings in the AHL that quite frankly, really were old barns.

It always seemed the I-90 stretch through New York was a goldmine for them. Syracuse, Utica, Binghamton and Rochester. This is not to say that there was anything wrong with them. Old Barn is really a term of endearment for these shrines of yesteryear.

As August drew to a close, the AHL website linked to two stories about old barns that to me were every bit as iconic as the players who skated through them on their way to the NHL.

First, the Hersheypark Arena in Hershey, PA is celebrating its 75th anniversary. Despite its age, this was a building that Milton Hershey built that was far ahead of its time.

Second, the Big E (Eastern States) Coliseum in West Springfield, MA. The long time home of the Springfield Indians and Kings. To have seen hockey played here, to have skated on the ice was a genuine thrill. The Springfield Hockey Heritage Society hosted a members meeting at the old barn two weeks ago.

A testament to the enduring legacy of hockey here in Springfield, the day saw nearly 70 people gather in a place that hasn't had a sheet of ice in it for about 20 years. (The ice plant was removed at that time) 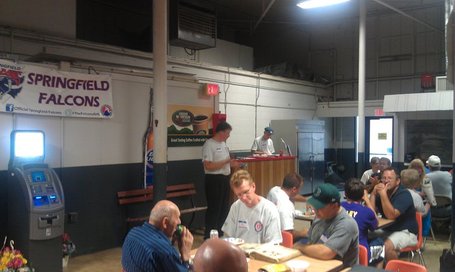 Your author about to address the crowd
Photo: Damon Markiewicz/Springfield Falcons
Used with permission.


Think of it as "Cannonfest East". Except without bar food and adult beverages. Just old time hockey. And present day hockey also, as Bob Oliver addressed the group, paying respect to the past but also speaking highly of the Columbus Blue Jackets and the effort they have made this summer to build a winning club not just in Columbus, but also in Springfield.

With the articles written about hockey the way it used to be, perhaps I can conclude that what's old is new again.