The Connecticut Whale scored the first goal of the night just 26 seconds into Wednesday night's home pre-season opener for the Springfield Falcons.

Make no mistake, the Springfield Falcons from that contest will bear little, if any, resemblance to the squad that will be on the ice after the start of the American Hockey League regular season.

Wednesday morning marked just the fourth practice together for the Falcons. In contrast, six of the Whale players in the lineup were on the New York Rangers team in the recent Traverse City tournament. The Whale had also played the night before (a 3-1 loss against the Albany Devils). 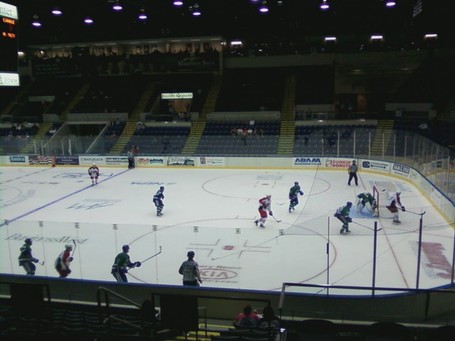 The view from Section 6

The Falcons dug themselves into a 4-0 hole after two periods.

Last season's American International College captain, Tom Mele, got the Falcons on the board 41 seconds into the third period. As the night progressed, Mele's confidence appeared to increase with every shift. Once he gets a season or two of the pro game, he looks like the kind of player who could become a high slot sniper.

Later in the third period, at the 9:31 mark, Chris Chappell of Connecticut was sent to the box for hooking. He easily could have gotten another two for feeding his stick blade to one of the Falcons along the boards, but referee Ryan Hersey stuck with his original minor.

Thirteen seconds into the power play, Wade MacLeod lit the lamp for the Falcons. Inside the Whale zone, Phil Ginand passed back to Dalton Prout on the point. Prout blasted a shot that MacLeod tipped in to bring the Falcons within a pair.

Cutting the deficit in half energized the Falcons, and they played a strong final half of the third period.

The two goaltenders who came on in relief, Jerry Kuhn for the Whale and Brian Mahoney-Wilson for Springfield both made some quality stops in the final period.

Despite pulling Mahoney-Wilson and a last minute power play, the Falcons came up short by the final score of 4-2.

The next game for the Falcons is tomorrow night, a "neutral site" game against the Providence Bruins in Marlborough, MA. The Falcons wrap up the pre-season back on their home ice on Saturday night when the Bruins come to Springfield.

Adam Pineault wore the "C" for the Falcons.

Dalton Prout had a solid game on D.