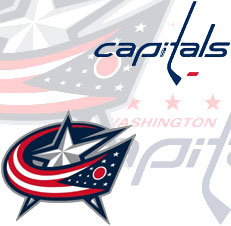 Here's your game thread for tonight's matchup - remember that tonight's game will not be televised or streamed by the Jackets (unless the Capitals end up offering a shared stream similar to the Minnesota game, but at this point we've had no indication of that happening). That means you can listen to George and Bob online at Bluejackets.com or by tuning in to 1460.
Last night, the Jackets' busted Buffalo's 4-0 win streak. Tonight, they have a chance to deny Washington their first win of the year.
For the heck of it, I decided to see if Sanford had faced Washington before during his career with St. Louis, Montreal, or Vancouver. It turns out he's only seen them twice - once as a starter (OTL) and once in relief. He's 0-0-1 with a 2.82 GAA and a .900 save percentage.
Past that, the guys to watch will be the younger set, as we mentioned in the preview, but keep an eye on David Savard and Ryan Johansen, who are playing on back to back nights. It'll be interesting to see how they respond to that demand.
Go Jackets!