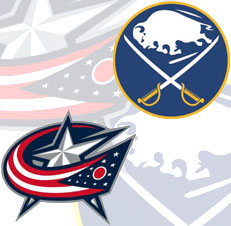 If there's a team to be scared of in the pre-season, it might just be the Buffalo Sabres. Inspired by their new additions, the big bankroll, and the "Cup or Bust" attitude of Terry Pegula, they've not only gone on a 4-0 tear through the pre-season, they've had an almost unstoppable power play that has been shredding every opponent they've faced. (Admittedly, they've only faced Montreal, Carolina, and a doubleheader in Toronto, but still.) Averaging 3 goals a game, offense is clearly not an issue for this squad.
With Ryan Miller likely to take the net for the Sabres, the Jackets will need to get traffic in front early and often to take him off his game and attempt to get their own scoring rolling.

Reports from the pre-game skate indicate that R.J. Umberger and Derick Brassard will be used as wingers for Ryan Johansen, Alexandre Giroux will get a shot next to Carter and Nash, and the boys in Union Blue will have Steve Mason in net with Allen York backing him up - rather interesting, given that York started against the Wild.

It's 100% pure balls, but could Scott Howson seriously be considering running a duo of Steve Mason and Allen York while Mark Dekanich heals, and letting Paul Dainton mentor under Curtis Sanford in Springfield? It's not quite as crazy as it sounds - consider that if Dex can be healthy by, say, October 23rd, the Jackets will only play two back to back matchups in that time.

If they feel confident enough in Mason, and if York shows he's ready, perhaps this would be a great way to help develop Dainton a bit more before he'll need to be sent down to Chicago, and once Dex is ready he can step back in and let York go back to Springfield for a chance at more regular starts.

A little bit of bad news: Aaron Portzline is reporting Matt Calvert has a "tender" groin (Ladies...) and is not practicing with the main group for now.

A little bit of good news: Tomas Kubalik is skating and could be back in action by mid-week if all continues to go well.

Would you feel comfortable with Allen York as the Blue Jackets' backup for the first month of the season?