After yesterday's enthusiastic start of camp, it wasn't surprising to see another large turnout for Sunday morning, particularly with the exciting draw of the team's 2011 Owner's Tournament.

One of the first signs of yesterday's practice came from goaltender mark Dekanich, who replaced the damaged red cage from his mask with a new white cage.

With the stands well into standing room only in the Ice Haus before the teams came out for warmups, both sides made an effort to put on a show for the crowd, including an early Jeff Carter breakaway, and Rick Nash bulldozing his way through Radek Martinek and Grant Clitsome, but the goaltenders looked solid in the first few minutes, with both Dex and Curtis Sanford making a few good early saves.

As the first period continued, however, Team Pizzutti began taking more and more control, thanks to a surprising contributor - Kris Russell. Playing with very confident look to his stride, he seemed to really show more control in this game, making some excellent plays and contributing a goal and two assists on the way to a 4-1 Team Pizzutti win.

Despite the score, there were some nice plays by Team Mac, including a great goal by Jeff Carter, but their issue seemed to be a difficulty in setting up and producing a sustained offensive effort, while Team Pizzutti was able to produce several sustained cycles, plus occasionally using their speed as a disruptive advantage.

We'll have full video highlights from the game shortly, but there was one issue - though the format of 2 20 minute periods gave fans a great taste of hockey, it lead to an issue for any fans who wanted to try to see all four games. Because of a break to resurface the ice between periods, anyone who wanted to see the next game on the main ice, between Team Wolfe and Team Crane, had to leave before the McConnell / Pizzutti match finished.

This would be compounded by the scheduling of the "consolation" game and championship within 15 minutes of each other, forcing most fans to choose between one and the other (and I knew several fans who decided not to attend any games on the main ice, for fear of losing their spot for the championship).

If I could offer a suggestion / critique to the club for next season, it would to be revise this scheduling, perhaps switching to a single 30 minute period for each game, and spacing out the starts to allow fans to enjoy everything without having to pick and choose when half the purpose of these type of events is to showcase players to the fans.

In the Team Crane vs. Team Wolfe matchup, Cam Atkinson made an early impact with a great individual effort to score against Allen York on a breakaway, but the most interesting play of the game came when Cody Bass was whistled for a nasty hook, one of only two penalties called the entire tournament, placing Team Wolfe on the power play.

Though the "top line" of Antoine Vermette, R.J. Umberger, and Matt Calvert generated some scoring chances, it would be Jackets' prospect Boone Jenner who popped in a nice power play goal, getting down low around the crease and redirecting a shot from Steven Delisle for the 2-0 lead.

When the rosters were announced, many wondered if Team Crane would be able to compete against the other teams because of their relatively weak forward group vs. their robust blueline. As if in response to that concern, Fedor Tyutin would cut the score to 2-1 before the end of the first period, but Crane would be unable to get back on the board before the end of the period, and in the second period, the lack of offense became acute as Derek Dorsett increased the Team Wolfe lead to 3-1 with a nice tap in past York, and as time wound down, Team Crane coach Dan Hinote (notable for being the only head coach to go with a full dress suit for the occasion, compared to the normal warmup outfit used for on-ice workouts) pulled his goaltender in an attempt to get back into the game, but Antoine Vermette would bury the dagger, putting Team Wolfe into the championship.

In the Consolation game, however, Team Crane's strategy seemed to be paying off when Aaron Johnson scored early and the Team Crane defense locked down hard for the rest of the first period, taking a 1-0 lead into their halftime, but the second frame would belong to Team McConnell - and in particular Ryan Johansen, who stepped into becoming Team McConnell's top center when Jeff Carter was shut down for the consolation game after blocking a Rick Nash slapshot earlier in the day. (Coach Arniel, when asked about Carter's condition, said that he had "swelled up pretty good" and would be evaluated on Monday, but didn't appear concerned. Hopefully it is indeed minor, and he'll be good to go for the remainder of camp.)

Working as part of a line with Adam Payerl and Peter Straka in the second half, the Johan set up Payerl for an early second period goal, then Tomas Kubalik took a nasty shot in close that at first appeared to have been saved before the crowd realized it had trickled past York's shoulder and into the net. Less than a minute and a half later, Team McConnell extended their lead when Johansen set up Alexandre Giroux as he drove to the net, and Johansen would put an exclamation point on the win in the dying minutes with a beautiful top shelf wrister.

In the championship match, I came in late due to the consolation game, so watch for Dan's take soon. What I can tell you is that scoring started early, with Kris Russell again making a big impact for Team Pizzutti by opening the scoring two minutes into the game, and then set up Maksim Mayorov later in the period for the 2-0 lead.

Team Wolfe would answer back, however, with Michael Chaput getting them on the board and Aaron Bogosian tying the game (with Chaput grabbing an assist) shortly before halftime.

Both Steve Mason and Mark Dekanich looked sharp in the second half, making some strong saves against their opponents, but Matt Calvert would spring Chaput on a breakaway late in the period, and the crowd went wild as Team Wolfe took the 3-2 lead.

With time running down, team Pizzutti coach Todd Richards decided to pull Mark Dekanich for the extra attacker, but Derek Dorsett would hustle back after Team Wolfe cleared the zone and scored his second goal of the tournament into an empty net. After winning the ensuing faceoff, Team Pizzutti would go for the extra attacker again, but they would be frustrated by Team Wolfe forcing the puck back into their zone quickly, and Boone Jenner forcing a turnover as they attempted to break back out and dropping a lazy shot from just inside the blue line into the empty net for a 5-2 win.

[edit] Dan here... to follow up on Matt's recap, there were clearly a few guys who looked like they've received their message this off-season: a job is there for you to take, but it's not guaranteed. In addition to Kris Russell, who looked like the player we all hope he can be in the championship game, Maksim Mayorov was skating like a madman, and I noticed him around the puck a lot when he was on the ice. Coach Arniel deemed Mayorov's work: "real strong." As for Russell, his coach gave him a great review: "I thought Kris was one of the best defensemen out there. I thought he had a real good day. He had all the injuries that he did last year, he didn't even make it through the [Owner's] Tournament last year and got off to a slow start. Hopefully he can stay healthy. His ankle seems to be OK. When he skates like does, and he makes it difficult for people to try to catch him like that, he's another weapon on the back-end."

Likewise, Michael Chaput is making a hard push to end up in Springfield, as opposed to being sent back to The Q (Lewiston). He sneaks in under the "YOU MUST BE 19 TO RIDE THIS RIDE!!" wire, and the 2010 third round pick of the Flyers was a beast today. He scored two and had an assist. His first goal got Team Wolfe on the board while down 2-0 in the first half, and his break-away wrist shot that beat Dekanich to the blocker side was positively smoked. It was technically the game-winner. Chaput is going to be a guy that forces his way into the center discussion in a few years, and with a continued good camp he may have a shot at the AHL this year. If he goes back to Lewiston, look for him to destroy The Q this year.

I also feel it's necessary to give Steve Mason some love. Mase, of course, was the goalie for Team Wolfe, and he certainly earned it down the stretch. He made two stunning stops on his high glove side late in crunch time when the game was either tied or his team was up just one. One of those saves came off the stick of Rick Nash, who was literally point-blank in front of the crease and snapped a wicked, high wrister that Mase gloved. It happened so fast that the crowd was almost stunned and you could head the sound of the puck hitting the mitt. "He was very solid out there today," coach Arniel said. "I thought that he made some big stops when he was one-on-one with the shooter. He also did some real good things with traffic. I thought he did some good things on his rebound control. A real good first step. I don't want to sit here and every game critique Steve's play, because it's going to be a long year. To get him into the finals, him against Dekanich, I thought it was a real good matchup."

The championship game saw the *other* penalty (Samuel Pahlsson on a blatant trip of Boone Jenner), which gave Team Wolfe some PP time. Despite a Jared Boll break-away (yes, you read that right), it was great to see Wisniewski work the point. His shot is booming, and his coach loves to see it from both he and Martinek: "Not just the Power Play. One thing about Wiz: he's not afraid to fire that thing," Arniel said. "Martinek fires that thing as well from the top. That's what Wiz does. He gets all those assists because of that shot that he gets through. Not too many people want to step in front of it. It comes in so hot that goalies [give up] that rebound that's sitting out front. That's what you're trying to create when you have a shot like that. We've been looking for that; hopefully he can deliver." 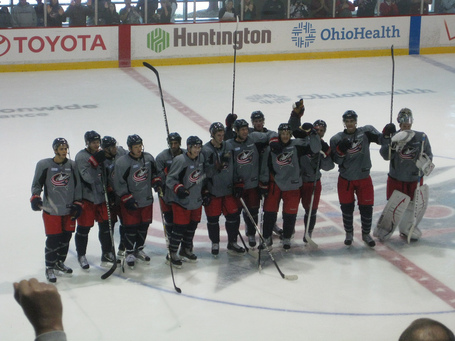 A few other notes from today's tournament and talking to some of the players:

All things considered, even with the slight scare on Carter, this was another great day to start the season, and did an excellent job of getting the fans involved and excited. The team seems loose, comfortable, and there is again that sense of confidence. Today's games were a nice way to have some fun, get everyone's blood pumping, and bring rookies and vets alike up to speed.

With one more day of practice before the exhibition season opens, the Blue Jackets can't wait to get started, and after today, the fanbase is right there with them.