Today in the "A": Falcons Wrap Up Busy Week

Share All sharing options for: Today in the "A": Falcons Wrap Up Busy Week

The Springfield Falcons wrapped up a busy week by announcing the club's training camp schedule and the installation of the sheet of ice at the MassMutual Center.

Training Camp will get underway at the home of the Birds on Sunday, September 25th with the players hitting the ice at 11:00AM. The pace of life in the American Hockey League will become evident quickly, as the team will have just four practices before hitting the ice for the first of three pre-season games on Wednesday, September 28th when the Connecticut Whale provide the opposition. Fans of the rivalry with the Whale will see the clubs meet another twelve times once the regular season gets underway on October 7th.

Training Camp will wrap up with three more practices and two more exhibition games before coach Rob Riley and staff sort things out for the regular season. 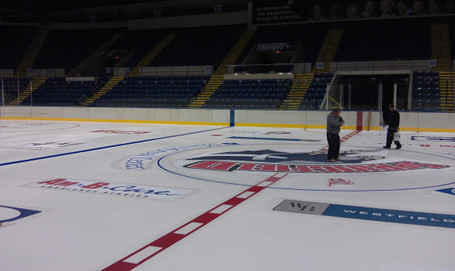 Inside the arena, perhaps the best news of the week: The lines and logos were finished on Friday at the MassMutual Center!

It won't be long now!

As Bruce Landon said this week, "There's hockey in the air!"