Today in the "A": In Our Backyard?

Share All sharing options for: Today in the "A": In Our Backyard?

While I was digging for some American Hockey League material, I found this:

ALBANY, N.Y. – The Portland Pirates will host the Albany Devils for a neutral-site preseason contest at the Olympia Ice Center in West Springfield, Mass. on Friday, Sept. 30 at 7:30 p.m. General admission tickets can be purchased at the facility for $5 on the day of the game.

The Devils will be the visiting team for the pre-season match at the Olympia Ice Center, which is located at 125 Capital Drive, West Springfield, MA.

To say the least, I found this rather strange.

The Olympia rink where the game is scheduled is primarily a youth and high school rink, located less than five miles from the home of the Falcons, the MassMutual Center in Springfield. 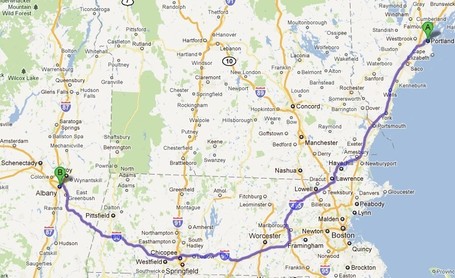 The map above shows the 272 miles between Portland, ME and Albany, NY. Springfield is at the bottom of the map, along I-91. The Olympia is located between the two circles that represent Springfield and Chicopee.

Although it's "only" a pre-season game, I couldn't say why this site makes sense for the game.

Stranger yet, the above info was gleaned from the Albany Devils (visitors) website. The Portland Pirates (home) website, as of this moment, makes no mention of the game at all.