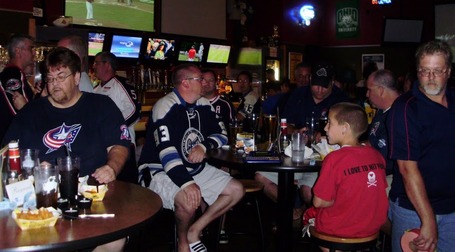 Photo Credit to Gallos from DBJ
As the joke / story goes, in the middle of last summer, I emailed some of the other Blue Jackets bloggers to say "Hey, want to have a cookout?" I figured it'd be nice to get to know people better. The more responses we got for people interested in coming out to talk hockey, I quickly realized my backyard was big, but it wasn't -that- big.
Cue Greg May, the man behind Full Mental Jackets offering us the use of his place. Cue Tom, the man behind Dark Blue Jacket coming up with the name "Cannonfest" and unleashing a stream of neat, funny, entertaining images and promotions that we slowly spread around until we created a fun get together last summer.
Not surprisingly, a lot of people wondered when we'd be doing it again, and after a lot of back and forth battles with jobs, life, families, and all of the 10,000 little things that come up during a year, we finally had a chance to say, Yeah, I think we should do this again.
What happened this year well and truly has blown me away.

First off, a hearty thank you to the Blue Jackets organization, as Todd Sharrock, Larry Hoepfner, and Ryan Holtmann all took time out of their weekend to attend - and to have an informal sit down with a big chunk of the blogging community to ask what they can do to help the fans as we write, tweet, video, and promote the team.

We also learned about some interesting and exciting developments coming for next season - including the fact that the Jackets are continuing to develop their presence in the social media world (something that they've been doing an increasingly strong job of over the past year and a half), including creating a new Digital Media / Marketing department which will have a focus on Social Media, including Facebook and Twitter, and streamlining the team's presence while offering up more content and resources to fans.

The team is also working on adding their own "community" section to the Bluejackets.com website. Todd pointed out Calgary's "C of Red" Fan Zone as a good example of what they are working on, giving the fans a chance to interact directly and potentially having items promoted on the main site as well.

The team is also working with Fox Sports to hopefully offer a "more consistent" alternative for Jackets' fans in Cleveland and Cincinnati looking for games when there are conflicts with other major sports, and they seemed hopeful about having a better direction soon (though they also pointed out that this is dictated as much by local cable carriers as Fox Sports, so I'd suggest taking the time to call your local cable company today!) 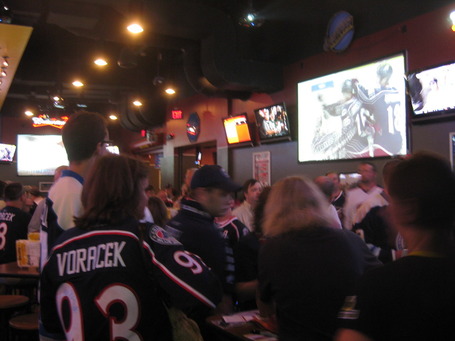 Then it was time for the event itself, and the turnout from all of you was nothing short of amazing! Having filled the bar area at the Grandview BW3 before the event even started, the party "spilled out" into the main body of the restaurant!

This was the best part, because it allowed for a constant flow of conversation as fans circulated through the entire space, finding friends, running into people they might have recognized from games, and occasionally getting a chance to say hello to those known only from print bylines or radio voiceovers. Everyone I had a chance to talk to was interested in spending a few minutes chatting about the team and their hopes for the upcoming season, and I'm just sorry I didn't get the chance to spent time with every single person.

I have to say one of the most fascinating parts of the day for me was getting to a table to say hello (and happy birthday!) to Larry Hoepfner just as one fan gave him some gentle ribbing about the team not sending Boomer out to make an appearance, and hearing Larry's explanation.

"Boomer", he said with great dignity, "was for the kids. He was designed with kids in mind from beginning to end because a lot of kids who go to the games, or are taken to the games by parents, get scared of the cannon. We wanted to find a way to soften the cannon for the kids and make it something friendly - something they could see at school or on trips and feel more comfortable with."

When you look at it that way, it makes total sense, and you can see why the potential pitfalls from adult eyes never came into consideration. I was also interested to hear that Larry hoped that someday Boomer might return, once people were a bit more receptive to the idea.

"Besides", he said, "If we'd made a big cannonball for a mascot, we'd probably have gotten ripped for that, too."

Larry and I also discussed the impact of the team's third jersey - Jerseys from every era of the franchise (and some wonderful examples of Springfield, Syracuse, Portland, and even the Russian National Team) were represented, but the "new" thirds are clearly a huge hit, and appeared on a great deal of the crowd. It's amazing to see how it's taken off inside of the fanbase in just under 9 months since it was introduced.

Another highlight, as last year, was Skraut debuting a new video - in fact, he actually produced two.

After that, to the delight of the crowd, came his second offering: Call To Arms.

It's a hard choice of which one is better - both have their merits, but I think Kickstart is just a little more in my mood for this upcoming season. I look forward to watching this team tearing up the ice at breakneck speeds! 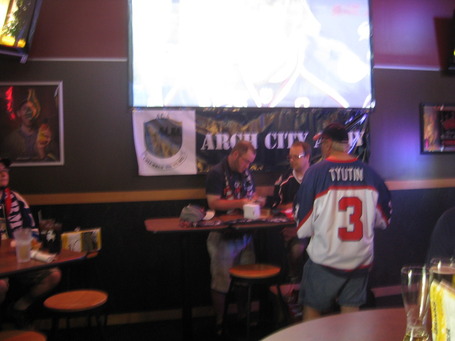 Another big piece of the afternoon came in the form of the Jacket Backers and Arch City Army, who were signing up members and helping get fans ready for the season. Both groups were also promoting future road trips this season, and the Jacket Backers also helped out by running a raffle to benefit Hockey Beats Down that raised one thousand dollars to help in the fight against cancer. $1000 raised for a good cause in under 2 hours.

I truly believe that hockey fans are some of the best fans in the world, and this show of generosity is one of the many reasons why.

I will also say that despite my skepticism towards the ACA in their early appearances, I was very impressed with their plans for this upcoming season, and the clear passion they have for the Jackets. I'm looking forward to seeing what they'll have in store for Nationwide Arena this fall.

The entire event was an incredible success on any level you can name, and I hope that if you attended, you had an amazing time. As I said this morning, this was all because of you, the fans, and the amazing and exciting community that has grown up around this team.

Cannonfest is the result of one fan's idea, fanned into something bigger and more amazing than I ever expected because of your help. I am in awe, and I am in your collective debt.