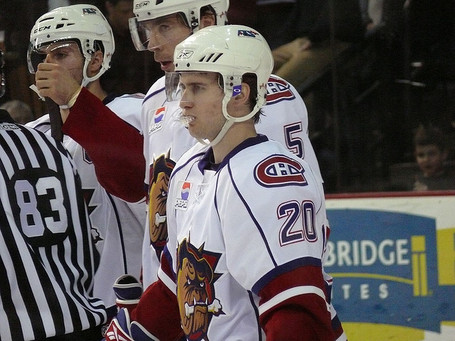 In a move to add some more depth up the middle, the Jackets are working on completing a trade with Montreal, sending Mike Blunden up to the Habs in exchange for Center Ryan Russell, twin brother of Jackets' defenseman Kris Russell. Per Aaron Portzline, this deal is contingent on Blunden passing a physical in Montreal.

Though this move does, in theory, add another forward to the competition for Columbus' bottom six, it seems like a deal set up primarily to provide another proven forward for Springfield (Russell has been a solid, if not remarkable, forward for the Hamilton Bulldogs). Though undersized, he's regarded as a great offensive threat and an excellent skater, but was regarded as having taken a bit of a step back in the past season in Hamilton. Perhaps most impressively, should the Falcons find their way into the AHL post-season, Ryan is / was Hamilton's all time playoff goal scoring leader and their single season SHG leader, showing that he can turn up his game at the right times.

All things considered, Blunden, like Russell, seemed to have plateaued in Columbus' system, and needed a change. This gives both players a fresh start, and though I don't expect to see Ryan Russell make the Jackets out of camp, he provides more options down the middle in case of injury. Another solid move by Scott Howson to help make the Jackets' system as a whole a bit stronger and a bit deeper at a reasonable cost.