Share All sharing options for: The Cannon Interviews...Chef Ed Kowalski 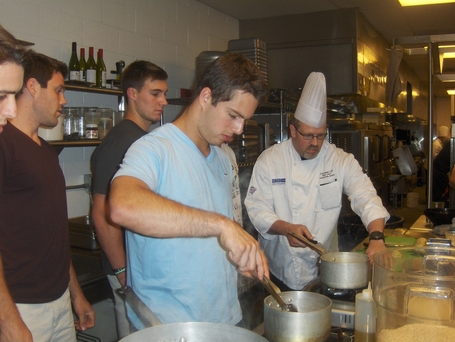 Chef Ed Kowalski, one of the chefs working for the Delaware North Company at Nationwide Arena, is a die hard hockey fan and loves the Blue Jackets, but most Jackets' fans probably weren't familiar with him until he taught a cooking and nutrition class to the Blue Jackets' prospects at this season's prospect camp.

We reached out to Chef Ed, and he was good enough to answer a few questions for us on how he got started cooking, the camp, and some of his plans for working with the team on their nutritional needs in the future.

Can you give our readers a bit of your background in Cooking / Nutrition?

I have always had a fascination (some might call it an obsession) with food and with cooking, which I attribute to my grandmother. I took my first kitchen job in 1983, shortly after high school, at a steakhouse in a suburban shopping mall and have been cooking ever since!

In the early days of my career, nutrition was not a big issue for consumers, unless it was doctor-ordered. So as the culinary landscape has evolved, so, too, has my role as a chef. I have to be able to respond to guests with allergies or special dietary concerns, and guests are more tuned into what is and is not good for them. My priority at Nationwide Arena is to ensure that each of our guests has a special experience, so if that means creating a gluten-free or low-fat dish, that's what I do! Additionally, all of the chefs at Nationwide Arena are registered with First Lady Michelle Obama's "Chefs Move to Schools" program, and we have done some work with the local Children's Hunger Alliance. The biggest missing piece in our nation's efforts on nutrition is education.

Could you describe how you got involved with the cooking class at prospect camp, and what you  worked on with the prospects?

This was really a collaborative effort with the Blue Jackets. We met with Strength and Conditioning Coach Kevin Collins, came up with a plan and a menu based on the things the coaching staff wanted the prospects to learn, and put that plan into action. We gave them a brief presentation on basic food and knife safety, and then broke the group into three smaller groups to provide better hands-on attention. Executive Chef Joe Ditri worked with a group of five, teaching them the basics of grilling and pan-searing chicken and fish. Meanwhile, Chef de Cuisine John DiGiovanni instructed another group in making salads, including vinaigrette dressings from scratch, while I worked with a third group on cooking starches, specifically healthier grains such as brown rice and quinoa. After 20-25 minutes at each station, the groups rotated, so everyone got a chance to do everything. Afterwards, the players actually got to eat what they cooked! We dined with them, answering questions and providing feedback

The idea is to give these young men, many of whom have never cooked for themselves, the basic tools to create a healthy meal that tastes good, instead of going out to eat every night. It's a tired cliché, to be sure, but true nonetheless: "You are what you eat." This is especially dangerous if you are a professional athlete!

How much do you work on day to day nutrition for the club?

Chef de Cuisine John DiGiovanni, who oversees all of the food preparation for both the Time Warner HD Lounge and all catering events in the arena (including team meals), works very closely with Coach Collins and the rest of the coaching staff on menus that meet the nutritional guidelines they set.

Will you be offering cooking advice to the team in general this season?

There have been discussions about offering the class to the veteran players when training camp opens, and we have already had several arena employees ask if we would be willing to do a class for them!

I have heard a few, but out of respect for the privacy of the players, I'll have to keep them to myself.

I am going on my seventh season with Delaware North Companies Sportservice at Nationwide Arena, and the strangest request I have had thus far would have to be a cake. One of our guests was celebrating his birthday, and fancied himself a connoisseur of chicken wings, so his birthday cake was in the shape of a giant Buffalo chicken wing, right down to the orange hue!

What's your "perfect" meal for a hockey game as a fan?

To me, the food at a game is almost as important as the game itself! That said, I generally have a set "menu" when I go to a sporting event: a warm, soft pretzel; nachos; and a cold draft beer. If I am visiting another city, I also sample whatever local fare they offer - for example, Boog's BBQ in Baltimore or Italian beef in Chicago.

The key is portability. if you are sitting in your seat and Rick Nash scores a goal, you want to be able to jump to your feat to celebrate without juggling an unwieldy plate!

Thanks again to Chef Ed for taking the time to answer our questions!