Thought For The Day: Appearances Are Deceiving

Share All sharing options for: Thought For The Day: Appearances Are Deceiving 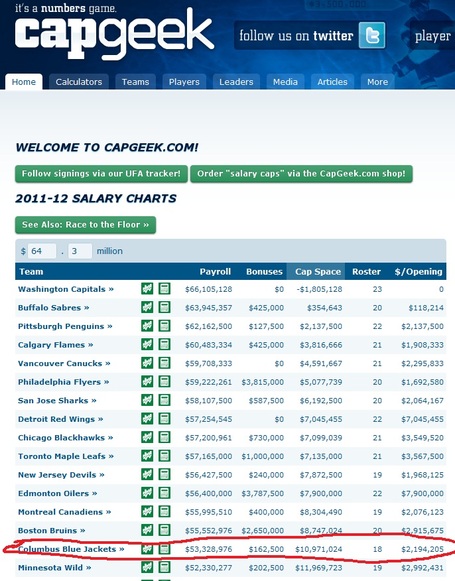 When one goes out to Capgeek to try and predict teams that the Blue Jackets might trade with, or just to see how the salaries are shaking out across the NHL, it's tempting to say that Jackets are in a great position for next season. After all, with the team only expected to look for one more blueliner, and probably one coming in at a discount at that, the team is looking at nearly $11 million in cap space even after the Mike Commodore and Duvie Wescott buyouts.

But looks can be deceiving, because what we're looking at isn't really the entire picture.

Let's start with that talk of a 2nd pairing d-man. Scott Hannan, repeatedly mentioned in possible targets, is a (justly) well regarded target...but how much will he be making, if he signed a deal to come to Columbus?

In his previous contract, he was on a 4 year, $18 million deal. Though his offensive numbers have declined from the back to back 24 point seasons in San Jose that helped him earn the previous deal when he went to Colorado as a UFA, his defensive numbers have remained solid (with the exception of a horrific -21 during the '08-09 season), and he's continued to be a heavy minute muncher at 5 on 5 and a leading force of the Colorado and Washington Penalty Kills. While it's possible he'll take a discount, given that he's still sitting on the market, it's doubtful he'd want much less than a cap hit of $3.0 million, similar to the deal Marc Methot recently signed, though it's entirely possible the Jackets would sign him for a smaller term.

Even if Hannan isn't the guy, I find it hard to believe the team will get a veteran 4/5 d-man for much less than $3 million, which would likely leave the Jackets sitting with just under $8 million in available cap space going into the start of training camp, leaving them a healthy cushion in case they want to make a deal at the trade deadline as part of a playoff push, right?

Well, no, actually. Let's back up.

The Jackets currently have 11 forwards returning from last season who are expected to play at the NHL level, including the acquired Jeff Carter. While we believe the top six is fairly set (Nash, Carter, Huselius, Umberger, Vermette, Brassard), the bottom six is a bit more of an open question - in particular because even assuming that Matt Calvert continues to develop and can slot into a third line with Samuel Pahlsson and Derek Dorsett, that still leaves us with only two other forwards - Jared Boll and Derek MacKenzie.

Received wisdom from around the fanbase and media suggests that final spot might go to 2010 draft pick Ryan Johansen - and indeed, he appears to be ready to earn that spot. But that will come at a cost. Johansen's entry level deal and bonuses would consume another $1.945 million against the cap, taking the team down to about $6 million in cap space.

But, still, that's enough for an impact player if one comes up, right?

Probably, but we're forgetting one other hole in the roster.

The #7 slot on defense is also currently open, and it's been suggested that several players (John Moore, David Savard, Aaron Johnson, Nick Holden) will be competing for that slot. Depending on who claims that space on opening day, it could range from another $550,000 (Johnson) to $965,000 (Moore) consumed. In a "worst case" (ie: Moore), that leaves the team with about $5 million left - and even if J.P. McConnell and Mike Priest are open to paying to the cap, Scott Howson is going to need to leave some cap room to handle injury callups - he doesn't want to be caught in a situation like Calgary a few years ago where the team was playing with 5 d-men because they simply couldn't afford to call up a sixth or seventh.

I'm not saying that Scott Howson shouldn't pursue a veteran d-man (and potentially a veteran pricetag) if it's the right move to make the team better. More power to him, in fact. But many people think Columbus might be a major trading player this season, particularly with the cap troubles of teams like Buffalo and Washington, and in this case, the numbers on the page don't necessarily add up to the reality of what the Blue Jackets can really afford - and if the team does make a solid playoff push, don't be surprised if the argument is less about adding one more piece of the puzzle, and more about not wanting to mess with what's working.