Boll Vs. Dorsett - By The Numbers

Share All sharing options for: Boll Vs. Dorsett - By The Numbers

One of several offseason debates for Jackets fans is going to be the makeup of the bottom six. Many feel that Matt Calvert, Sammy Pahlsson, and Ryan Johansen are "locks", but that leaves three more slots to fill, and some very different choices to fill them depending on how you want to make use of the team. Another skilled line might benefit from scoring options like Tomas Kubalik or Cam Atkinson. Maksim Mayorov or Derek MacKenzie could offer some speed and checking ability. And then there's the question of Jared Boll and Derek Dorsett.

On the surface, both appear to be playing a very similar game - physical play, big hits, agitation, and when needed, dropping the gloves either to answer insult or defend other players. Because of the differences in their games and personalities, however, Boll has earned a bit more of a "hero" rep, while Dorsett is loved by many fans, but frustrates others by apparently badly timed penalties and a perceived lack of skill.

I decided to try to look, statistically, at what each of them brought to the table. Then I figured out that I wasn't strong enough on the math to do a good job,so I reached out to Robert Vollman of Hockey Prospectus, who we've used as a resource before when doing prospect research.

Robert did some digging, and I think you'll find the results interesting, so I'll let him take it from here!

In today's NHL is harder and harder to reserve too many spots on your roster for tough guys and enforcers. Few teams would dare to play a game without someone that can protect their stars, but it comes at quite a price. For every thug on your roster playing a handful of carefully-selected minutes, you need to have other players prepared to play longer and tougher minutes, other players capable of killing off his penalties, not to mention a more talented youngster willing to wait down in the AHL for another spot to open up. That's why few teams dress more than one enforcer (if any) in the NHL playoffs, and it's also why Columbus may soon need to choose how many of them to have - and which ones.

The best kind of enforcer are the ones who are capable of carrying their defensive load, and who don't get you into too much penalty trouble by drawing as many as they take. You can tell who is playing the tough minutes and who is getting the easy sheltered time with an OZQoC Chart ("Oz-Coke"). OZQoC tells you the situations in which a player is being used in two parts:

In the top right-hand quadrant are good defensive players like Sami Pahlsson and Jeff Carter, who start at least half their shifts in their own zone, and face above-average competition. In the bottom left-hand quadrant are those sheltered players like Derek MacKenzie and Derick Brassard, starting primarily in the offensive zone, and against below-average competition. 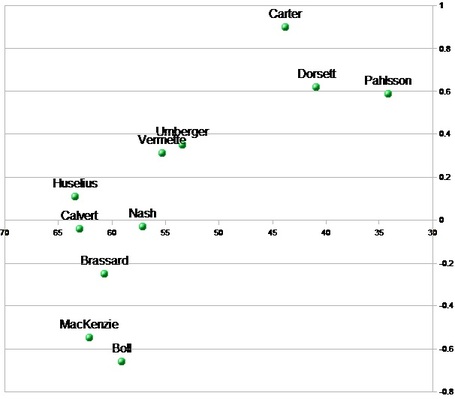 According to his OZQoC, Derek Dorsett plays the tough minutes, 11.6 per night at even strength, and even 1.6 more killing penalties. He even draws more penalties than he takes, 1.5 per 60 minutes compared to 1.1.

On the other hand, Jared Boll plays the soft minutes, and only 7.6 minutes per night, all at even-strength. That leaves longer and tougher minutes to the other players. Like Dorsett he draws more minor penalties than he takes, but by a smaller margin: 1.2 to 0.9 per 60 minutes.

Last year Dorsett's most common opponents were tough top-line players like Chris Stewart, Jarome Iginla, David Backes, Patric Hornqvist and Patrik Berglund. Jared Boll's most common opponents included Justin Abdelkader, Colin Wilson, and Jordin Tootoo. From that, who does it sound like is capable of getting the tough assignments?

With Derek Dorsett the Jackets have a forward who can be relied upon to carry a regular shift against top opponents, regardless of situation, allowing the other forwards to play more often in the offensive zone, and against easier players. That gives him a huge advantage over Jared Boll, who requires the other players to play an extra 5 minutes a night, all against the top lines.