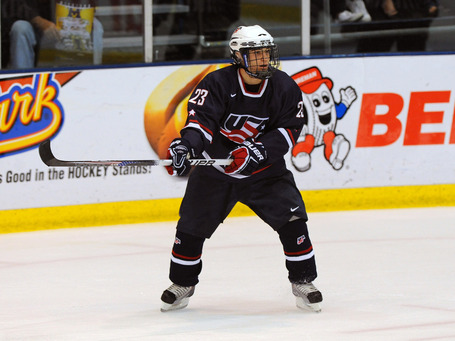 Arguably one of the most skilled forwards in the draft, Rocco Grimaldi has been an offensive powerhouse for the US NTDP, and will be taking his talents to the University of North Dakota this fall. An explosive skater with lightning quick speed and great hands, he has exceptional vision, but his size is a real concern. A lot of people compare him to Brian Gionta and Martin St. Louis, and he'll need to play with that level of game breaking skill and energy if he hopes to make it into the NHL.

Easily one of the more skilled players available in the draft, Grimaldi has a proven track record of production at every level. Strong work ethic and dedication to the game have enabled him to develop skills in skating, passing, shooting and puck handling that could comprise a video on "How To...." All indications are that he'll keep developing as he moves up the ladder. The only obvious knock is his size.

Grimaldi has drive, a love for the game and very good vision and offensive hockey sense. A very quick stick, rapid-fire release and impressive power that he generates on a big, heavy shot that belies his size are all factors that make him one of the most dangerous scorers to come out of the U.S. NTDP in a few years. His ability to control the tempo of a game all speak very well for him.

With Ryan Johansen and Michael Chaput in their pipeline, the Blue Jackets are developing a good bit of talent in the middle, but there's nothing wrong with continuing to make it a position of strength. Despite his size, Grimaldi keeps finding his game and playing smart and skilled hockey. Though I admit his size concerns me, he would have a few more years to develop at UND before needing to worry about putting him into the AHL or NHL, and that might be enough to help him build up his body to withstand the rigors of the pro game. If Grimaldi should drop to #38, I could see Scott Howson making the decision to hope that Rocco's body can keep up with his drive and talent.