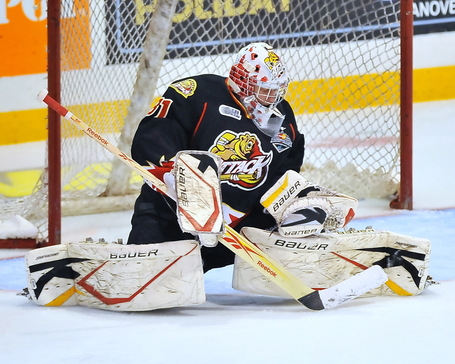 Photo courtesy of the OHL

The top ranked draft eligible goaltender in the OHL, Jordan Binnington backstopped the Owen Sound Attack through a playoff run that lead to their defeat of the Missisauga St. Michael's Majors to win the OHL championship before their eventual elimination in the Memorial Cup. After playing 22 games in his rookie season, he was expected to back up Scott Stajcer in net for the Attack this season, but took the starters' job after an injury and never looked back. A "positioning" goaltender more than an acrobatic one, he possesses great mobility and the ability to make some quick stops when he has to. In addition to being named to the Memorial Cup all star team, Jordan was also awarded the Hap Emms trophy for top goaltender.

He's still pretty lanky and his strength in goal and ability to go post to post and maintain good positioning needs some improvement, but he does have the ability to make acrobatic saves and has shown on a few occasions as a 16 year old, that he can single handily keep his team in the game.

Displayed above-average patience and quality controlled movements for a 17-year-old ... I consider him to play a calm butterfly style that relies more on positioning than reflexes ... Displayed a strong sense of sealing his pads to the ice ... Good absorption rate on many shots above the waist ... Solid patience when reacting, especially during a fast-paced first period ... Has a calm, composed demeanor and quiet footwork ... Does a good job of letting pucks come to him ... Has an above-average goalie IQ and did a good job of challenging in appropriate situations ... Needs a stronger and wider range of movement and more flexibility with his hip rotations ... Very solid puck-moving goalie that likes to be aggressive by making head-man passes ... His wide butterfly allows for solid lower-net coverage ... Calm body language a result of a calm, quiet mindset ...

Though Columbus has some strong prospects in net with Allen York and Mathieu Corbeil, there's no such thing as too much goalie depth. Binnington has seized the opportunity to play in Owen Sound, and if he keeps this up, I wouldn't be surprised at all for him to get international experience with Team Canada next season. With a goaltending style that would mesh well with new goaltending coach Ian Clark, he could be another ace in the hole depending on how things work out with Steve Mason.

Ironically, one of the only videos I found of Binnington in net (as opposed to giving interviews) is during a game where he comes in as a relief (the :59 mark of the video) in the midst of a blowout, but you still get a good look at him in the net and how he reacts to shooters.